Stocks fight back after third-quarter beating 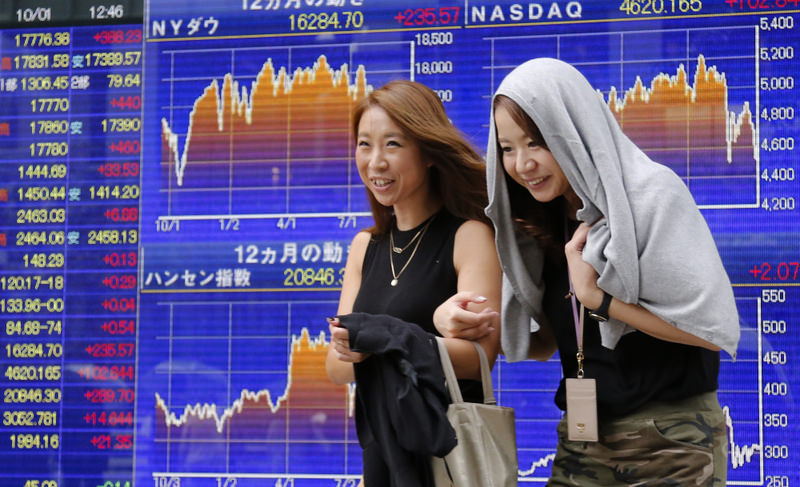 by reuters
Oct 02, 2015 12:00 am
World stocks and commodities rebounded on Thursday after a bruising third quarter, as surveys showed Chinese manufacturing activity was stronger than many global investors had feared. The Purchasing Managers' Index data nevertheless indicated China's manufacturing shrank again in September, suggesting the world's second-largest economy is still cooling more rapidly than expected a few months ago.

Relief the figures were not worse sparked 0.5 to 0.7 percent gains for Chinese stocks. But gains of nearly 2 percent by the Nikkei in Tokyo set the pace as all of

Manufacturing PMIs and weekly unemployment claims will set the tone for Friday's non-farm payrolls jobs data, which will feed the debate on a U.S. interest rate increase this year. "The clouds are clearing a bit. Overall, China is clearly slowing, but what does give me comfort is that its policy dashboard has a lot more buttons to press on it than ours in Europe," said Neil Williams, chief economist at fund manager Hermes in London. "I'm now expecting China to cut quite aggressively its interest rates and reserve requirements, and even move towards a fiscal splurge."

Europe's gains came despite weaker euro zone manufacturing growth, a slowing of new orders and price-cutting that underscored the region's sluggishness. The PMIs came a day after official data showed consumer prices fell again in September, adding to pressure on the European Central Bank to expand its stimulus programme, already set at more than 1 trillion euros.

In currency markets, the dollar rose slightly on expectations the Federal Reserve is still considering its first rate rise in almost a decade later this year. Along with the soft euro zone figures, that pushed the euro down to 1.1146. The Australian dollar, used as a proxy for China-related trades, had earlier risen 0.5 percent to $0.7058 following the China PMIs. "The Chinese data was just slightly better and this is lending some confidence to investors," said Neil Mellor, currency strategist at Bank of New York Mellon. "Having said that, euro/dollar is still stuck within familiar ranges."

Industrial metals seemed unaffected by another dive in the shares of commodity group Glencore. Worries about its investment-grade credit rating, which could affect its access to financing, rumbled on despite upbeat broker notes from its bankers, Citigroup, and also Barclays.

Three-month copper on the London Metal Exchange was up 0.2 percent at $5,175 a tonne after hitting two-week highs. Nickel hovered near a four-week high at $10,550 a tonne as safe-haven gold slid to a two-week low. Oil also headed higher. U.S. crude was up 2.2 percent at $46.11 a barrel even though data showed a surge in U.S. crude oil and gasoline stockpiles last week. Brent crude rose 2 percent to $49.30 a barrel. Europe's benchmark bond markets were largely steady as most investors eyed more ECB bond buying and waited for the U.S. jobs data on Friday. Emerging market stocks and currencies enjoyed the respite. MSCI's benchmark global EM index climbed 0.8 percent as the Brazilian real, Malaysian ringgit, Turkish lira, South African rand and Chilean peso all held their ground. "The market has simply become too negative, particularly on China," said Thomas Harr, head of EM research at Danske Bank.