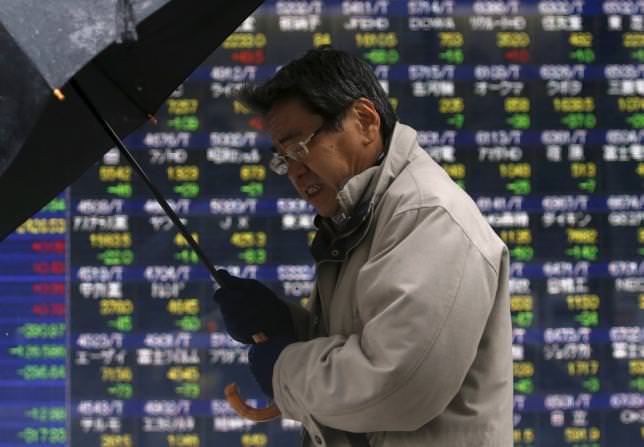 by reuters Jan 20, 2016 12:00 am
Asian stock markets slumped to fresh four-year lows on Wednesday as a relentless slide in oil prices snuffed out an attempted rally on Wall Street and dealt a further blow to global investors' appetite for riskier assets.

European stocks were expected to fall sharply at the open on Wednesday with financial spreadbetters predicting Britain's FTSE 100 .FTSE to open down 2 percent, Germany's DAX .DAXI to fall 2.4 percent and France's CAC .FCHI to slip 2.2-2.4 percent. U.S. crude wallowed at its lowest since 2003 after the world's energy watchdog warned the market could "drown in oversupply". U.S. futures CLc1 shed nearly 3 percent to $27.68 while Brent crude LCOc1 lost 2 percent to $28.21 a barrel.

In Asia, stocks surrendered all of Tuesday's rare gains with the MSCI's broadest index of Asia-Pacific shares outside Japan .MIAPJ0000PUS falling 2.6 percent on the day and hitting its lowest since October 2011.

"Sentiment seems to be to be extremely negative in the commodities at the moment," said Assad Tannous, head trader at Asenna Wealth Solutions in Sydney.

Leading regional stocks lower was the Hong Kong stock market .HSI with the benchmark index falling 3.7 percent on the day, its single biggest daily fall since early August, with all of its 50 constituents in the red.

Japan's Nikkei .N225 closed down 3.7 percent, leaving it 20 percent below last year's peak, meeting the technical definition of a bear market. The pain was felt widely with Australian stocks down 1.3 percent and South Korea .KS11 off 2.3 percent.

Chinese markets fared only marginally better than regional counterparts amid mounting talk that more stimulus may be on the way, possibly before the Lunar New Year holidays in early February.

December factory output, investment and retail sales data released on Tuesday were all weaker than expected.

The government-backed China Securities Journal reported that Beijing had the policy space for further easing to support the economy, including raising deficit spending to around 3 percent of annual economic output.

Yet such a move is usual before the holidays, and stopped well short of an actual cut in bank reserve ratios.

Wall Street had seen its early gains erased by the slump in U.S. crude. The Dow .DJI ended Tuesday up 0.17 percent, while the S&P 500 .SPX rose a single point and the Nasdaq .IXIC eased 0.26 percent. U.S. stock futures ESc1 were down 1.5 percent indicating a weak start.

The S&P energy sector alone dived .SPNY 2.17 percent. Oil at 12-year lows stokes fears of deeper losses for energy companies and the risk some may fail to pay their debts.

Tom Porcelli, chief U.S. economist at RBC Capital Markets, noted that polls showed investors were more bearish on Wall Street than at any time since mid-1987.

"Perhaps characterizing the recent bout of negativity as being 'pervasive' is an understatement," he wrote in a note.

Yet history showed that sentiment was darkest before the dawn.

"When investor pessimism reached these levels outside of an economic recession, the market was higher one quarter hence in every single instance, and up by an average of 6.4 percent."

With risk out of favor, sovereign bonds were in demand. Yields on U.S. 10-year Treasuries declined to 2.02 percent US10YT=RR and were down a massive 25 basis points since the new year began.

Other safe havens included the Japanese yen, which rose across the board. The dollar was dragged back to 116.93 yen JPY= from a top of 118.11 on Tuesday, while sterling hit its lowest since early 2014 GBPJPY=.

The pound had already been under fire after Bank of England Governor Mark Carney said he had no "set timetable" for raising rates, sending it to a seven-year low of $1.4127 GBP=.