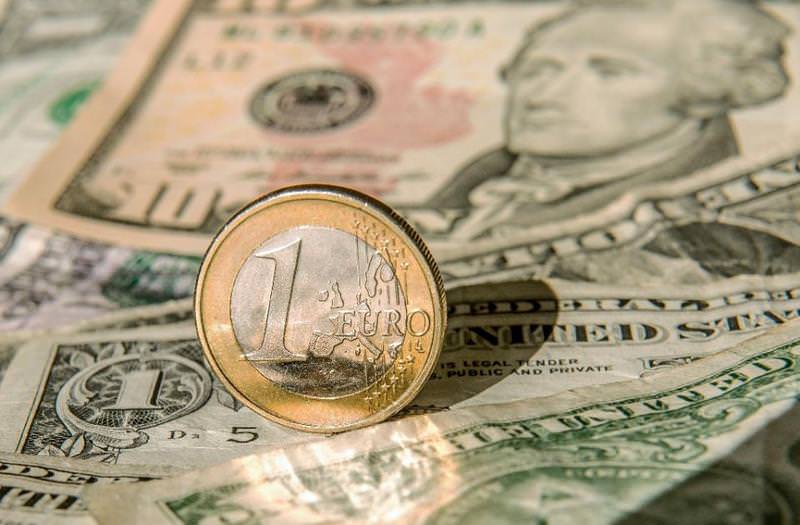 The U.S. dollar hit its lowest level against the euro since October and wiped out recent gains against the yen. (AFP Photo)
by Feb 03, 2016 12:00 am
U.S. and European stocks came off their lows on Wednesday, helped by rebounding oil prices, while a soft report on the U.S. services sector weighed on the dollar by making future rate hikes appear less likely.

The U.S. dollar hit its lowest level against the euro since October and wiped out recent gains against the yen. A top Federal Reserve official said the weakening outlook for the global economy and any further strengthening of the dollar could have "significant consequences" for the U.S. economy.

The U.S. economy's service sector expanded in January at a slower pace than the previous month, according to the Institute for Supply Management. Investors had been encouraged earlier in the session by data from a payrolls processor that found U.S. private employers added 205,000 jobs in January, above economists' expectations.

"There is ongoing concern reflected in the market today, and maybe yesterday, about the slowdown in the manufacturing sector spreading to the consumer side of the economy," said Jim Paulsen, chief investment officer at Wells Capital Management in Minneapolis.

Data showed euro zone businesses had a disappointing start to 2016, with growth in January matching the worst seen last year.

Equities have been tightly correlated to oil in recent weeks as the commodity's 1-1/2-year slide has deepened, with investors worried that oil's slide is a sign of shakiness in the global economy.

Oil rose after investors took advantage of a drop in the U.S. dollar and earlier weakness in the crude price, despite weekly data showing a surprisingly large rise in U.S. inventory. Russia also repeated its willingness to take part in talks with OPEC producers to cut output.

Financial conditions have tightened considerably since the Fed raised interest rates and monetary policymakers will have to take that into consideration should that phenomenon persist, William Dudley, president of the Federal Reserve Bank of New York, told MNI in an interview.

Dudley's comments, combined with the ISM data, raised skepticism about the Fed's ability to further raise rates, weighing on the dollar.

U.S. Treasury yields fell to a one-year low after the ISM services data.