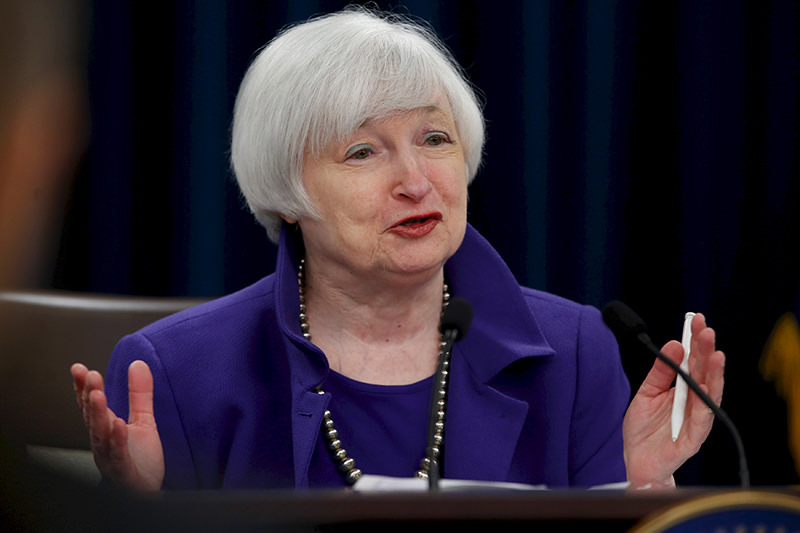 The Federal Reserve is keeping a key interest rate unchanged in light of global pressures that risk slowing the U.S. economy.

As a result, Fed officials are forecasting that they will raise rates more gradually this year than they had envisioned in December. The officials now foresee two, rather than four, modest increases in the Fed's benchmark short-term rate during 2016.

After Fed's announcement, the U.S. dollar dropped below 2.89 against the Turkish lira from 2.91.

The central bank said Wednesday that the economy has continued to expand at a moderate pace but that the global economy and financial markets still pose risks. Offsetting the threats, the Fed said in a statement after a policy meeting that it foresees a further strengthening in the already solid U.S. job market. It also sees an eventual pickup in inflation, which has remained below the Fed's target rate.

Since raising its key rate from a record low in December, the Fed has held off on raising rates again given market jitters and a sharp slowdown in China.

Resuming its rate hikes too soon could slow growth or rattle investors again. This week, the government said that retail sales slipped in February and that Americans spent less in January than it had previously estimated. The report suggested that consumers remained cautious about spending despite a solid job market and lower gas prices.

In its updated forecasts, which reflects the views of the Fed officials who take part in the policy meeting, the Fed revised its outlook to show two rate hikes this year. The forecast is based on responses from all 17 Fed officials who participate in the discussions not just the 10 officials who vote at each meeting.

In a nod to the financial market turbulence that hit in the beginning of the year over concerns about falling oil prices and weakness in China, the Fed statement said, "Global economic and financial developments continue to pose risks."

It noted that "inflation picked up in recent months" but remained below the Fed's desired 2 percent target. It said prices were being kept low by the "transitory effects" of lower prices for energy prices and imports, which are cheaper because of a strong dollar.

The Fed has two mandates: To maximize employment and to keep prices stable. It has essentially met just one: In February, the United States added a robust 242,000 jobs roughly the monthly average for the past six months. And the unemployment rate is a low 4.9 percent, close to the rate the Fed associates with full employment.

Before further raising rates, the Fed wants to see more evidence that inflation is picking up. Its preferred inflation gauge did rise in January to a 12-month increase of 1.3 percent, faster than the scant 0.7 rise over the 12-month period that ended in December. But that's still well below the Fed's target.

The government reported Wednesday that core consumer prices which exclude volatile food and energy costs ticked up for a second straight month. Over the past 12 months, while overall consumer inflation has risen only 1 percent, core inflation has increased 2.3 percent, the sharpest 12-month increase since 2012.

Recent comments from Fed officials indicate that they differ on how to interpret inflation prospects.

Vice Chairman Stanley Fischer said last week that the Fed may "be seeing the first stirrings of an increase in the inflation rate something that we would like to see."

Fischer suggested that two factors that have been depressing inflation lower oil prices and a strong dollar, which reduces import prices may be starting to wane.

But another Fed board member, Lael Brainard, said last week that she saw "troubling indications" that inflation could dip again. She also said she worried that weakness in China, Japan and other places could slow the U.S. economy.