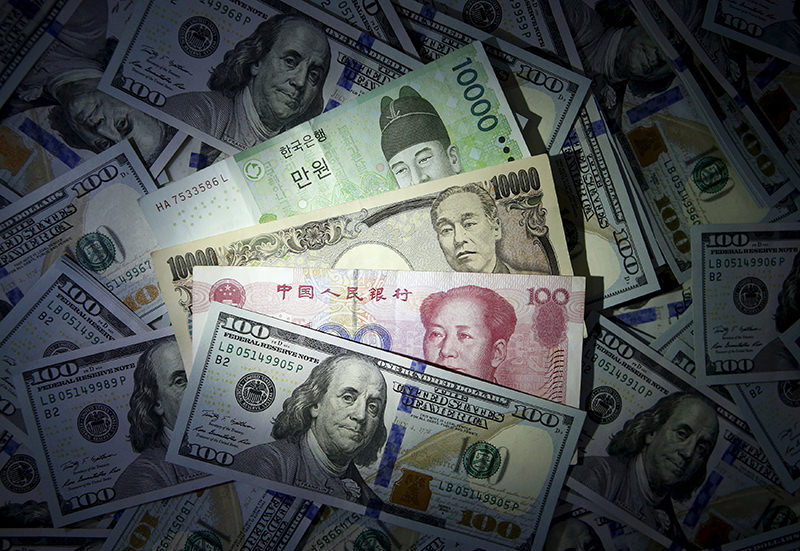 The dollar fell on Tuesday to its weakest against the yen since October 2014 and stock markets worldwide slumped, as investors pulled away from riskier assets following weak economic data out of Europe and the United States.

Wall Street followed declines across Europe and Asia and the MSCI All-World Index dropped 1.3 percent, putting it on target for its worst day since early February.

"The market is maybe giving up a little bit on the global growth story," said Thierry Albert Wizman, global interest rates and currencies strategist at Macquarie Limited in New York.

The Japanese currency, often sought in times of market turmoil or economic uncertainty, strengthened, with the dollar falling to 110.05 yen. Officials in Japan, including Bank of Japan Governor Haruhiko Kuroda, said overnight that the BOJ could provide more monetary stimulus such as pushing rates further into negative territory.

Further muddying the waters for investors, two senior officials of the U.S. Federal Reserve said the market's views of when the central bank would raise interest rates may be too pessimistic.

Just a week ago, Fed Chair Janet Yellen said the Fed would proceed cautiously in raising rates - remarks viewed as dovish and which drove U.S. stocks to 2016 highs.

Chinese shares bucked the trend, closing up 1.3 percent to 1.4 percent as trading resumed after a market holiday.

Oil, which fell in recent days on fading prospects of agreement among producers to curb oversupply, rebounded from earlier losses after data showing U.S. demand for gasoline declined in January for the first time in 14 months.

Gold, another perceived safe haven and a top-performing asset in the first three months of 2016, rose more than 1 percent. It traded at $1,229.11 an ounce.