Asia, Europe markets, emerging currencies on decline ahead of US jobs data 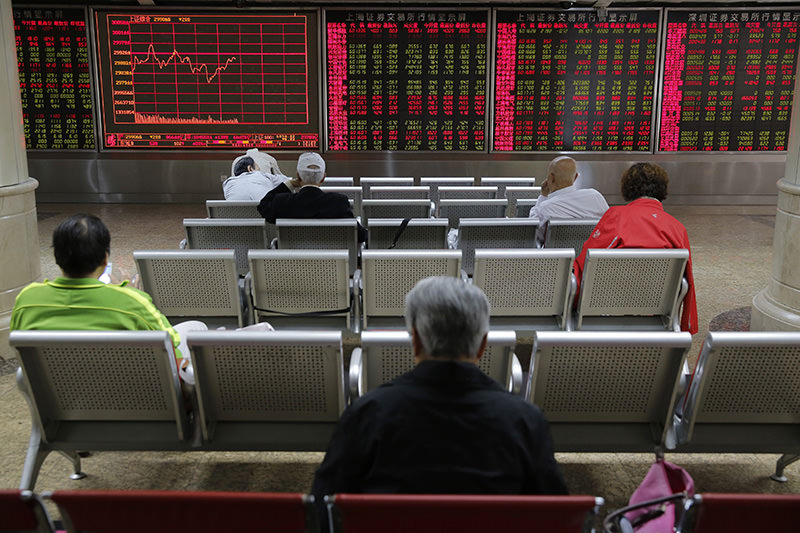 Stock markets in Europe and Asia struggled on Friday and only monthly U.S. nonfarm payrolls numbers stood in the way of shares globally racking up their biggest falls since mid-February.

Concerns over growth, the failure of extraordinary central bank stimulus and banking profitability in an era of negative interest rates, allied to a still tepid recovery in oil prices, has kept a lid on any optimism over the past month.

Money markets show investors have all but abandoned betting that U.S. and global growth will be strong enough to swallow further rises in official U.S. interest rates this year.

Yet with expectations of such rises at rock bottom, some more bullish talk from U.S. Federal Reserve policymakers and the chance that Friday's payroll numbers could support the case for a move as soon as June have at least halted sales of the dollar.

Stock markets in Europe lost half a percent in the first hour of trade, weighed down by a 4 percent fall in the world's biggest steelmaker Arcelor Mittal after first quarter results.

Shanghai shares fell almost 3 percent and Hong Kong by 1.7 percent, putting Asian markets at one-month lows and the MSCI world index on course for a more than 2 percent fall this week - its worst since the second week of February.

"Markets have been trading cautiously all week leading into payrolls and a big part of that is the renewed fear and uneasiness about global growth," said Deutsche Bank credit analyst Craig Nicol.

MSCI's broadest index of Asia-Pacific shares outside Japan fell 1 percent, set for a weekly decline of 3.3 percent, its biggest in 12 weeks. Japan's Nikkei, which resumed trading after Golden Week holidays, closed down 0.25 percent as the strong yen ate into corporate profits.

But job-related data published over the past couple of days has been softer than market expectations, casting a shadow on expectations of solid job growth.

Turkey's lira headed on Friday for its biggest weekly fall versus the dollar in over a year, sharply underperforming other emerging assets, as political uncertainty increased with the resignation of Prime Minister Ahmet Davutoğlu. His exit came amidst a weaker emerging markets backdrop, with MSCI's emerging equity index falling for the sixth straight session.

The index, down 0.8 percent on the day, is on course to end the week down over 4 percent, its worst performance since early January due to fresh fears that central banks are powerless to lift global economic growth.

"The lira was always vulnerable to domestic or external shocks," said Claire Dissaux, managing director for global economics and strategy at Millenium Global Investments. "What matters to investors is economic policy. We had a market-friendly cabinet and a market-friendly new central bank governor and if that changes this could be another story for the Turkish lira, not just short-term volatility," she said.

The Turkish lira slipped 0.2 percent and is set to end the week around 4.3 percent weaker against the dollar. Istanbul stocks fell 0.9 percent, on course for their biggest weekly drop since June 2013, with losses of over 8 percent. Local 10-year bond yields remain at one-month highs.

Turkish five-year credit default swaps (CDS) were at 269 basis points (bps), hovering near a two-month high touched on Thursday having added around 30 basis points over the week, according to data from Markit.

Standard & Poor's is thought likely to cut Turkey's rating at least one notch later on Friday. However, fears are of future downgrades from Moody's and Fitch, which rate Turkey investment grade.

JPMorgan, which runs the most widely used emerging debt indexes, advised cutting Turkish debt exposure citing the possibility of junk ratings from either of those two, which would cause significant investment outflows.

The losses were partly attributed to weak commodity markets, with copper set for its largest weekly loss since early 2015, and a plunge in steel and ore prices.

Oil prices have also lost almost 7 percent this week, and are now back below $45 a barrel.

Commodity exporters' currencies came under most pressure, with the Russian rouble and Kazakh tenge losing 0.5 percent and the South African rand down 0.3 percent.

The Polish zloty was the weakest performer amongst the Central and Eastern European currencies, slipping 0.5 percent against the euro ahead of a rate-setting meeting at which the central bank is expected to keep rates at 1.5 percent.

Investors are also awaiting the outcome of Moody's Poland rating review on May 13. The country's rating was cut in January by S&P which said the ruling Law and Justice (PiS) party had weakened the independence of key institutions.

"With the political backdrop failing to improve since the S&P downgrade, our team still see material risk of a negative revision by Moody's," analysts at ING said, predicting the zloty to slip towards 4.50 per euro before the review.

"It will need a significant upside surprise from the jobs report for the dollar to change trend," said Yujiro Goto, a currency strategist at Japanese bank Nomura in London. "We expect gains in dollar/yen to be capped around 108 and similarly downside for the euro will be limited."