Anti-corruption lesson from the hub of illicit money 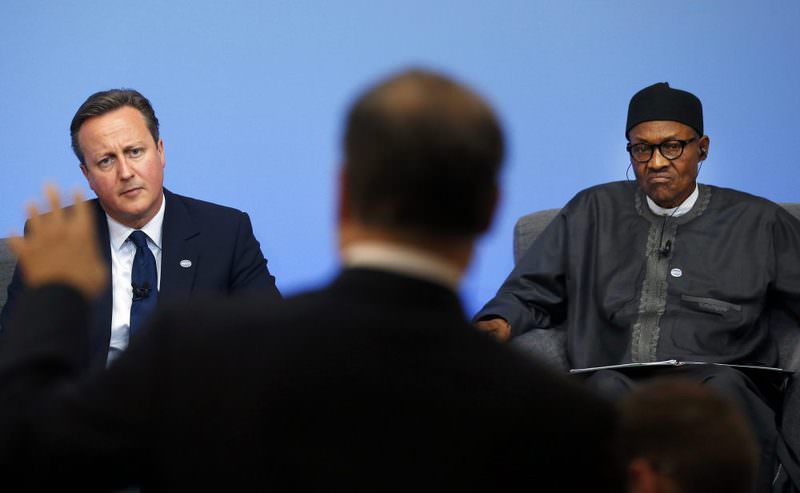 British Prime Minister David Cameron (L) and Nigerian President Muhammadu Buhari listen during a panel discussion at the Anti-Corruption Summit in London on Thursday. (Reuters Photo)
by Anadolu Agency May 13, 2016 12:00 am

British Prime Minister Cameron cited certain developing countries as the most corrupt based on a recent index. However, this statement is evidently contradicted by the reports and indices revealing the billions of pounds laundered in the U.K.

Ignoring the fact that millions of pounds have been laundered in London, British Prime Minister David Cameron prefers using the discourse of "look at the acrobat" by pointing to developing countries.

Government representatives of nearly 70 countries are meeting at the Anti-Corruption Summit in London today. Prior to the summit, statements exchanged between British Prime Minister Cameron and Queen Elizabeth II were quite attention-grabbing. Cameron, citing Nigeria and Afghanistan as "the most corrupt countries in the world" based on Transparency International's most recent Corruption Perceptions Index, has led to the question: "What about the U.K.?" Is the U.K. really in a position to teach anti-corruption lessons to the world?

London is the largest global finance center. According to the Global Finance Centers Index by the Z/Yen Group and Long Finance, London was ranked at the top, beating out New York City and Hong Kong, which were among the largest global finance centers last year. Yet data suggests that corruption, money laundering and tax evasion are conducted using sophisticated methods in the U.K.

According to the National Crime Agency's (NCA) 2014 National Risk Assessment Report, published by the British government, millions of pounds are laundered in the U.K. every year through local finance institutions. The NCA report stressed that a significant part of the money laundering activities are conducted by local banks within the country. Taking advantage of the lax regulation by authorities, money laundering agents benefit from the loopholes in the system. According to estimations by U.K.-based anti-corruption nongovernmental organizations, 23 billion pounds ($33.21 million) to 57 billion pounds are laundered every year through the U.K. Transparency International London Research Unit Director Nick Maxwell summed up the current situations, saying: "Illicit money obtained from international crimes comes from all around the world, and passes through the British economy through leading sector professionals."

Tax havens are at Britain's service

According to the Financial Security Index's 2015 data, nearly $21 trillion to $32 trillion worth of financial assets are held in the countries around the world that paying low taxes or none. In other words, by extracting these financial assets from the current tax system, they are directed to alternative tax havens, which are predicted to launder $1 trillion to $1.6 trillion every year. Among the alternative tax havens are British overseas territories such as the Cayman Islands, British Virgin Islands, Jersey and Bermuda. For example, the Cayman Islands are the sixth biggest banking center in the world with assets worth $1.4 trillion. A total of 11,000 funding companies on the islands are predicted to have net assets worth $2.1 trillion.

The issue with tax havens was frequently brought up by Britain's Labour party leader Jeremy Corbyn at the British parliament last month. Stating that the government should warn administrations of these tax havens about abiding by British tax laws and not being havens for the tax evaders, Corbyn said direct administration of these islands could be added to the agenda if necessary. "These islands are not independent. They have self-governance; it is correct. But they are under the umbrella of the United Kingdom. Therefore, they have to abide by British tax laws," Corbyn added.

Last month, the Panama Papers revealed that Cameron's father, who passed away in 2010, used the Mossack Fonseca law firm to shield his investments from the British tax system and operated an off-shore fund. Trying to dodge the matter by saying it was private at first, Cameron had to explain the tax declarations after thousands of protesters assembled in front of his official residence. Information regarding Cameron's offshore operations was available as early as 2012. Ian Cameron, who passed away at the age of 77, was the director of a company called Blairmore Holdings, which operated investment funds in the Bahamas. The Panama Papers revealed the names of six lords and three former Conservative party deputies as well as Cameron.

A Net Errors and Omissions (NEO) report indicates that nearly 113 billion pounds worth of capital without sources have reached Britain through different routes since the mid-1970s. For example, between 1993 and 2005, 43 billion pounds of off-the-books capital reached the U.K. This amount was 93 billion pounds between 2006 and 2015. According to experts, Russia has a 40 percent share in the influx of illicit money. According to Deutsche Bank's G10 currency index report, the U.K. is seen as a safe haven for foreign investors who try to shield their assets from local authorities and transfer their fortunes from unstable investment environments. And the sources of these influxes are countries such as Russia. Deutsche Bank London's market research strategist Robin Winkler said only about 1 billion pounds of off-the-books capital entered the U.K. every month last year, and added: "A huge part of it comes from Russia. A big part of Russian capital flows to the real estate market in London. These capital moves are not taken under the record by the statistics institutions."

HSBC on SwissLeaks and Panama Papers

According to the SwissLeaks papers leaked by the Washington-based International Consortium of Investigative Journalists (ICIJ) last year, the U.K.'s biggest bank, HSBC, allegedly helped its wealthy customers avoid taxes through more than 30,000 accounts in 10 countries. The Panama Papers suggested that despite international sanctions, HSBC continued providing financial service to Rami Makhlouf, the cousin of Syria's Bashar Assad, for a long time. French newspaper Le Monde said according to the Panama Papers, HSBC allegedly established 2,300 offshore companies through Mossack Fonseca. The British banks' role in the London Interbank Offered Rate (LIBOR) scandal still lingers in contemporary collective memory. Britain's Banking Supervision Committee fined one of Britain's prominent banks, Barclays, 290 million pounds on the allegation of manipulating the LIBOR interest rate and Barclay executive Bob Diamond had to resign in the aftermath of the scandal. In the following period, Britain's Financial Conduct Authority (FCA) began investigating Barclays, Citigroup, HSBC, JPMorgan Chase, the Royal Bank of Scotland (RBS) and UBS, which were involved in the LIBOR scandal, regarding their alleged manipulations of the foreign exchange market.
RELATED TOPICS