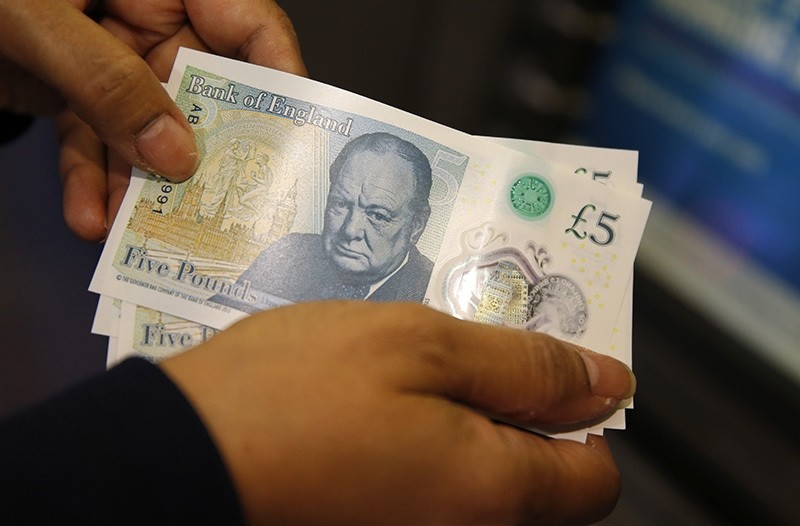 Amanda a member of staff at a branch of Halifax bank, in London, displays the new British 5 pound sterling notes, made from polymer, which were launched Tuesday, Sept.13, 2016. (AP Photo)
by Compiled from Wire Services Oct 04, 2016 12:00 am

The pound has dropped to a 31-year low as trading investors fret over the British government's suggestion it will focus on controlling immigration in its talks to leave the European Union, ahead of retaining close ties to the bloc's single market.

Investors have been selling the currency since a speech on Sunday by Prime Minister Theresa May, who said her government plans to start the process of leaving the European Union by the end of March 2017.

The greenback reached a 13-day high against a basket of major currencies, helped by gains against the yen and by an upbeat survey of the U.S. manufacturing sector that drove investors to increase their bets on a rise in U.S. interest rates by the end of the year.

The pound had already shed more than 1 percent the previous day on the back of British Prime Minister Theresa May's announcement on Sunday that the formal process that will take Britain out of the EU will start by the end of March.

It extended those falls on Tuesday, slipping more than half a percent to $1,2757, its weakest since June 1985. That left it down 15 percent since Britain's June 23 referendum on EU membership.

Many in the market worry that the government's stance points to a "hard Brexit", in which Britain quits the single market in favor of retaining control over migration, which could drive an exodus of banks from London.

"The headlines we've been seeing in the last few days...have been focusing the market's attention on the big structural challenges that the UK is facing, particularly if it's going to be 'hard' rather than a 'soft' Brexit," said HSBC FX strategist Dominic Bunning, highlighting a report suggesting that post-Brexit Britain would not be supportive of the financial sector.

While the turmoil in the days and weeks following the EU referendum spurred demand for safe-havens like the yen, analysts pointed out that the latest slide in the pound had yet to trigger similar reaction.

"Right now the reaction to Prime Minister May setting a departure deadline is mostly limited to the pound. A greater negative impact on the British economy will have been witnessed first for Brexit woes to cause broader risk aversion," said Masafumi Yamamoto, chief currency strategist at Mizuho Securities in Tokyo.

Some analysts said that the dollar had also been boosted against the yen in particular by a reduction in risk aversion, with worries about the stability of Deutsche Bank having eased for now.

While the British economy has showed signs of improvement in the months since the shock vote to leave, there are concerns about the wider long-term impact of the bloc losing its second biggest economy.

Japanese exporters were lifted by the weaker yen, which makes their goods cheaper and helps their bottom line.

Stocks were also up elsewhere in Asia, despite some early wariness after a surge Monday - fuelled by easing worries about German financial titan Deutsche Bank.

Hong Kong climbed 0.3 percent in the afternoon while Singapore rose 0.1 percent, and Seoul added 0.6 percent as investors returned from a long weekend break.

There were also healthy gains in Taipei, Manila and Bangkok.

Shanghai was closed for a holiday.