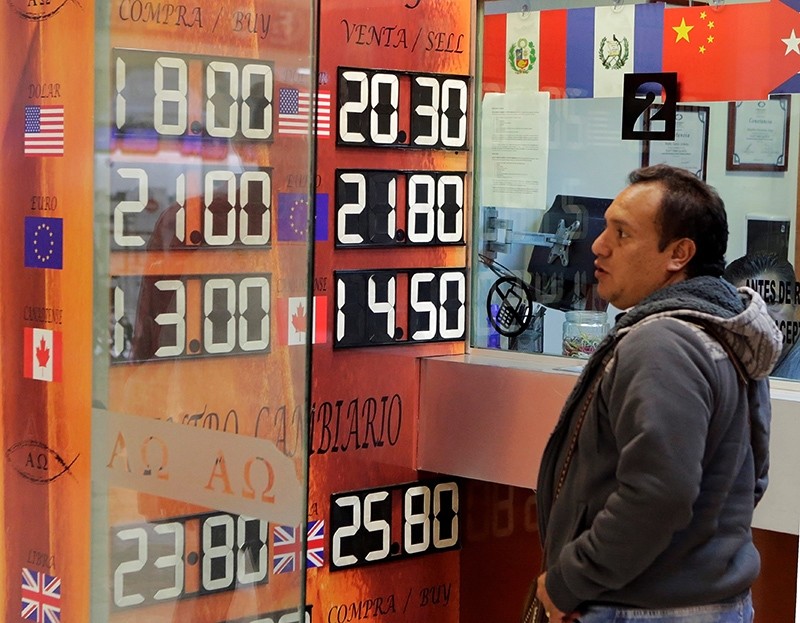 A board displaying the exchange rates of Mexican peso against the U.S. dollar and the euro is seen at a foreign exchange house at the international airport in Mexico City, Mexico November 8, 2016. (Reuters Photo)
by Nov 09, 2016 12:00 am
Mexicans bowed their heads in disbelief, the peso tumbled and the government prepared a response as Donald Trump, whose anti-immigrant rhetoric infuriated the country, won the US presidential election.

At an American barbecue restaurant called Pinche Gringo in Mexico City, a festive mood turned somber as Mexicans and Americans rubbed their necks and could barely utter a word as they watched television networks confirming Trump's victories in key states against Democrat Hillary Clinton.

"I feel very sad. It's a nightmare, with a lot of uncertainty about what's going to happen," said Erick Sauri, a 35-year-old architect, who wore a blue T-shirt reading "Hillary Clinton for President."

"For now we're already making less (money) than we making yesterday," Sauri said, referring to the national currency's fall to a record low.

The dollar was buying 20.78 pesos, eclipsing the Mexican currency's previous low of 19.93 set in September.

Mexicans have closely watched the US presidential campaign ever since Trump burst into the scene last year by calling migrants "rapists" and drug dealers.

Mexican Finance Minister Jose Antonio Meade and central bank chief Agustin Carstens were due to address the media early Wednesday to outline actions the government will take in response to the peso's fall.

Meade said last week he expected such market "volatility" if Trump won, while Carstens said the government had an unspecified contingency plan in place to weather the storm.

Foreign Minister Claudia Ruiz Massieu, meanwhile, cancelled a late night news conference. An official said she would speak after both Trump and Clinton have spoken.

In the runup to the election, Mexicans vented their anger in different ways, crushing Trump pinatas, burning his effigy and organizing an exhibit of cartoons mocking him as a Nazi or excrement.

Their president, Enrique Pena Nieto, tried a different approach, shocking many in his country when he met Trump at his official residence in Mexico City on August 31.

While the Mexican leader later tweeted that he had told Trump that his government would never pay for the wall, several analysts saw the visit as a mistake that helped Trump burnish his presidential image and Pena Nieto himself later admitted that the invitation was "hasty."

But his invitation may pay off now, since Pena Nieto said his goal was to open dialogue with a man who could become the next US president.

But that was little consolation to the Mexicans at Pinche Gringo, a Mexican-American-owned restaurant whose name refers to an insult lodged against Americans.

"I'm dismayed. It's incredible that so many people voted for a message of hate. It's like a bad dream," said Monserrat Valencia, a 25-year-old economist, who left the restaurant even before Trump was declared the winner.

But not all saw doom and gloom.

Carlos Arturo Fernandez, a 36-year-old Uber driver navigating heavy traffic on a rainy night, said things may not turn out that bad with Trump as US president.

"Whether it's Trump or Hillary, it can bring bad things and good things," Fernandez said.