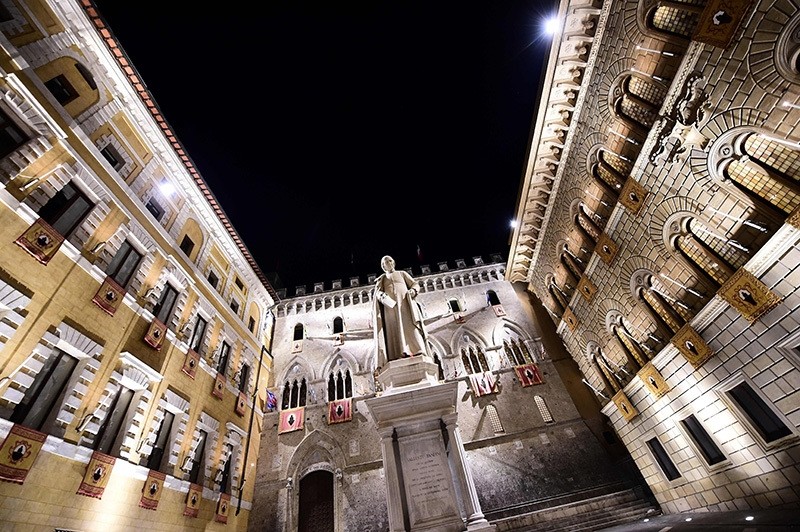 The bank, saddled with bad loans, needs to raise the money by the end of the month to avoid being wound down, but Italy now faces early elections after Renzi said he would quit to take responsibility for the defeat of his constitutional referendum.

Monte dei Paschi, rated the weakest lender in European Banking Authority (EBA) stress tests this summer, had planned to secure a firm commitment from one or more anchor investors and launch a share sale as early as Wednesday or Thursday.

BMPS, which is the world's oldest bank, has lost 84 percent of its market capitalisation since the start of the year.

The lender's shares fluctuated wildly in early Monday trade, with investment banks due to meet at around 1100 GMT to decide whether to back the cash call. Under a pre-underwriting deal, they can drop the transaction due to adverse market conditions.

The bank's board was expected to convene on Tuesday.

To ensure its survival, the bank has previously launched a plan involving the spinoff of 27.6 billion euros ($29.4 billion) worth of non-performing loans, combined with a capital increase of up to five billion euros. But the question is now whether lingering political uncertainty will scare investors off.

"If there is no solution to the government crisis within a couple of weeks, financial markets will start getting jittery again," said Lorenzo Codogno, a former Italian Treasury official and now a professor at the London School of Economics.

"Probably the capital increase of Monte Paschi will be postponed or outright cancelled, and all other operations would be stalled."

While investors focus mostly on BMPS for now, the rest of the sector is far from immune to further panic, analysts said, pointing to the Milan's FTSE All-Share banking index, which has lost 47 percent of its value since January.

The referendum result is adding to deep worries about the failure of the Italian banking sector -- which features no fewer than 700 banks -- to make meaningful progress towards consolidation. And this, despite non-performing loans on their books amounting to a combined 360 billion euros, roughly a third of the eurozone's total bad debt.

Renzi announced he would step down in the early hours of Monday after his constitutional reform was rejected by 59.1 percent of voters, a wider margin that had been expected.

Italian government bonds and shares fell sharply early on Monday, as investors worried that instability in the euro zone's third-largest economy could reignite a dormant financial crisis and deal a hammer blow to the country's fragile banking sector.

"We believe the 'No' vote makes it more difficult for Monte dei Paschi to find an anchor investor. Based on the size and valuation of the capital increase needed, the challenge looks sizable," Morgan Stanley analysts said in a note.

If Monte dei Paschi's plan fails, the Italian government is expected to step in and pump public money into the bank to avoid a crisis, bankers and European officials said.

This would entail losses for the bank's subordinated bondholders in line with tough European bank crisis rules -- something Renzi's government had sought to avoid at all costs.

Ahead of the referendum, BMPS managed to raise one billion euros via a voluntary conversion of bonds into capital. But all bets are off for the remaining four billion.

"The real risk lies with Monte dei Paschi di Siena. It's easy to imagine that investors who wanted to take part in the capital increase will now take a step back," said Umberto Borghesi, fund manager at Albemarle Asset Management.

"What is needed is a clear response on any government intervention, bail-in decision or any other solution," he said.

A "bail-in" forces existing creditors to write off part of their claims.

It was not immediately clear to what extent retail investors, who hold 2.1 billion euros of the bank's junior debt, could be spared in the event of a state rescue.

Even at the height of the euro zone's debt crisis, Italy had resisted calls to inject public money into its banks or ask for an EU bailout. But it is running out of private solutions to cure the sector, which is burdened by 360 billion euros of bad loans accumulated during a harsh recession.

Italy's 4.25 billion euro Atlas fund, hastily created this year to help channel private funds into struggling banks, has seen its coffers dry up as banking crises mushroom around it.

Two banks from the Veneto region that were rescued with a 2.5 billion euro capital injection by the fund in the spring need another 2.5 billion euros in fresh capital soon, analysts say. And four small lenders bailed out by healthier banks last year also need more money to clean up their balance sheets.

If investors really get cold feet, then UniCredit, Italy's biggest bank, could be the next giant to feel the pain, analysts said, as it undergoes a massive strategy review.

It hopes to raise up to 13 billion euros of fresh capital early next year and analysts agree that the outlook for UniCredit is still favorable as it could also sell assets to fill capital gaps.

In the meantime, smaller banks like Carige or Veneta Banca are in much more immediate danger of falling victim to the ongoing crisis, analysts say.
Last Update: Dec 05, 2016 6:26 pm
RELATED TOPICS