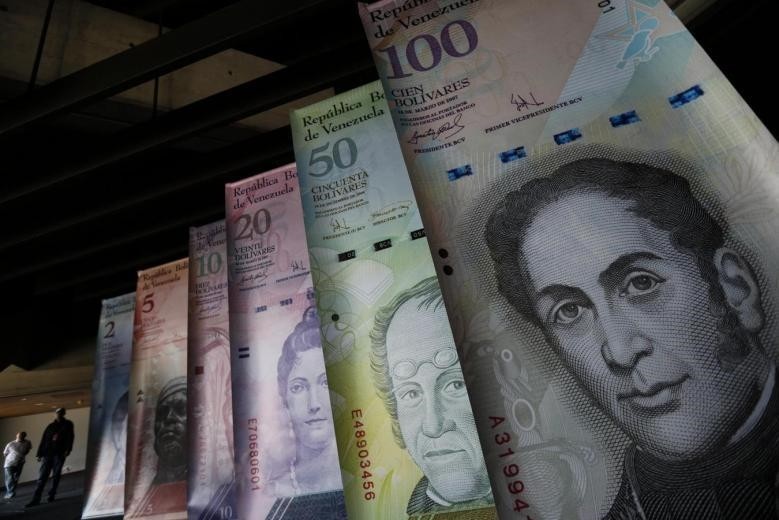 Samples of Venezuela's currencies are displayed at the Central Bank building in Caracas February 10, 2015. (REUTERS Photo)
by Associated Press Dec 05, 2016 12:00 am

Venezuela said it will issue higher-denominated bills as triple-digit inflation and a currency meltdown leave the country's largest note worth just around 15 Turkish liras or just 2 U.S. cents on the black market.

The central bank said in a statement Saturday that six new bills ranging from 500 to 20,000 Bolivars will begin circulating on Dec. 15. Currently the largest-denominated bill is 100 bolivars, while a 2-liter soft drink bottle can cost 25 times that amount.

The issuing of new bills comes as Venezuela is bordering on economic collapse. The currency lost 67 percent of its value on the black market last month, falling to 4,587 bolivars per U.S. dollar — the steepest monthly plunge ever, according to data by Dolar Today, which tracks the black market rate by monitoring transactions with the currency at foreign exchange houses across the border in Colombia.

Inflation meanwhile is soaring and expected to surpass four digits next year, according to the International Monetary Fund. Venezuela's government hasn't published price data since 2015.

Adding to the currency woes, cash has become impossible to find with ATM withdrawals capped at an extremely low amount and on Friday the nation's credit card payment system unexpectedly froze up for several hours.

President Nicolas Maduro blamed the malfunction on a "cyberattack" and ordered the Sebin intelligence service to raid the offices of CrediCard, which processes payment for Visa and MasterCard. He's also accused "mafias" in neighboring Colombia of trying to carry out an "economic coup" against his socialist-run economy.

"The right wing wants to impose on Venezuela a parallel exchange rate from an account in Miami, and from that account take the dollar to a disastrously crazy level," Maduro said in a televised address announcing the rollout of the new bills.

The currency meltdown comes amid what should've been a rare bout of good economic news for Venezuela after OPEC last week ceded to months of pressure from Maduro and other oil-dependent nations and decided to cut production levels for the first time since 2008. Crude prices rallied the most in five years as a result.

Venezuela has maintained strict currency controls since 2003 and currently has two legal exchange rates of 10 and 663 bolivars per dollar used for priority imports. On the black market, where people and businesses turn when they can't obtain government approval to purchase dollars at the legal rates, the bolivar has collapsed by a factor of five over the past year.