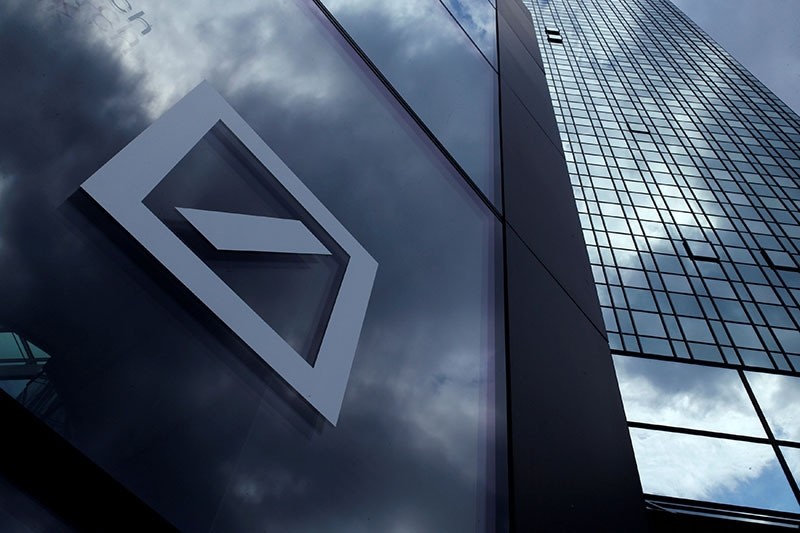 A Deutsche Bank logo adorns a wall at the company's headquarters in Frankfurt, Germany June 9, 2015. (Reuters Archive Photo)
by Compiled from Wire Services Dec 23, 2016 12:00 am

Deutsche Bank has agreed on a $7.2 billion settlement with the U.S. Justice Department over its dealings in mortgage-backed bonds, risky securities that helped start the global financial crisis. Credit Suisse also agreed to a similar settlement under which it would pay $5.3 billion

Deutsche Bank says it has agreed on a $7.2 billion settlement with the U.S. Justice Department to end civil claims over its dealings in mortgage-backed securities.

The fine is around half the amount Deutsche Bank had warned it might have to pay earlier this year — a possibility that weighed heavily on the share price of Germany's largest bank.

Deutsche Bank said the deal is not yet final.

The settlement would address the bank's issuance of bonds backed by home mortgages in 2005-2007.

Such bonds helped start a global financial crisis when the mortgages went into default and the bonds went sour.

In September, the US Department of Justice (DoJ) had sought an unaffordable $14-billion fine from Deutsche Bank, sparking fears the bank could collapse and destabilize the global financial system.

Hours after the announcement Friday, Credit Suisse said it too had struck an agreement with US authorities to pay almost $5.3 billion to settle disputes over the sale of subprime mortgage bonds.

A day earlier, the DoJ said it was suing British financial giant Barclays, accusing the bank of massive fraud in the sale of mortgage-backed securities in the US.

The rash of announcements comes as the outgoing administration of President Barack Obama is racing to complete investigations into the Wall Street firms that created and sold the risky mortgage bonds that led to the worst crisis since the Great Depression.

Authorities have already taken more than $46 billion in fines from six US financial institutions over their dealings in mortgage-backed securities.

However, the settlement does not resolve probes into whether the Deutsche Bank manipulated foreign-currency rates and precious metals prices, and allegations it facilitated transactions that helped investors illegally transfer billions of dollars out of Russia.

Deutsche Bank also faces civil lawsuits related to claims that its traders manipulated key interbank interest rates. It remains unclear how much it will cost the bank to wrap up these cases.

Barclays, Deutsche Bank and Credit Suisse were among several major banks implicated in the global financial crisis, along with Royal Bank of Scotland.