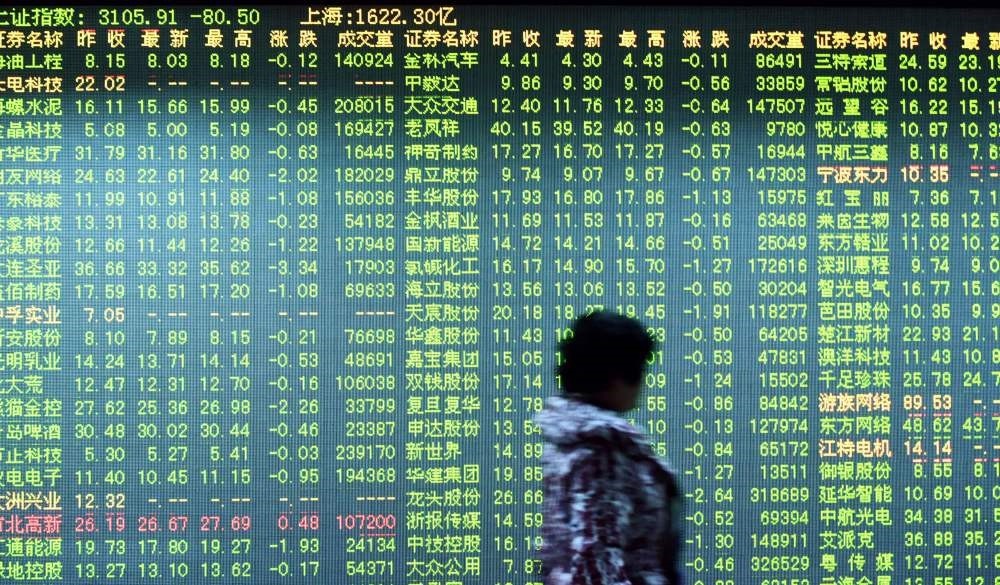 An investor walks past a screen showing stock market movements at a securities firm in Hangzhou in eastern Chinau2019s Zhejiang province.
by French Press Agency - AFP
Jan 19, 2017 12:00 am
China may allow foreign companies to launch IPOs on its stock exchanges and issue corporate bonds, the government said, after President Xi Jinping promised the world his country was committed to opening its markets. The State Council, China's Cabinet, issued a notice late Tuesday saying it had granted approval in principle for foreign companies to launch IPOs and issue corporate debt and other financing instruments in order to "support the widening of foreign companies' financing channels."

The announcement was the latest in a series of broad liberalisation pledges from China as it braces for the incoming administration of U.S. President-elect Donald Trump. Trump has repeatedly blamed China, and globalisation, for the loss of millions of U.S. jobs, raising fears of a trade war between the world's number one and two economies.

The State Council notice said foreign companies would face fewer restrictions in a range of sectors including services, manufacturing, mining, and others, much of which has been previously announced, in order to attract more foreign investment. It gave no further specifics or timing for the IPO and debt-market access for foreign companies, saying implementation will depend on the relevant regulations being drawn up. In a speech at the World Economic Forum at Davos on Tuesday, Xi warned against protectionism and promised China would continue to liberalise its markets, sketching out an alternative view to Trump's. But foreign companies and China's trading partners continue to complain about access to Chinese markets. China ranked 84th globally - behind Saudi Arabia and Ukraine - in the World Bank's ease of doing business index for 2016, and second to last in an OECD report on restrictiveness towards foreign investment. Last month China said it would allow foreign firms to operate fully-owned subsidiaries, rather than joint ventures, in sectors including rail transportation equipment and motorcycles, and loosen a range of other restrictions.