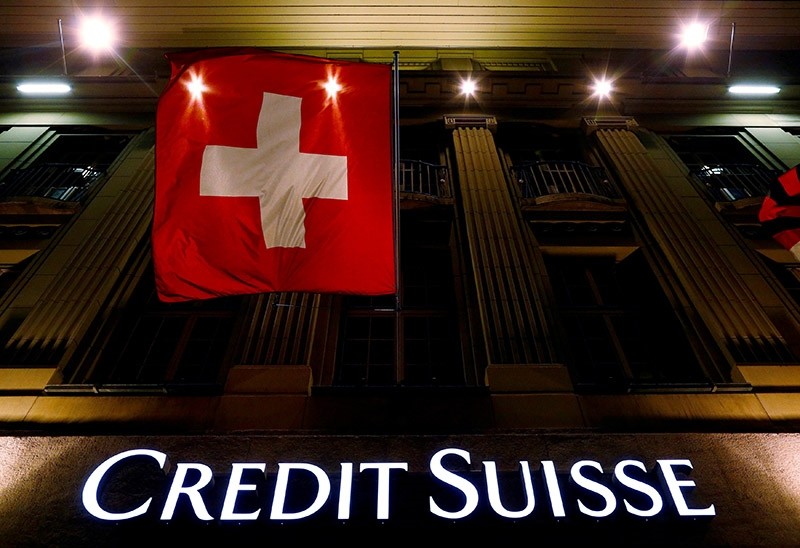 The logo of Swiss bank Credit Suisse is seen below the Swiss national flag at a building in the Federal Square in Bern, Switzerland May 15, 2014. (Reuters Photo)
by Associated Press Feb 14, 2017 12:00 am

Credit Suisse announced plans Tuesday to cut as many as 6,500 jobs this year in an "incremental headcount reduction," as the Swiss bank continues to rein in costs and change course after two years of losses.

The news came as the Zurich-based bank said that it had more than halved its fourth-quarter loss compared with a year earlier, amid a "challenging" global market and continued cost cuts, and after striking a multibillion-dollar settlement with U.S. regulators over its activities in the run-up to the 2008 financial crisis.

David Mathers, the bank's chief financial officer, said that Credit Suisse was targeting "net headcount reductions of between 5,500 and 6,500 across the bank" to further lower operating expenses to no more than 18.5 billion Swiss francs by the end of 2017, from 19.4 billion at the end of last year.

Mathers did not specify the types of positions or regions that would be most affected, but a Credit Suisse spokesman said in an e-mail that the focus would be "on contractors, consultants and other contingent workers" that the bank employs by the tens of thousands.

At the end of 2016, Credit Suisse counted 47,170 "full-time equivalent" positions, about 1,000 fewer than at the end of 2015. But it slashed overall headcount — including "contingent workers" like information technology specialists — by 7,200 last year.

In its earnings statement Tuesday, Credit Suisse said its net loss narrowed to 2.35 billion Swiss francs ($2.34 billion) in the fourth quarter, from 5.83 billion francs a year earlier. For the full year, the net loss dropped to 2.44 billion, from 2.94 billion in 2015.

The bank said it had set aside about $2 billion in the fourth quarter 2016 to help pay for what became a $5.3 billion settlement with the U.S. Justice Department, finalized last month, over claims that the bank misled investors about the quality of mortgage-backed securities that it sold before the 2008 financial crisis.

CEO Tidjane Thiam said the arrangement removes "a major source of uncertainty for our future."

"2016 was the first full year of implementing our new strategy and it was a challenging and busy 12 months," he said. "Thanks to our strong client franchise and the dedication of our teams, we have made good progress on our key objectives."

Revenues rose 23 percent to 5.18 billion francs in the fourth quarter compared with a year earlier, propelled by the best fourth-quarter performance for its investment banking and capital markets segment in four years.

Thiam said the bank had improved its capital ratio — a measure of financial health — and reduced costs by 1.9 billion francs during the year, above its initial target to save 1.4 billion francs.

Overall, depending on market fluctuations, 2017 looks "positive," he told a conference. The bank announced plans to propose a dividend of 0.70 francs per share at the company's annual general meeting on April 28.