Giant banks may withdraw from UK after elections 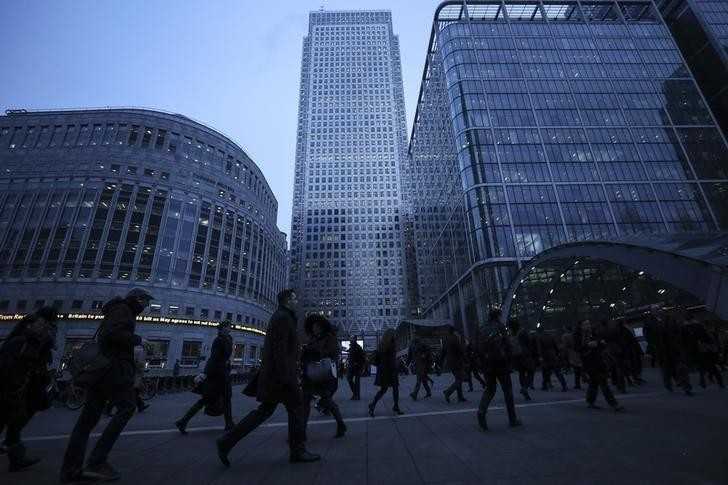 Workers walk to work during the morning rush hour in the financial district of Canary Wharf in London, Britain, January 26, 2017. (Reuters Photo)
by Anadolu Agency May 11, 2017 12:00 am

As the political rhetoric between the U.K. and the EU has become more acrimonious, the world's largest banks, which have been working on "contingency plans" for the past year, may withdraw from London in the summer

The U.K. is preparing for general elections scheduled for the upcoming month, but hopes for a new positive relationship between itself and the EU, including a free trade deal, are declining with every passing day. British Prime Minister Theresa May, who aims to strengthen her hand during the negotiations by boosting her power in parliament as result of the June 8 elections, is promising a "strong and stable" leadership. It is possible to say that May has fallen out with EU leaders during the recent period.

For instance, according to the British and German media, European Commission President Jean-Claude Juncker said, "I'm leaving Downing Street 10 times more skeptical than I was before," as he was departing from dinner at May's official residence on April 26. And the British press claims that Juncker told the German Chancellor Angela Merkel that May lives "in a different galaxy." Following this statement, May warned that the U.K. would challenge Juncker in Brexit negotiations with Brussels. The tone of rhetoric, which has stiffened before the negotiations begin, is disturbing the financial sector, which is awaiting a new deal with the EU.

While EU leaders suggest that it is impossible to complete a possible free trade deal with U.K. within the next two years, international financial institutions are concerned that access to the European market may be hampered.

Meanwhile, newly-elected French President Emmanuel Macron, who previously served as the country's economy minister, wants to attract financial institutions to Paris from London. Following his meeting with May in February, Macron said, "I was very happy to see that some academics and researchers in the U.K., because of Brexit, are considering coming to France to work. It will be part of my program to be attractive for these kinds of people. I want banks, talent, researchers, academics and so on."

In short, although May seems to have received landslide public support according to the polls published before the general election, a very challenging negotiation process lies ahead of the U.K. after June.

According to calculations made by the British Financial Times, the U.K. needs to pay nearly 100 billion euros because of its ongoing obligations to the EU, which has been already defined as "divorce indemnity" by the British media.

Previously speaking to the BBC, Juncker, had also stated that Brexit could cost nearly 50 billion pounds for the EU. However, Britain has refrained from voicing these figures before the negotiations begin. The hardening of rhetoric between the U.K. and the EU in the recent period is raising concerns for particularly London-based financial institutions.

Since the Brexit referendum last June, financial institutions have been pondering "emergency plans" and has been on the radar of leading financial centers such as Paris, Frankfurt, Dublin and Luxembourg.

The managers of the financial centers in these cities have been meeting with the bank and business executives in London and offer attractive package options, including investment and tax facilities.

Although financial institutions have not exited London in a massive way, they aim to secure themselves by transferring at least part of their activities to the EU as a result of a declining hope in the negotiation process.

Blankfein emphasized that Goldman Sachs employs about 6,500 people in the U.K. and that some of the employees could be moved out of the country as a result of the negotiations between the EU and the U.K.

Emergency plans are in place

Financial institutions in the U.K. are planning to move some of their operations to the EU in order to avoid the risk of losing access to European markets. According to the British press, it is thought that a total of 9,000 finance workers based in London will be moved out of the U.K. in the first instance.

t of the financial sector, it is important for the perception of the investment environment in the U.K.

If the banks put "emergency plans" in place, Deutsche Bank and UBS are expected to shift 4,000 and 1,500 of their employees respectively to their operations in the EU, while each of Morgan Stanley, Goldman Sachs and HSBC are expected to transfer 1,000 employees to the EU.

It is also reported that JP Morgan, Barclays, Citigroup, Royal Bank of Scotland (RBS), Nomura and Standard Chartered may shift 300, 200, 100, 100, 20 and 20 of their employees respectively to the EU. The financial sector already constitutes about 12 percent of the U.K.'s economy. Nearly 700,000 of a total of 2.2 million financial sector employees in the country are in London. According to the House of Commons' data, the annual contribution of U.K.'s finance and insurance services to the country's economy is approximately 126.9 billion pounds as of 2014. The British government earned an average tax yield of 21.4 billion pounds from banks from 2013 to 2014.
RELATED TOPICS