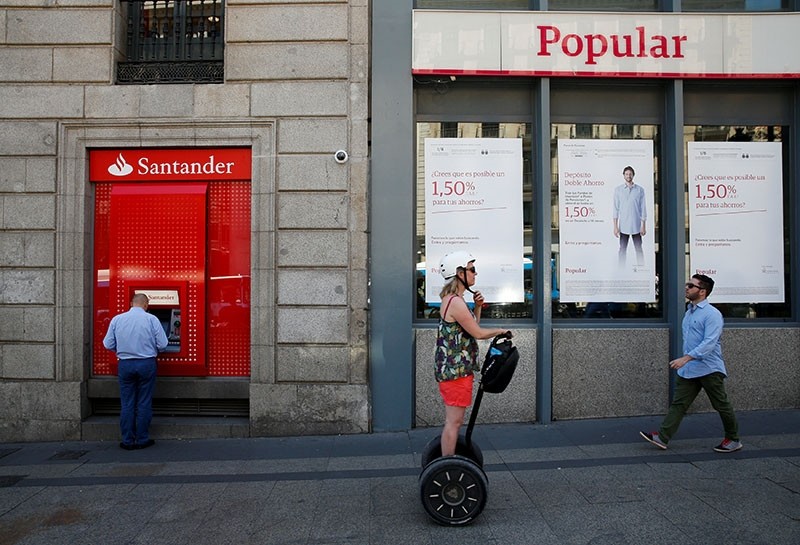 Santander said Wednesday it will take over all the shares in Banco Popular, which had lost more than half their value since last week as concerns grew about the lender's financial health. It will raise around 7 billion euros ($7.9 billion) in a share issue to strengthen Banco Popular's balance sheet.

The takeover was conducted in an auction sanctioned by European authorities after the main banking regulator in the eurozone, the European Central Bank, said Tuesday that it believed Popular was "failing or likely to fail."

It was the first time the ECB had pulled the plug on a bank since it was given new powers aimed at preventing the rescue of banks from overwhelming government finances, as they did during the eurozone's debt crisis.

European leaders agreed to move banking supervision to the EU level — so-called "banking union" — due to concerns that national regulators were too slow to flag problems at their home banks. The ECB took over supervisory responsibility on in November 2014.

As confidence waned in Popular, shares in the bank fell about 38 percent last week and another 20 percent this week, to 0.32 euros per share before regulators halted trading in its shares ahead of Wednesday's market opening. Popular had 305,152 shareholders as of the end of March.

The sale is "in the public interest as it protects all depositors of Banco Popular and ensures financial stability," said the European agency that manages failing banks in the 19-country eurozone, of which Spain is a member.

The Spanish government had previously ruled out bailing the bank with taxpayers' money. On Wednesday, Economy minister Luis de Guindos said the sale was "a good outcome" given the shortfall of the lender over the past weeks. The takeover "ensures the maximum protection for depositors and the continuity of the bank's activity," said De Guindos.

With the takeover, Santander becomes the largest Spanish bank by lending and deposits, reaching 17 million customers.

"The combination of Santander and Popular strengthens the Group's geographic diversification at a time of improving economic conditions in both Spain and Portugal," said Santander Chair Ana Botin.

Santander said that the deal would not materially affect the Santander's financial health and that it expected to generate returns on its investment of 13-14 percent in 2020.

Santander's shares fell 3 percent in early trading and then recovered to stand 0.4 percent lower at 5.77 euros.