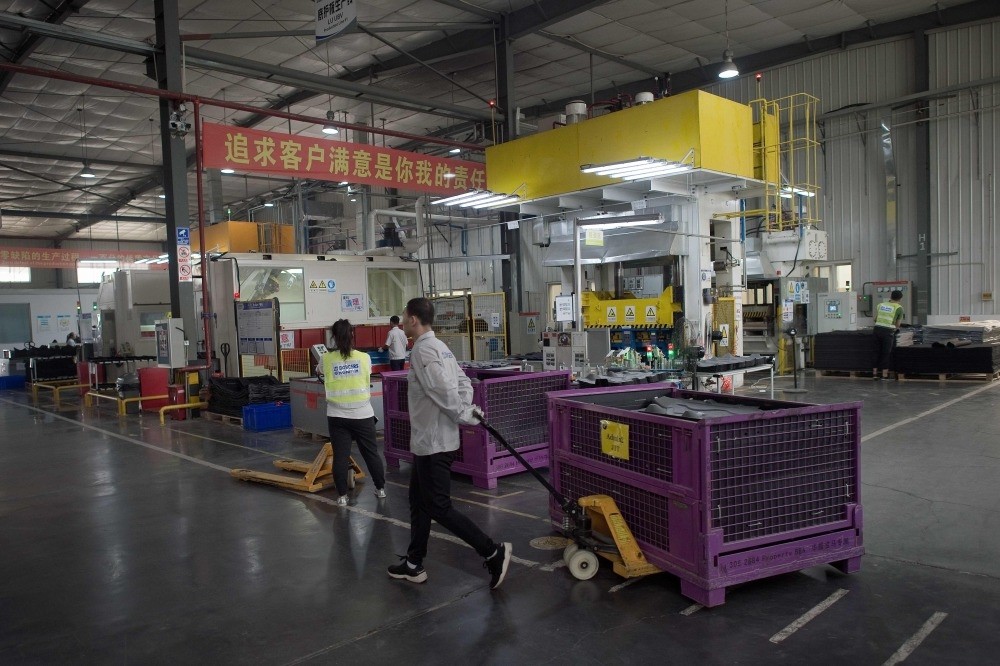 A worker pulls a trolley containing car interior pieces for a major European car maker in the American Industrial Park in Shenyang.
by Sep 25, 2017 12:00 am

Trucks carrying hi-tech car components rumble in and out the gates of an American industrial zone in the heart of China's rust belt - using roads that the city especially renovated for the complex. While foreign firms complain about being locked out of large swathes of China's vast market, the door has cracked open a bit wider in northeastern Liaoning province as the authorities seek to revive the recession-hit industrial region.

The bustling activity at the Shenyang American Industrial Park, which hosts international suppliers for global car brands, stands in contrast with the darkened windows and empty parking lots of the moribund Chinese factories nearby. Foreign firms feel more welcome in the provincial capital, Shenyang, and in parts of the southwest, than anywhere else in the country, according to a survey by the European Union Chamber of Commerce in China.

Elsewhere, companies are increasingly voicing frustration about investment barriers in sectors from automotive to finance, while China subsidises its own domestic businesses.

The EU business chamber issued an annual report on Tuesday saying companies were "suffering from accumulated 'promise fatigue'" as the government has yet to follow through on pledges to open the market. And while Liaoning is more welcoming, Kumpfert said that after setting up shop, businesses in Shenyang face similar obstacles, including lengthy waits for permits and "unclear" regulations.

Settling in China can also come at a price: at least one-fifth of EU companies said they have had to share their technology in exchange for market access in the aerospace, machinery, environment, auto, utilities and primary energy industries. Still, the chamber has observed an uptick in foreign entrepreneurs arriving in Shenyang in recent years.

Businesses that specialise in renewable energy, tourism, agriculture or advanced technology are well positioned to succeed in Shenyang as the city addresses pollution and undergoes a "painful restructuring process," Kumpfert said. The Liaoning Pilot Free Trade Zone was launched earlier this year, and construction continues in the 48-square-kilometer Sino-German Intelligent Equipment Manufacturing Park in Shenyang, which hosts BMW, Siemens and BASF. The city's Bureau of Foreign Trade and Economic Cooperation said data on foreign investment was not immediately available.

China's northeast has long relied on state-owned enterprises plagued with severe overcapacity in heavy industries that have crippled the economy, costing thousands of jobs.

Liaoning was the only province in the country that was officially in recession in 2016, with its economy contracting by 2.5 percent. The province also admitted to faking economic growth figures from 2011 to 2014.

"All these government projects have ignored principles of supply and demand and created all these problems," said Jason Lee, a director of business development for Eastern America, which bought the land from the city to build the Shenyang American Industrial Park.

"Nowadays, there is more government support for foreign businesses here. There's a lot to catch up on, but now they want to work with us as a team," Lee told AFP, adding that city officials sometimes accompany him to meetings to woo foreign clients.