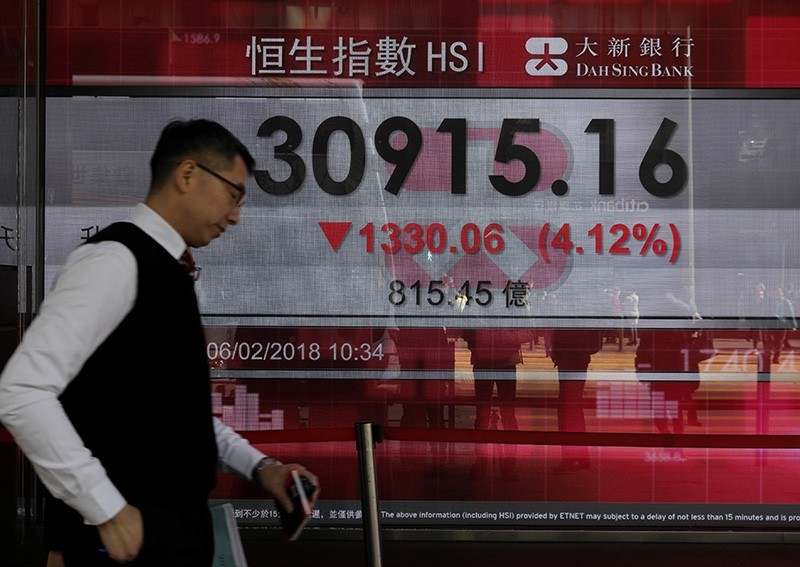 Tokyo led a collapse throughout the region, briefly diving almost seven percent before closing down 4.7 percent. Hong Kong was down more than four percent and Sydney and Singapore each sank three percent.

Other assets were also hammered, with a slump in oil prices scything energy firms, while higher-yielding currencies have been hit by a flight to safe havens.

Dealers tracked their colleagues in New York, where the Dow suffered its worst points fall in history and wiped out all its 2018 gains, while the S&P 500 also took a beating to sit down for the year.

Global stocks have enjoyed months of surges fueled by optimism over the U.S. economy, corporate earnings and the global outlook.

The winning streak was fanned by the passage of Donald Trump's massive tax cuts bill in December, which led several big-name firms to announce pay raises and bonuses.

At the same time the economy continues to improve across the board.

But while traders have been piling into equities, pushing many global indexes to record or multi-year highs, there has been growing concern on trading floors about elevated U.S. Treasury bond yields -- at four-year highs -- and the likelihood of fresh Federal Reserve interest rate rises.

Selling kicked in on Friday when official data showed another jump in U.S. jobs and a rally in wage growth, fueling fears that inflation will surge this year and the Fed will be forced to raises rates more than expected.

The so-called Vix volatility index more than doubled in U.S. trade on Monday.

"How far it goes down? You tell me," Steven Wieting, global chief investment strategist at Citigroup, told Bloomberg TV. You cannot keep up this speed of decline "day after day after day without finding some sort of bottom rather quickly", he added, predicting further volatility.

Energy firms were among the biggest victims, with Inpex losing more than four percent in Tokyo, while CNOOC, PetroChina and Sinopec were down between five and 6.5 percent in Hong Kong. Sydney-listed Woodside Petroleum was off nearly four three percent and BHP shed 2.7 percent.

Tech giants were also targeted after disappointing earnings reports from Apple and Google parent Alphabet. Tencent, Sharp and Samsung all got a bloody nose.

On currency markets the yen, considered a go-to unit in times of turmoil and uncertainty, climbed against the dollar. The greenback, however, rose against the pound and euro thanks to the rate rise expectations.

The commodity-dependent Australian dollar tanked one percent against its U.S. counterpart, while South Korea's won, Indonesia's rupiah and the Mexican peso were among the other big losers.

And bitcoin continued its spiral downwards after some banks banned their customers from buying it with credit cards. The news is the latest to hit the cryptocurrency after recent crackdowns by authorities in India, South Korea, China and Russia.

However, while trading floors are awash with red, analysts remained upbeat, saying the selling represented a much-needed correction.

Peter Garnry, head of equity strategy at Saxo Bank, who last month predicted a pullback, said: "We believe this is a healthy correction in equity markets but also likely short-lived as the higher U.S. 10-year yield is still not in the danger zone."

And Sean Fenton, a portfolio manager at Tribeca Investment Partners in Sydney, said: "I actually think there's buying opportunities, maybe not today, but through this week as this sell-off exacerbates."