India widens probe into $1.8B fraud in state-run bank 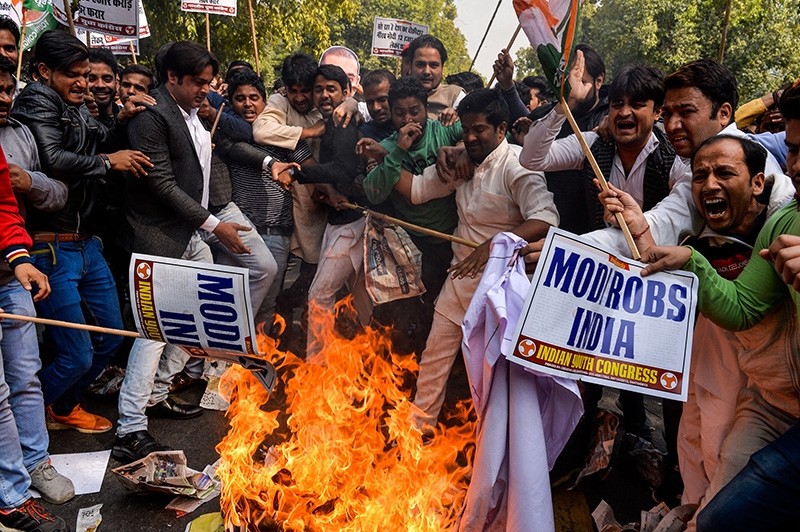 Indian supporters of the Congress Party shout slogans as they burn effigy of billionaire jeweller Nirav Modi in New Delhi on Feb. 16, 2018. (AFP Photo)
by reuters Feb 16, 2018 12:00 am

Indian investigators raided the offices of jewellery retailer Gitanjali on Friday in a widening probe into a $1.77 billion loan fraud at state-run Punjab National Bank, the biggest bank scam in the country's history.

The case is centered around diamond billionaire Nirav Modi who is accused of colluding with bank employees to fraudulently obtain advances for payments to overseas suppliers to his business stretching from New York to London to Beijing.

On Thursday, companies linked to Modi, who is out of India and whose whereabouts are not known, were raided and on Friday the federal police, the Central Bureau of Investigation (CBI) targeted the Gitanjali group of firms led by his uncle Mehul Choksi.

A police source said the CBI, in a new case, has accused the Gitanjali group of defrauding PNB, the country's second largest lender, of $763 million.

India's foreign ministry said it has suspended the passports of Modi and Choksi for four weeks, and has given them a week's time to voice objections to its plan to revoke the documents.

Searches were conducted at 20 places in six cities, including offices, factories and residences, linked to Gitanjali and its directors, the police source said.

Choksi, who is managing director of Gitanjali Gems Ltd , did not answer his mobile phone. Gitanjali Gems also did not respond to a request for comment.

Gitanjali has previously denied Choksi's involvement in the fraud and said he would take "necessary legal action" to get his name removed from the police case.

The biggest bank fraud in India's history has raised fears about the scale of problems in the banking sector that is already saddled with $147 billion of soured debt. India's banks recently received a $14 billion government bailout.

It has also provided an opportunity for Prime Minister Narendra Modi's critics to target the government for the loss caused to the state lender and accuse it of wrongdoing in high places.

Modi, the jeweller, was as recently as last month at the World Economic Forum in Davos where the Indian prime minister, who is no relation of his, was a star guest. Indian media carried a group photograph with Prime Minister Modi in the foreground and Nirav Modi grinning between rows of Indian business leaders behind him.

A group of members of the youth wing of the main opposition Congress party staged a protest in the capital New Delhi with placards that said "Modi robs India".

Modi has not spoken about the case so far. His flagship company Firestar Diamond says it has no involvement in the case.

The new CBI case names three of Choksi's companies, including Gitanjali Gems. The agency has alleged that two bank executives conspired to send unauthorised "letters of undertakings", or LoUs, to overseas Indian bank branches to release funds to accused companies' suppliers or clear their liabilities, the source said.

LoUs are issued by a bank giving some sort of a guarantee on behalf of a company. Other lenders give credit based on the LoU.

PNB had said on Thursday it has suspended 10 employees during the investigation into the fraud which had gone on undetected for years.

Shares in Gitanjali Gems fell 20 percent on Friday, while PNB, which has assets of $120 billion, sank for a third day and has lost more than a fifth of its market value since its disclosure earlier this week.

The state-run banking sector index was down 2.9 percent.

Indian banks, including PNB, have been stung by a surge in bad loans in the past four years, choking lending growth vital to accelerate the pace of expansion in Asia's third-largest economy.

Analysts said the fraud case was likely to cast a long shadow over the banking sector, particularly state-run lenders, several of which had also provided loans under the assumption they were being backed by PNB.

Union Bank of India, another state-run lender, said on Friday it has an exposure of $300 million as a counter-party lender. Axis Bank, a private sector lender, has said it has sold all its exposure related to the fraud.

With investors fretting over the extent of its liability, The Economic Times newspaper reported that India's central bank had directed PNB to pay the entire amount to counterparties.

Morgan Stanley estimated on Thursday if PNB had to assume all the liability from the fraud it would need 80 billion rupees ($1.25 billion) in additional capital, which at the stock's current valuation would mean a 14 percent dilution.