Latvian central bank boss will not resign over accusations of taking $125,000 in bribes 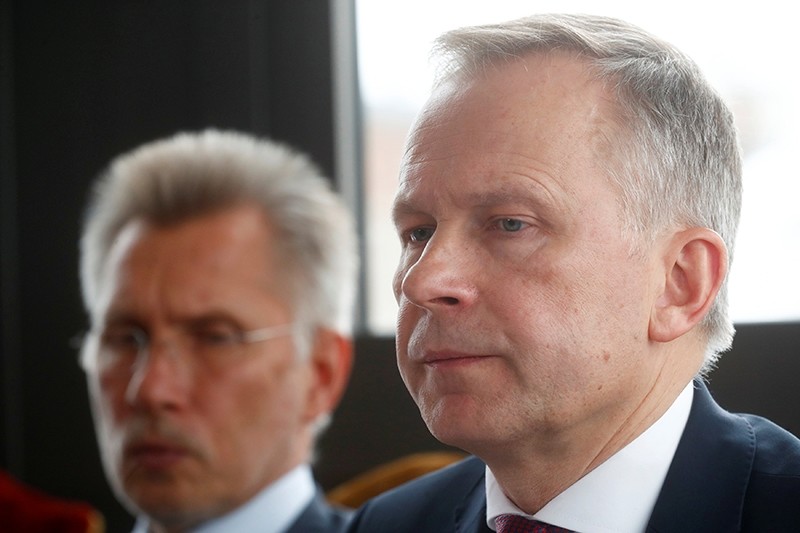 The head of Latvia's central bank said Tuesday he will not resign following an investigation into suspected bribery.

Latvia's anti-corruption agency said Monday that it suspects Ilmars Rimsevics of demanding and receiving bribes of at least 100,000 euros ($125,000) and has started a criminal investigation against him, though no formal charges have been filed.

Rimsevics, who is also on the European Central Bank's top policymaking council, said Tuesday he had "made a decision not to step down because I am not guilty."

The Associated Press reported Monday that the chairman of local bank Norvik, Grigory Guselnikov, says Rimsevics had asked for bribes since 2015.

At a news conference on Tuesday, Rimsevics said "my retreat would allow a man like Guselnikov to triumph."

On Friday, the anti-corruption agency raided the office and a property of Rimsevics and detained him on Saturday.

Prime Minister Maris Kucinskis said after an extraordinary Cabinet meeting Monday that the central banker will face "restrictions" to be announced later.

He was quoted by the Baltic News Service as saying: "At the very minimum, he will be banned from continuing in office."

Rimsevics has served as Bank of Latvia's governor since 2001. Latvia joined the euro-zone in 2014.

Meanwhile, Latvia's financial regulator has ordered the crisis-struck ABLV Bank to cease all payments on the request of the European Central Bank amid U.S. accusations of money laundering and breaching sanctions on North Korea.

The ECB said Monday that the Financial and Capital Markets Commission of Latvia has imposed "a prohibition of all payments by ABLV Bank on its financial liabilities" until further notice.

The ECB noted that ABLV has seen a sharp deterioration of its financial position in recent days.

Latvia's central bank said separately that it would loan ABLV 97.5 million euros ($121 million) against "a reliable pledge of highly liquid securities" instead of 480 million euros ABLV had requested.

The standoff risks destabilizing the country's financial system, as ABLV is Latvia's third-largest bank by assets.

The AP on Monday also published a photo that shows Rimsevics on a trip in Russia in 2010 that shows him in the company of the then-chief of a Russian military technology company.

Rimsevics said Tuesday that he did go on a fishing trip in the Russian region of Kamchatka in 2010 and that he knows nobody in the photo and that the picture was likely tampered with.

The Latvian banking chief claimed that he had become the target of some commercial banks in Latvia and that he had received death threats, which he had reported to the police.