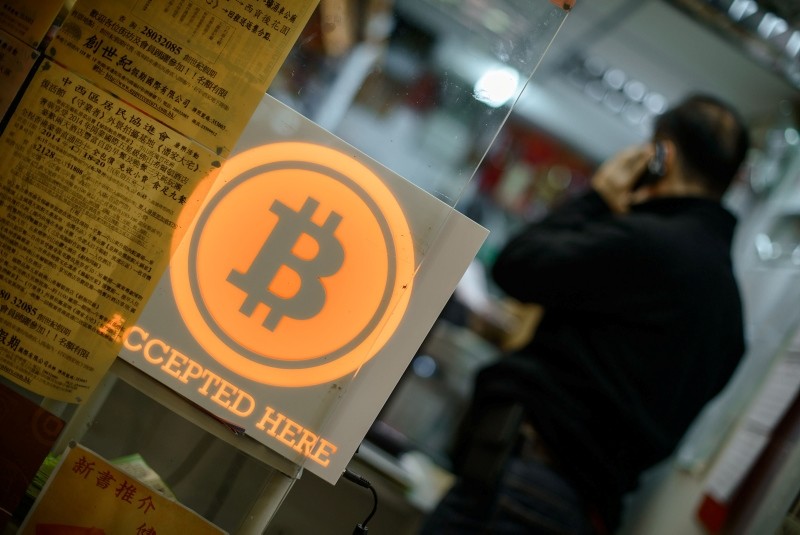 This file picture taken on February 28, 2014 shows a man talking on a mobile phone in a shop displaying a bitcoin sign during the opening ceremony of the first bitcoin retail shop in Hong Kong. (AFP Photo)
by Compiled from Wire Services Jun 11, 2018 12:00 am

Cryptocurrencies plunged in Asia on Monday after a hack on a South Korean exchange sparked fresh concerns about the safety of the digital units.

The attack on Coinrail comes months after Japanese firm Coincheck said it had lost more than $500 million in a January hack.

It sad hackers have stolen about one-third of the coins traded on its market, an announcement that sent bitcoin prices tumbling to a two-month low.

Coinrail did not specify the value of the currency that was taken in the attack at the weekend but said it was working with authorities and other coin developers to track down the culprits.

The firm, which trades more than 50 cryptocurrencies, added that it had frozen all exposed coins -- Pundi X, Aston, and NPER -- and other units had been taken offline in a "cold wallet".

It did not give a value but Yonhap News agency cited unnamed industry sources saying coins worth about 40 billion won ($37 million) were lost. If true, that would make it the biggest cryptocurrency theft reported to date in South Korea.

The news sent cryptocurrencies tumbling, with bitcoin losing about 13 percent, ethereum down 12 percent and ripple almost 20 percent lower as traders fret over the safety of their investments.

Bitcoin was trading at $6,780 on Monday, down from more than $7,500 before the weekend, according to Coindesk, which monitors prices.

"The markets are so thinly traded, primarily by retail accounts, that these guys can get really scared out of positions," he said. "It actually doesn't take a lot of money to move the market significantly."

Cryptocurrencies have plunged since the end of 2017, when bitcoin hit a record high near $20,000, having surged from less than $1,000 just 11 months earlier.

South Korea is one of the biggest markets for trading in digital currencies but the boom in their popularity has forced the government to tighten regulations, following similar moves in other countries.

Coinrail said it was cooperating with police and suspended trading. News reports said Coinrail, launched in September, was the seventh-largest exchange in South Korea by trading volume.

Japan in February carried out raids on a number of exchanges following the Coinbase hack, which exceeded the $480 million in virtually currency stolen in 2014 from another Japanese exchange, MtGox.