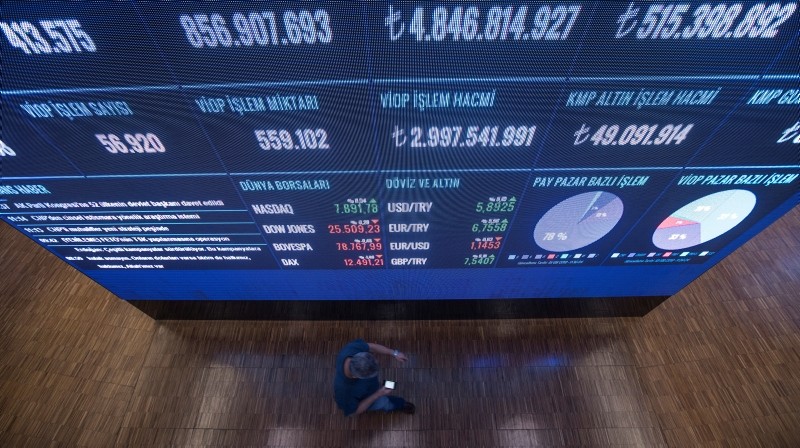 A Turkish trader walks under a display board during the morning session at the 'Borsa Istanbul' Stock Exchange in Istanbul, Turkey, 10 August 2018. (EPA Photo)
by Compiled from Wire Services Aug 10, 2018 12:00 am

Stocks are opening moderately lower on Wall Street Friday following steeper losses in Europe amid a widespread selloff in global stocks as the Turkish lira tumbles over a deepening rift with the United States.

President Donald Trump doubled tariffs on aluminum and steel imports from Turkey, deepening the currency's losses and raising concerns that the crisis could weigh on other economies.

"Problems in emerging markets are more important than ever because of the global growth engine that emerging markets have become," Peter Cecchini, chief market strategist at Cantor Fitzgerald in New York, wrote in a note.

"This will eventually matter greatly to U.S. markets."

Investors fled to safe-haven assets, with the dollar rising to a 13-month high and U.S. bond yields slipping to a three-week low. The Dow Jones Industrial Average fell more than 200 points.

Ten of the 11 major S&P sectors were lower, with bank stocks taking the biggest hit.

"Banks are leverage plays on the global economy. Anytime there's a sniff of contagion they will be weak," said Michael Antonelli, managing director, institutional sales trading at Robert W. Baird in Milwaukee.

JPMorgan, Wells Fargo and Bank of America fell more than 1 percent, weighing the most on the benchmark S&P 500.

Microchip's shares fell 10.5 percent, the biggest decliner on the S&P, after it forecast disappointing second-quarter revenue.

Bond prices rose. The yield on the 10-year Treasury note fell to 2.89 percent.

Data on Friday showed U.S. consumer prices rose in July and the underlying trend continued to strengthen, pointing to a steady increase in inflation pressures.

Bank shares across Europe also fell and the euro slipped to its lowest since July 2017.

Shares in France's BNP Paribas, Italy's UniCredit and Spain's BBVA, the banks seen as most exposed to Turkey, fell as much as 4 percent.

"People looking at things this morning are much more aware that there is central (major) contagion risk," said David Owen, chief European economist at Jeffries in London.

"Having said that, what's happening in emerging markets is leading to risk-free rates being bid for and that includes Treasuries, Bunds and gilts."

The MSCI All-Country World index, which tracks shares in 47 countries, was also down 0.6 percent on the day, having erased all its gains for the week. Wall Street was set for a weak open.

Investors are now awaiting the release of U.S. consumer price inflation data for July for clues on the interest rate outlook and to gauge if new import tariffs were starting to have an impact. The data is expected to show inflation increased 0.2 percent, after rising 0.1 percent in June.

The Australian dollar, often viewed as a gauge of global risk appetite due to its reliance on commodities, was the biggest faller among developed currencies, down 1 percent on the day. Going in the opposite direction was the safe-haven Japanese yen, which hit a one-month high against the dollar.

The dollar index, which measures the greenback's strength against a group of six major currencies, breached 96, taking it to its highest level since July 2017.

Adding to emerging market currency woes was the Russian ruble, which weakened to 67.12 to the dollar. Overnight it had retreated to its lowest since November 2016 on threats of new U.S. sanctions, weakening beyond the psychologically important 65-per-dollar threshold.

"Other EM currencies have held their ground against the dollar, having generally been weakening previously," said analysts at Capital Economics.

"In most cases though, we suspect that this resilience will prove temporary," they said, highlighting expectations of rising U.S. interest rates and worries over growing U.S. protectionism.

Despite the widespread flight to safe-haven assets, spot gold fell 0.2 percent to $1,210 per ounce.