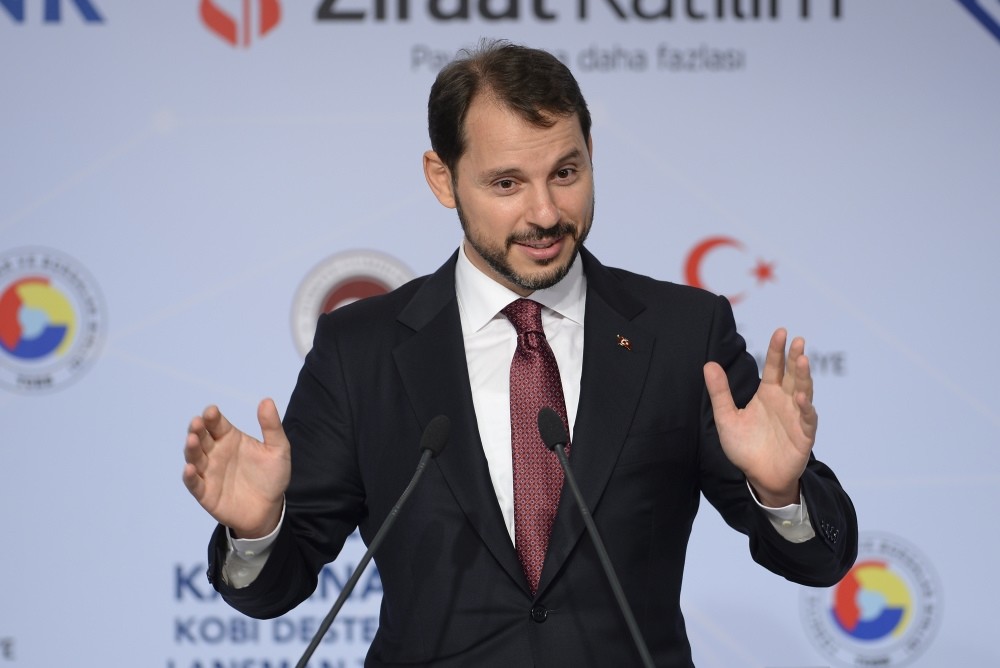 International rating agencies have been making intense efforts to create a pessimistic view of Turkey's banks, Treasury and Finance Minister Berat Albayrak said Friday, but added that the government vowed to stand by its financial institutions.

"We know very well what steps we need to take. In this process, no one should doubt the strong Turkish economy we desire with the right policies and practices," Albayrak said,

He said that the government recently kicked off a major transformation process. "We will see this change over the next five years together with our new economy approach that we build on economic equilibrium, sustainable and healthy growth and more equitable sharing."

In his speech, Albayrak said Turkish banks were in solidarity like never before, adding that they firmly proceed on their way with confident steps.

Speaking of fluctuations in the foreign exchange rate, Albayrak said that they would continue to take active steps to increase the strength of the Turkish lira. "We will further promote and encourage investors who trust the Turkish lira; 2019 will be a much better year in terms of Turkey's economic indicators in which much more powerful and stable policies and significant structural reforms and transformations will take place," Minister Albayrak said.

Albayrak said they are taking steps related to the course of a stronger fiscal discipline policy than ever before. "We have said that we will prioritize fighting inflation with effective fiscal policies. We will channel public resources into strategies aimed at technology management, current account deficit reduction and increasing exports within the framework of our new economy approach. We will maintain the savings process we have started in the public sector in a powerful and efficient way," he added. "We reported the savings figures and income-raising measures. A very good year-end balance sheet is waiting for us this year in the financial and budget disciplines contrary to what some say as signaled by the initial figures and savings. If we want to achieve success in fighting the current account deficit and inflation, which is the most basic struggle for our economy, in this period of global financial recession, we will not compromise on resource efficiency any longer."

Albayrak said that they back banks at the point of structuring their real sector debts and do not hesitate to take steps to develop much faster reflexes in the Banking Regulation and Supervision Agency (BDDK) and institutions.

He pointed out that they clearly stated that a strong production economy would be the biggest anchor for the greatest achievement and targets in this process, expressing in every environment that they support the real sector until the end.

Albayrak stressed that TOBB, which has taken a very important support mechanism initiative for the real sector with Breath Loan, as mentioned for the past two years, gave a strong shoulder to the ideal of winning with Small and Medium-Sized Enterprises (SME) Support Credit.

"We will create a new and strong credit usage infrastructure with 18-month maturity, including a six-month grace period, and with 1.85 percent interest per month up to TL 200,000 at the upper limit to our SMEs putting their chamber and exchange deposits in eight banks in question," Albayrak said, highlighting that tens of thousands of SMEs will benefit from this in a short period of time not exceeding 2 to 3 months.

Albayrak pointed out that the dollar, which has been transformed into a punishment tool in the world with political motives, has begun to lose its credibility day by day. "The same attitude and discourse apply in all our visits, abroad and especially in Europe. Now countries search for new and different ways in this regard to establish cooperation in customs and trade with each other and third countries against this situation. We will continue to take steps to protect and strengthen the Turkish lira against direct attacks," he noted.

Referring to one of the steps taken to increase national support to strength the lira, Albayrak announced that they are reorganizing the withholding rates of dollar and lira deposit accounts, indicating that in deposit accounts of up to six months, they apply a reduction of 1,000 base points in TL-based deposit interest with about 10 percent, 900 basis points in deposit accounts of up to one year with about nine percent and 1,000 base points in accounts longer than one year with again 10 percent. "We will apply the same reduction to participation banks and participation accounts," he added.