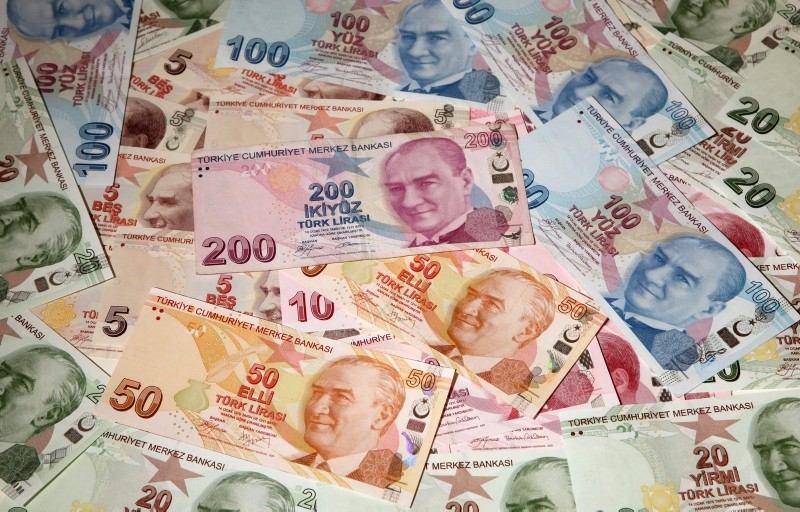 Turkish lira banknotes are seen in this picture illustration taken in Istanbul October 18, 2011. (REUTERS Photo)
by Daily Sabah with Reuters Sep 24, 2018 12:00 am

Turkey's lira firmed more than 3 percent on Monday after U.S. Secretary of State Mike Pompeo said he expected discussions with Turkish officials this week over the fate of a terror-linked U.S. pastor whose trial has strained relations.

Pompeo told reporters in New York he expected talks with Turkish officials to take place this week to discuss Brunson's fate. Erdoğan is visiting the United States this week for a United Nations meeting.

"Yes he could be released this month. He should have been released last month. And he should be released today in fact. We have talked to the Turks. They know the expectations," Pompeo told reporters in New York.

Speaking to reporters in New York, Turkish presidential spokesman Ibrahim Kalın said the decision on Brunson would be made by the judiciary and urged everyone to respect the court's ruling.

"Obviously we want to have good relations with every country, including the United States, but we have to resolve the issues between the two countries through diplomacy," Kalın said.

The trial of pastor Andrew Brunson has caused tension between Turkey and the U.S. as the latter aimed to pressure the country and interfere into the judicial process to release him.

Andrew Brunson, an evangelical pastor at the Evangelic Resurrection Church in the western city of Izmir for the past 20 years, was arrested in Turkey in September 2016 for alleged links to the PKK terrorist group and Gülenist Terror Group (FETÖ), who orchestrated an attempted coup on July 15, 2016. The pastor faces 35 years in jail on charges of espionage and committing crimes on behalf of FETÖ and the PKK.

"It's not just about Pastor Brunson, but a number of other issues, including the American support for the People's Protection Units (YPG) in Syria, which is a concern for our national security."

Turkey considers the YPG as the Syrian branch of the PKK, which is recognized as a terror group by the U.S., EU, and Turkey.

Ankara has long told Washington that the YPG is not different from the PKK and partnering with one terrorist group against another one is not acceptable. Washington, however, has continued to support the YPG, despite the U.S. listing the PKK as a terrorist organization.

The central bank this month hiked interest rates by 6.25 percent to stem inflation and put a floor under the currency. Last week the government rolled out a new economic program with lower growth estimates, although many investors have given it a lukewarm reception.

"If there is an attempt to improve relations with the U.S. then this would be the third important component that we need to expect this rebound in the lira to prove sustainable," said Piotr Matys, an emerging markets forex strategist at Rabobank.

"The other two important components are already in place. The central bank raised interest rate decisively and this was followed by the new economy program, which includes more realistic macroeconomic assumptions."