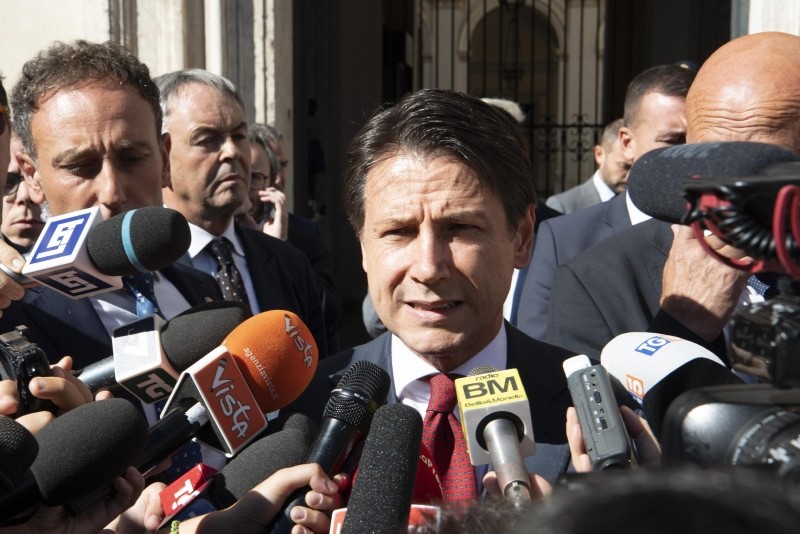 Italian Prime Minister Giuseppe Conte reaffirmed his country's commitment to the euro on Tuesday after a ruling coalition ally spooked financial markets by saying life would be better outside the single currency.

"Italy is a founding member of the European Union and of the Monetary Union and I want to reaffirm this: the euro is our currency and it is irrevocable for us," Conte wrote on Facebook.

"Any other statement presenting a different assessment should be considered an independent and arbitrary opinion that has nothing to do with the policies of the government I lead," he added.

Earlier, Claudio Borghi of the League party, told RAI state radio: "I am very convinced that with its own currency Italy would solve the majority of its problems. Not all of them, obviously."

Borghi chairs the budget committee of the lower house of parliament and is an economic advisor to Deputy Premier and Interior Minister Matteo Salvini, leader of the far-right, eurosceptic League.

Borghi later tweeted that he expressed personal views that were "not in the government contract" negotiated by the League and its coalition partner, the anti-establishment Five Star Movement (M5S).

His radio remarks were blamed for a new spike in Italy's spread, a key sovereign risk indicator which measures the yield differential between Italian and benchmark German 10-year bonds.

It briefly jumped above 300 basis points, the highest level since March 2014, from 282 late Monday. Meanwhile, the main index of the Milan stock exchange opened 1.5 percent down but later recovered.

He said: "We are well aware that Italians are very attached to the euro. They know that it protects them. Let's not feed some rumors over some thoughts that are really inappropriate."

Markets have been nervous about Italy since its government announced Thursday that it would increase the public deficit, ignoring EU budget discipline rules, to fund tax, pension and welfare giveaways.

The government raised deficit targets to 2.4 percent of gross domestic product (GDP) through 2021, below the eurozone's limit of 3 percent, but much higher than previously agreed 2 percent limit.

Deputy Prime Minister Luigi Di Maio said Tuesday that the government "will not back up one millimeter" from spending that will increase the country's deficit to 2.4 percent of annual GDP.

Moscovici said the plans represent "a very significant deviation from the commitment which had been taken."

That claim drew an angry response from Di Maio, who accused Moscovici of "creating terrorism with the markets."

Italy, the eurozone's third-largest economy, is under particular pressure to limit its deficit because its public debt stands at more than 130 percent of GDP, more than twice the permissible limit.

On Monday, the country was cautioned against its budget plans at a Eurogroup meeting of eurozone finance ministers, and also by European Commission President Jean-Claude Juncker.

Speaking in Germany, Juncker said Italy had to be treated "strictly and fairly" to prevent the emergence of a new crisis after the bloc had overcome the economic crisis in Greece.

Italian Economy Minister Giovanni Tria tried to reassure eurozone partners on Monday by saying that he expected the debt-to-GDP level to fall, despite the higher deficit, thanks to higher growth of 1.6 percent next year.

Meanwhile, Borghi told RAI that if the government really wanted a "fight with the European Union," paving the way for a euro exit, "we would have declared 3.1, not 2.4 [percent], for the deficit."

"This verbal toing and froing between Italy and Brussels are likely to keep investors a little cautious of piling back into Italian assets," said Michael Hewson of CMC Markets.

Italy's economy has been a laggard for years, with growth well below that of many other countries in the eurozone. Unemployment also remains relatively high at 9.7 percent.

Tria skipped Tuesday's wider meeting of the EU's 28 finance chiefs to return to Rome to work on the budget, which must be submitted to Brussels by mid-October.

In Luxembourg, European Commission Vice President Valdis Dombrovskis kept up the pressure on Italy on the sidelines of the finance ministers' meeting, noting that Italy has been a chief beneficiary of rules for more flexibility.

"Discussions about draft budget plan seem to be heading into a direction which goes substantially beyond this flexibility," Dombrovskis said.

"It is a fact that Italy has the second highest debt-to-GDP ratio in the EU, second after Greece and the highest debt servicing costs in the EU. It's important that Italy sticks with responsible fiscal and macroeconomic policy also to maintain interest rates at acceptably low levels," he said.

It remains unclear what action the EU might take. The EU had placed France in an "excessive deficit procedure" for almost a decade without fining it. And Germany has in the past broken the EU deficit limit, also without fines.

Piccoli said that Italy's deficit target "is generally not worth the paper it is printed on," noting that the planned deficit of 1.8 percent of GDP in the 2013-16 period actually ranged between 2.5 percent and 3 percent.

The higher spending in the new plan is aimed at satisfying election promises by the 5-Star Movement for a basic income for job seekers, while its partner in government, the League, pledged to reduce taxes. Both want to repeal an unpopular pension reform.

The government hasn't given details on how the increased spending would be paid for, but 5-Star leader Di Maio defended the budget targets, saying on RTL radio that he "hopes'" the plans would raise GDP by 2 percent in 2019, significantly above forecasts by Tria, who is not aligned to any party.