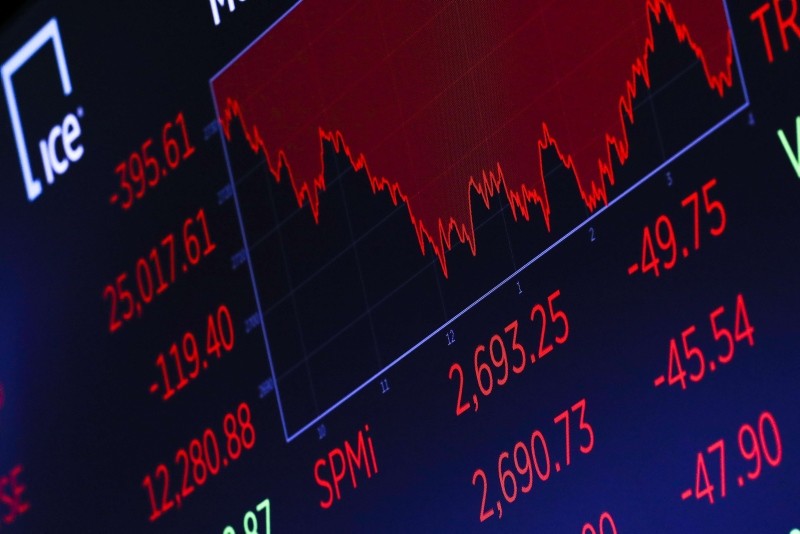 The day's final numbers are displayed on a monitor on the floor of the New York Stock Exchange (NYSE) at the closing bell, November 19, 2018 in New York City. (AP Photo)
by Nov 20, 2018 12:00 am
World equity markets fell on Tuesday, with U.S. stocks hurt by worries over softening demand for the iPhone and corporate growth prospects, while oil prices sank on concerns about rising global supply.

U.S. stocks continued their slide as shares of Apple Inc , which have tumbled nearly 20 percent from their record high, declined after Goldman Sachs trimmed its price target for the stock for the second time in just over a week.

As the outlook for corporate earnings growth dims, equities are bound to lose their footing, said Michael O'Rourke, chief market strategist at JonesTrading in Greenwich, Connecticut.

"It's been one of the positive catalysts that have pushed the market up for most of this year," O'Rourke said, referring to corporate earnings. "Now that's fading, so people are more apt to take profit and de-risk going into the year-end."

Oil prices lost ground as fears about slowing global demand and a surge in U.S. production outweighed expected supply cuts by the Organization of the Petroleum Exporting Countries (OPEC). U.S. crude prices have fallen 30 percent from a near four-year peak in early October. Brent crude prices have dropped 26 percent in the same period.

Meanwhile, the dollar index, tracking the U.S. unit against a basket of six major currencies, rose 0.4 percent as the greenback recovered after having been weighed by weak U.S. housing data. Other safe-haven currencies such as the yen and Swiss franc also gained.

Keeping with the flight to safe-haven assets, the benchmark 10-year U.S. Treasury yield also touched a seven-week low, though it later rose above that level.

MSCI's gauge of stocks across the globe shed 1.23 percent.

Stock markets around the world have suffered a shakeout in the past two months, pressured by worries of a peak in corporate earnings growth, rising borrowing costs, slowing global economic momentum and international trade tensions. Trillions of dollars were wiped off equities in a particularly torrid October.

Earlier, Italian government bond yields jumped to a one-month high and Italian banking stocks dropped to a two-year low, hurt by risk aversion and concerns over the Italian budget.