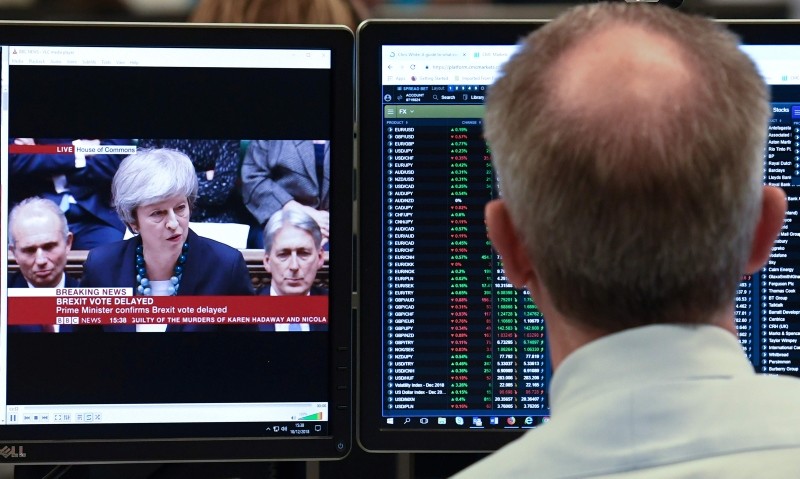 CMC Markets chief market analyst Michael Hewson looks at financial data at the offices of CMC Markets in the City of London on December 10, 2018. (AFP Photo)
by reuters
Dec 10, 2018 12:00 am

The British pound tumbled to its weakest since April 2017 on Monday after Prime Minister Theresa May pulled a parliamentary vote on her Brexit deal with the European Union, panicking investors about deepening political uncertainty in Britain.

May said on Monday she was delaying the planned vote as her deal would likely be rejected "by a significant margin". Colleagues had told May that she faced a rout in the vote, that was set for Tuesday.

The move thrusts Britain's exit from the European Union into turmoil, with possible options including a disorderly no-deal Brexit, another referendum on EU membership, or a last minute renegotiation of May's deal with Brussels.

May said she would do all she could to secure further assurances from the EU on the so-called backstop arrangement, a crucial part of the deal bitterly opposed by many of her fellow conservatives and opposition parties.

"Uncertainty is the only thing hitting the pound at the moment," said Kallum Pickering, an economist at Berenberg.

The pound fell 1.6 percent against the dollar to as low as $1.2507, most of the loss coming after May confirmed she was delaying the vote.

Against the euro, the pound dropped 1.5 percent to as weak as 90.875 pence, its lowest since August, before recovering some ground in late European trading.

Britain's exporter-heavy FTSE 100 index, which usually rises when sterling falls, succumbed to widespread selling pressure and fell 0.8 percent as investors fretted about the consequences of the political chaos for UK companies.

While the government considers when to next hold a parliamentary vote, it is stepping up contingency planning for a no-deal Brexit when it is due to leave on March 29.

The pound has fallen for four consecutive weeks, with traders struggling to comprehend the vote options and consequences of more political instability.

Earlier on Monday, the EU's top court ruled that Britain could unilaterally reverse its decision to leave, easing concerns about Britain crashing out of the bloc in March without a deal.

But analysts said sterling's weakness on Monday reflected concerns about May's future as prime minister and the worsening uncertainty.

"In our – admittedly low confidence – base case, stress in financial markets and pressure from businesses should lead to a last-minute approval of the deal in parliament," said Silvia Dall'Angelo, senior economist at Hermes Investment Management.

"However, the situation is fluid and other outcomes carry significant probabilities."

Some analysts saw a silver lining in May's decision to postpone the vote.

Pickering at Berenberg said the delay would end with the British parliament gaining a greater say on the withdrawal agreement and the sort of Brexit that the UK gets.

"This is ultimately a process towards softer Brexit so the pound is reacting more to the uncertainty because, from my point of view, this is mostly a positive development," he said.