Dow down 10 pct for December, nearing worst month in a decade 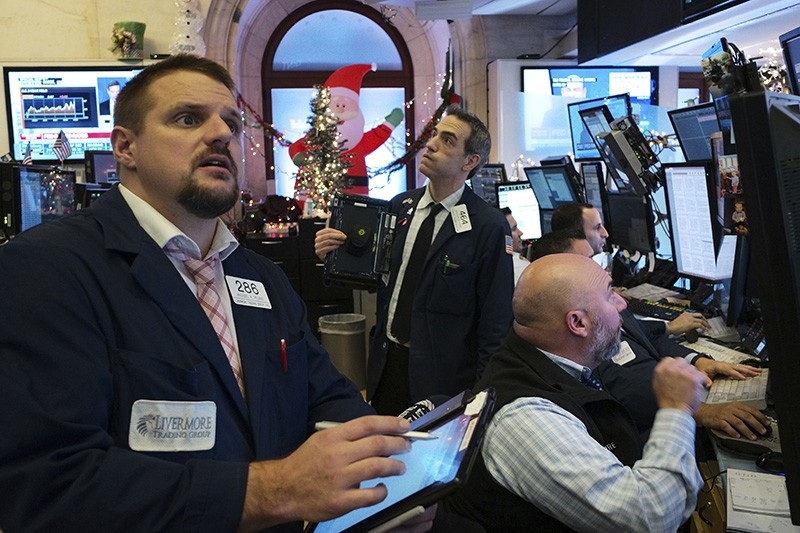 Traders with Livermore Securities at the New York Stock Exchange follow the news from the Federal Reserve Board of a rate increase, Wednesday, Dec. 19, 2018. (AP Photo/Mark Lennihan)
by Compiled from Wire Services Dec 20, 2018 12:00 am

The Dow Jones Industrial Average ended 2.0 percent lower at 22,859.60, a loss of 460 points. The index is now down more than 10 percent for December, putting it on track for its worst monthly loss in almost a decade.

The S&P 500 is currently down 7.7 percent for the year and the Nasdaq is on the verge of a "bear market," which is a drop of 20 percent from its peak this year.

The latest pullback came after Republican congressional leaders told reporters President Donald Trump would not sign a stopgap spending bill because it does not contain border wall funding.

The U.S. government only has funding to operate through Dec. 21, and without an agreement will have to shut down.

Trump's rejection sent lawmakers scrambling for a new compromise, although Democrats have stood firm saying they will not support a spending measure that funds Trump's wall on the U.S.-Mexico border.

The revived possibility of a shutdown worsened the downbeat mood on markets after the Federal Reserve announced another interest rate hike on Wednesday and made only subtle adjustments to the course of monetary policy tightening next year despite rising worries about global growth and a big pullback in the stock market.

"We have a trade war, the economy weakening, and now the possibility of a shutdown," said Peter Cardillo of Spartan Capital Securities. "All that is feeding by itself."