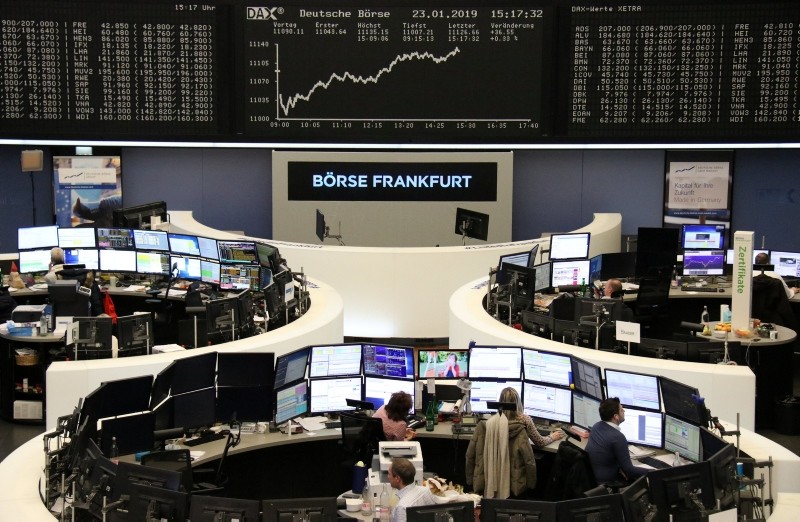 The pan-European STOXX 600 index was up 0.6 percent by 0842 GMT, on track for its fourth straight weekly gain.

Frankfurt's DAX was the top performer, while Britain's exporter-heavy FTSE 100 underperformed as a stronger sterling weighed.

The technology sector hit its highest level since Nov. 11 as investors drew comfort from better-than-expected earnings overnight from U.S. chipmakers. They shrugged off a profit and sales warning and fourth-quarter sales miss from Intel after the closing bell.

Those results helped soothe fears of stagnating smartphone demand and a cooling Chinese economy after sales warnings from Apple, Samsung and Taiwan Semiconductor earlier this month.

Car makers and parts suppliers, which are sensitive to trade frictions and the health of the Chinese economy, were the strongest performers, hitting Dec. 3 highs. Mining and oil stocks also gained.

Telecoms were the only sector in the red after disappointing results from Vodafone and Nordic telecom group Telia.

Vodafone was down 1.2 percent, hitting its lowest in nearly nine years after the world's second-largest mobile operator said revenue growth slowed in the third quarter due to ongoing price competition in Spain and Italy and a slowdown in South Africa.

The stock was knocked hard on Thursday after its South African unit issued disappointing results.

Telia was down 4 percent, at the bottom of the STOXX 600 after its weaker-than-expected results, while Ericsson rose 2.6 percent after the mobile telecoms equipment company beat fourth-quarter forecasts and highlighted thanks to growing demand for next-generation 5G gear.

The news will likely underscore expectations the Swedish company could be well placed to benefit from current turmoil surrounding market leader Huawei.

Fragrance and flavor maker Givaudan was not far behind, falling 3.5 percent after it said its weaker-than-expected net income in 2018 was hit by higher financing costs and foreign currency losses.