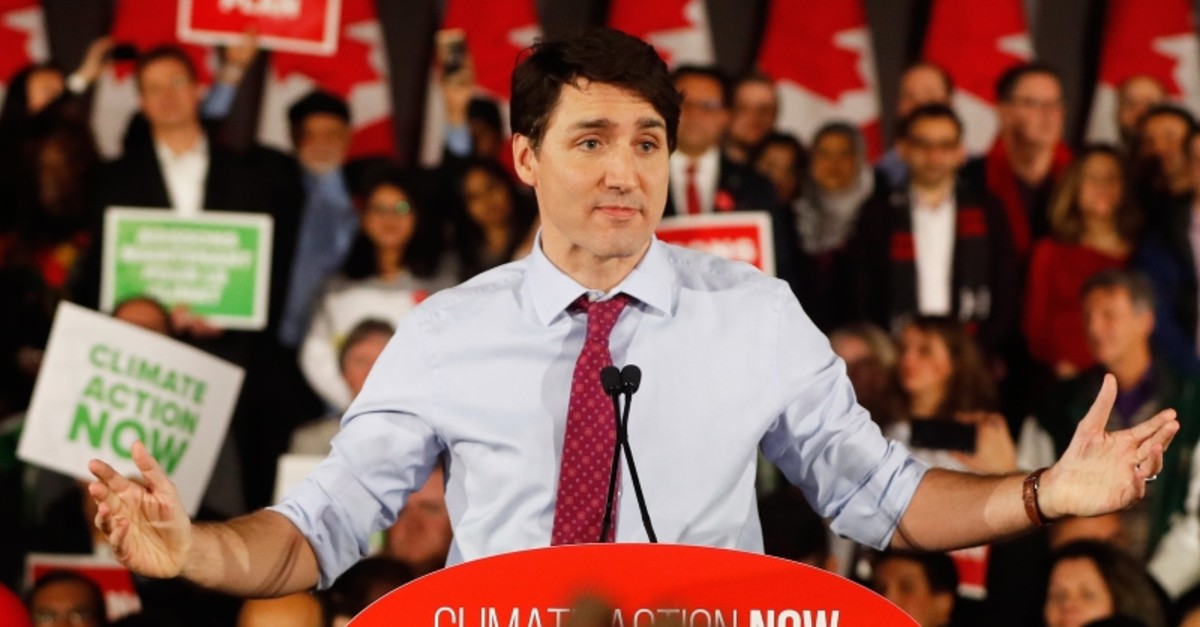 The Canadian dollar slumped to nearly six-week lows on Tuesday, hit by a combination of trade troubles, resignations from Prime Minister Justin Trudeau's cabinet and expectations the central bank could be on the cusp of changing its policy direction.

Global forex markets were overshadowed by the continued decline in volatility, lending a boost to higher-yielding currencies such as the U.S. dollar and emerging markets.

Focus has turned to meetings at the European Central Bank and the Bank of Canada, with both institutions facing the need to address stuttering economic growth and a slowdown in world trade.

The Canadian currency fell 0.3 percent to C$1.3350, extending Monday's losses on expectations that the central bank was approaching a policy turning-point.

The BoC is expected to hold rates this week at 1.75 percent but many reckon it is edging towards a cut later in 2019.

A month ago it was seen raising rates twice in 2019.

Charles St Arnaud, senior investment strategist at Lombard Odier, said the impact of rate rises on consumer spending had been underestimated. Question marks over oil exports and the trade slowdown were other concerns.

"The Bank of Canada are probably at the place where they are starting to feel concerned...I can see the Canadian dollar weakening a bit more as I think underperformance of the Canadian economy is not at an end," St Arnaud said.

Latest data showed Canadian growth slowed sharply to 0.4 percent on an annualized basis in the fourth quarter of 2018, versus the 1.2 percent forecast.

There were other concerns too, not least two cabinet minister resignations over the government's handling of a corruption scandal. That is roiling Trudeau's tenure months before an October election.

Treasury Board president Jane Philpott, considered a star minister, said in a resignation letter that it was "untenable" for her to continue in the Cabinet because she lost confidence and could not defend the government.

Philpott's friend, former Attorney General and Justice Minister Jody Wilson-Raybould, testified last week that Trudeau and senior members of his government inappropriately tried to pressure her to avoid prosecution of a major Canadian engineering company in a case involving allegations of corruption in Libya.

Wilson-Raybould resigned from Cabinet last month after being demoted to veteran affairs minister the month before.

The scandal has rocked Trudeau's government. Gerald Butts, his closet adviser and best friend, also resigned last month and is scheduled to testify Wednesday before a Parliament justice committee in Trudeau's defense.

"I know Philpott has felt this way for some time. And while I am disappointed, I understand her decision to step down. I want to thank her for her service," Trudeau said at a campaign-style event.

Trudeau said he takes the concerns very seriously and said the matter has generated an important discussion.

"But at the same time, we need to keep in mind the bigger picture," Trudeau said.

Trudeau has acknowledged raising the issue with Wilson-Raybould, but has said that was appropriate.

"I have concluded that I must resign as a member of Cabinet," Philpott wrote. "Sadly, I have lost confidence in how the government has dealt with this matter and in how it has responded to the issues raised."

Philpott, a physician, is a former minister of health and minister of indigenous services and was widely viewed as of one of Trudeau's most competent Cabinet ministers.

"The evidence of efforts by politicians and/or officials to pressure the former Attorney General to intervene in the criminal case involving SNC-Lavalin, and the evidence as to the content of those efforts have raised serious concerns for me," Philpott wrote.

"I must abide by my core values, my ethical responsibilities and constitutional obligations. There can be a cost to acting on one's principles, but there is a bigger cost to abandoning them."

Philpott said she would continue as a Parliament member for Trudeau's Liberal Party.

Wilson-Raybould said the same last week but declined to say she had confidence in Trudeau. Trudeau said earlier Monday he was still deciding whether Wilson-Raybould could remain a member of his party in Parliament.

Trudeau thanked Philpott for her service in a short statement that said he would have more to say later in Toronto.

The leader of the opposition Conservative Party, Andrew Scheer, said at a news conference that Philpott's resignation demonstrates "a government in total chaos" and called again for Trudeau to resign and for a police investigation of the affair.

Wilson-Raybould testified last week she was pressured to instruct the director of public prosecutions to negotiate a remediation agreement with SNC-Lavalin. The agreement would have allowed the company to pay reparations but avoid a criminal trial on charges of corruption and bribery. But Wilson-Raybould said the pressure was not illegal and said she was not instructed to interfere.

If convicted criminally, the Montreal-based company would be banned from receiving any federal government business for a decade. SNC-Lavalin is an economic force in Canada, with 9,000 employees in the country and about 50,000 worldwide.

"This is a spectacular blow to the government" said Nelson Wiseman, a political science professor at the University of Toronto. "It has become rare that ministers resign on principle in Canada. And now we've had two in such a short time. It reveals deep division in the Cabinet about how to deal with Jody Wilson-Raybould."

He said he thinks that most ministers and Liberal lawmakers want to kick her out of the party and that Philpott does not agree with them.

Wiseman said the last time he can recall something like this was in 1963 when three Cabinet ministers resigned over then Prime Minister John Diefenbaker's opposition to the stationing of American nuclear weapons on Canadian soil.

"This blow won't bring down the government, and Trudeau, like Diefenbaker, will survive and fight back," Wiseman told the Associated Press.

Robert Bothwell, a professor at the University of Toronto, said the resignations speak to Trudeau's failure to connect with his own troops.

"His failure to give a vigorous but reasoned response at the beginning of this pseudo-scandal allowed it to grow into Godzilla," Bothwell said.

Bothwell said Trudeau is not like his father, the late Prime Minister Pierre Trudeau, who swept to office in 1968 on a wave of support dubbed "Trudeaumania" and governed for most of the next two decades.

"Previous prime ministers benefited from experience and seniority, or respect, or fear, or just the feeling that they knew the way better than anybody else. Trudeau the father had all these attributes," Bothwell said.

Meanwhile ties with China are also under strain over trade and technology issues with recent arrest of Huawei executive Meng Wanzhou at the request of the United States.

Washington wants to put Meng on trial on fraud charges for allegedly violating Iran sanctions and lying about it to U.S. banks, and the case has become a major headache for Ottawa.

China's official news agency Xinhua has reported that Beijing suspects Kovrig of spying and stealing state secrets -- prompting Trudeau to say that he is "very concerned with the position that China has taken."

Elsewhere, the euro held near one-week lows versus the dollar at $1.1318 on expectations the ECB's Thursday meeting would hint at delaying hiking rates until next year and soon re-launch long-term bank loans to tackle economic slowdown.

"The ECB's new projections on Thursday might paint a more subdued picture than before," Commerzbank analyst Antje Praefcke said, adding the euro appeared to be "aiming for the $1.13 mark".

Investors are seeking out higher-yielding currencies as price volatility in the world's most-traded currencies has plummeted following a dovish shift by major central banks.

Implied one-month vol on the euro is close to the lowest since 2014 while Deutsche Bank's Currency Volatility Index is near record lows of 6.66 hit in January, 2018.