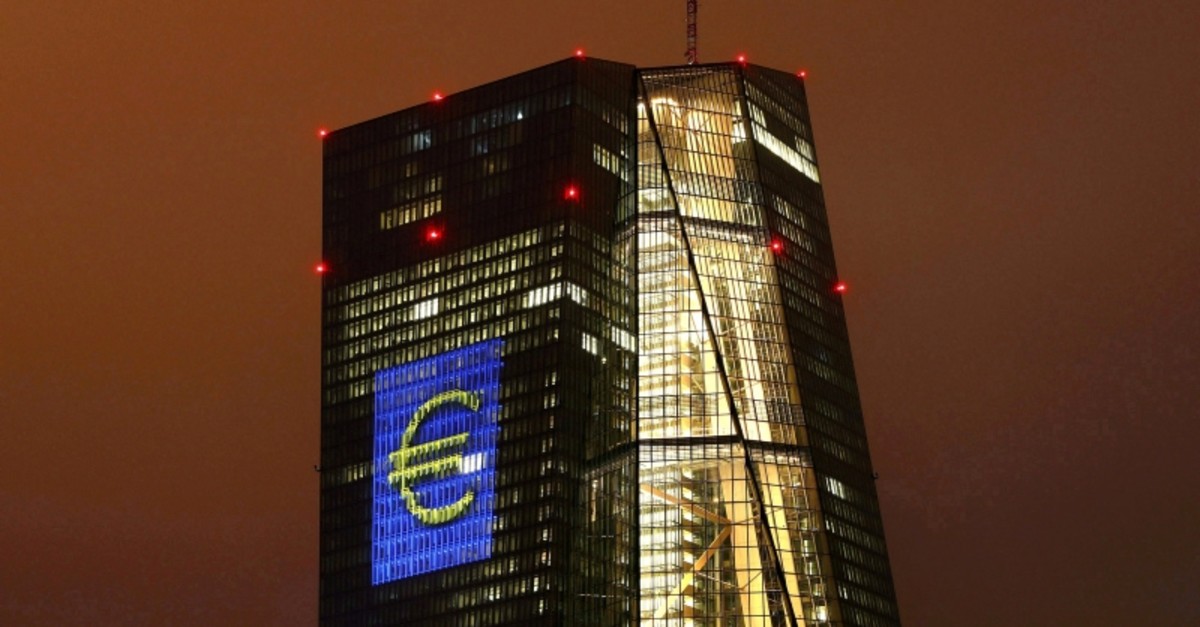 The headquarters of the European Central Bank (ECB) are illuminated with a giant euro sign at the start of the ,Luminale, light and building, event in Frankfurt, Germany, March 12, 2016. (Reuters Photo)
by Compiled from Wire Services Mar 07, 2019 12:00 am

The euro sank on Thursday to its lowest against the dollar since June 2017 after the European Central Bank postponed the timing of its first post-crisis rate hike to 2020 at the earliest and launched a new round of cheap loans to banks.

The ECB's decision to tweak its forward guidance on rates was a surprise for many investors. The central bank also cut its growth and inflation forecasts through 2021.

"The ECB has no choice," said Joseph Trevisani, senior analyst at FX Street in New York. "There are a lot of internal problems which are impediments to growth."

Anemic domestic demand and political tensions will unlikely be resolved by an easy ECB policy stance and would keep downward pressure on the euro, analysts said.

Unveiling the updated forecasts, ECB chief Mario Draghi said the bank now expects the eurozone's economy to expand by just 1.1 percent this year, down from the previous estimate of 1.7 percent.

"The persistence of uncertainties related to geopolitical factors, the threat of protectionism and vulnerabilities in emerging markets appears to be leaving marks on economic sentiment," Draghi told reporters in Frankfurt.

He also said inflation would slow to 1.2 percent this year, compared with the 1.6 percent previously forecast, pushing the ECB farther from its target of just under 2.0 percent.

Currencies of European countries not part of the euro zone, such as the Swedish crown and Hungarian forint, fell hard after the ECB's decision, which is aimed at battling deteriorating regional business and consumer activities, analysts said.

On the other hand, the greenback reached a new 2019 high against a basket of currencies that includes the euro as traders bet the United States would fare better than Europe in the coming months despite some soft patches in the U.S. economy.

The ICE index that tracks the dollar against a basket of six major currencies was up 0.63 percent at 97.483 after touching 97.499, which was its highest since Dec. 17.

"I don't think you will get much more on the upside," Aaron Hurd, senior portfolio manager in the currency group at SSGA in Boston, said of the greenback. "It will likely stay in a range."

Earlier Thursday, Asian markets stuttered with no fresh news on the China-US trade front and as investors turned their attention to further signs of weakness in the global economy.

Observers said a surge in the U.S. trade deficit could also spur President Donald Trump to ratchet up his protectionist agenda, even as he zeros in on an agreement with China.

The pound struggled as British and EU officials said talks to hammer out a deal that Prime Minister Theresa May could push through Britain's parliament had been "difficult," with a solution still elusive.

With just three weeks before the expected divorce day, the customs border in Northern Ireland remains a major sticking point and there continue to be worries that Britain will crash out of the EU without an agreement in place, which could batter the economy.

However, traders take some comfort in the fact that if MPs reject whatever deal is presented to them in a vote next week, they will vote in the following days on whether to leave with no deal or delay Brexit.