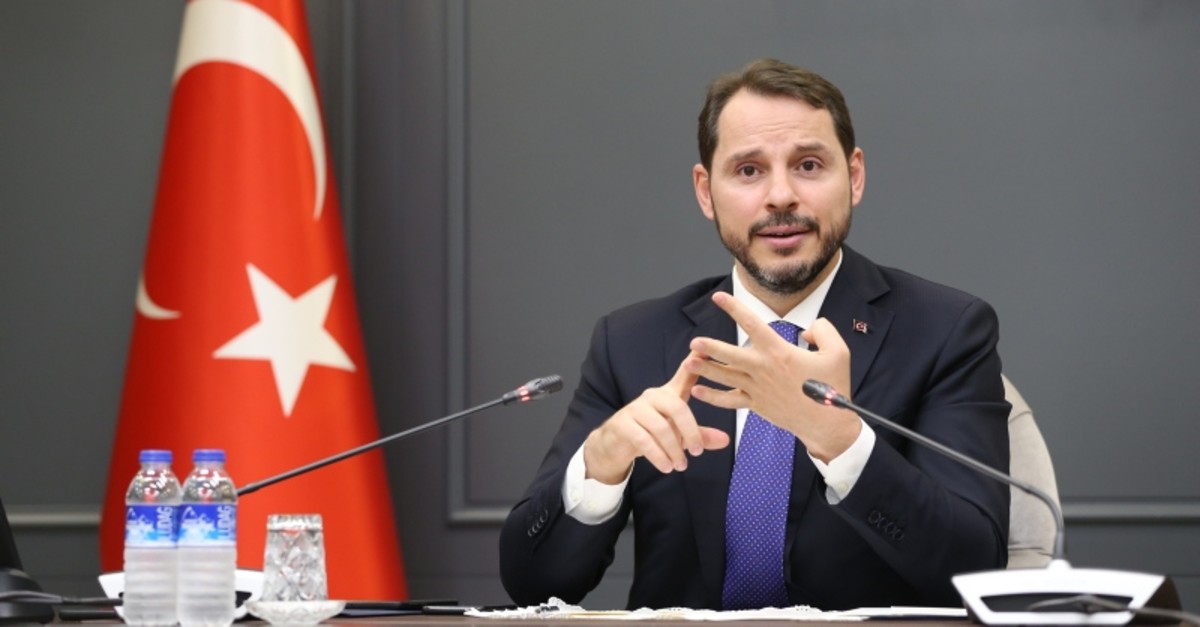 In addition to a gradual decline in consumer prices in the recent period, Turkey has entered a course to decrease interest rates and public and private banks will soon lower rates for loans, Treasury and Finance Minister Berat Albayrak said Tuesday.

"The central bank took steps on interest rates according to the evaluations based on similar examples, economic activity and the improvement in inflation," Albayrak said, adding that he views any improvement and easing in the interest rates positively due to the cost cuts of the real sector.

The minister's comments during a press conference in Ankara came after the Central Bank of the Republic of Turkey (CBRT) significantly cut its benchmark policy rate, the one-week repo rate, by 425 basis points from 24% to 19.75% on Thursday. Although the bold rate cut, the biggest since 2002 and the first in 4.5 years, was significantly above market expectations, markets responded positively and the Turkish lira stood firm against foreign currencies.

The minister said they see that the downward trend process in the interest rates would continue more clearly in the upcoming period. Albayrak noted that an interest rate cut will probably be followed by a decline in loan rates, led especially by state-run lenders.

Before its meeting last week, the CBRT had not made a change in its interest rates since it made an aggressive rate hike last September following speculative fluctuations that erupted last August.

Predictions pointed to the bank cutting the rate, an estimate strengthened by the backward trend in inflationary expectations and the sharp decline in Turkey's risk premium as well as prospective rate cut policy of the central banks of developed countries.

"At the coherency point, we as policymakers and the technical pillar of the matter, are coordinating with both budget and tax policies. Taking into account the inflation target of 15.9% in the New Economic Program (NEP) we put forth for 2019, I can say very clearly that we will close this year with inflation below the target," Albayrak said.

Earlier, having followed months of decline and as a result of the ongoing stabilization process in the economy, the annual inflation in Turkey in June fell to the lowest rate of inflation since June of last year, when it was 15.39%.

Annual inflation increased by 15.72% year-on-year last month, a sharp decline compared to 18.71% in May, according to the Turkish Statistical Institute (TurkStat). The sharp drop in June inflation was driven by a high base effect and a drop in food prices.

Government officials and economists project that inflation may fall to single digits in the September-October period due to the base effect. Consumer prices in June increased only 0.03% month-on-month, according to TurkStat, while economists expected an increase of 0.08%. The 12-month average hike in consumer prices was 19.88% in June.

Following its rate decision last week, the CBRT said recent revisions suggest that Turkey's inflation is likely to materialize slightly below the projections of the April Inflation Report by the end of the year.

"Even though we see a slight increase based on the base effect in July, the process ahead shows that given the strong base effect in August, September and October, this trend is even lower," Albayrak noted.

"With the serious loosening of interest rates in Turkey in the recent period and based on the fact that the interest rate trend will come down more clearly and strongly in the coming period, we have entered a period of interest rate cuts," Albayrak said.

He said the Turkish economy was forecast to further stabilize with inflation continually decreasing in 2020, while 2021 and beyond would be a time of economic independence for Turkey.

Stressing that the immune system and reflexes of the economy are stronger compared to last year, the minister emphasized that Turkey has left the worst behind and entered an upward trajectory, and that the economy would enter a more positive period by the second half of the year. Albayrak said the year-end growth of the country will be positive and probably close to the government's target of 2.3%.

Albayrak further noted Turkey will likely run a budget deficit below 3% of the GDP with the increase in revenue in the second half of the year.

Turkey's central government budget balance posted a deficit of TL 78.6 billion in the first half of the current year. The country's budget revenues totaled TL 403 billion in the first six months of this year, up 14% year-on-year, data showed. Budget expenditures rose 20.5% to nearly TL 481.6 billion – marking a TL 78.6 billion deficit. Official figures showed that tax revenues rose 4.4% to TL 307.7 billion, while interest payments were TL 50.7 billion over the same period.

Last month, Turkey's budget revenues totaled TL 55.5 billion, up 7.6% on a yearly basis, according to official data. Budget expenditures in June were TL 67.5 billion, a decrease of around 12.5% annually.

Touching on Turkey's oil and gas exploration activities, Albayrak said Ankara is taking crucial steps in the eastern Mediterranean, adding that Turkey has the highest energy consumption in its region.

The minister also said the government is focused on tax reform and is trying to put together a package for this fall. "We're researching a competitive taxation system against global examples and developing countries," he added.

About the possible U.S. sanctions on Turkey over its purchase of the Russian S-400 missile systems, Albayrak said he expected any possible sanctions to have a minimal effect, as bilateral ties between the two countries seemed to improve following U.S. President Donald Trump's remarks saying Ankara was treated unfairly.

The U.S. said it would impose sanctions on Turkey under the Countering America's Adversaries Through Sanctions Act (CAATSA), which aims to prevent countries from purchasing military equipment from Russia, but President Trump was reportedly reluctant to impose any sanctions on Ankara as he has a close relationship with President Recep Tayyip Erdoğan and considers the treatment Ankara received as unfair.