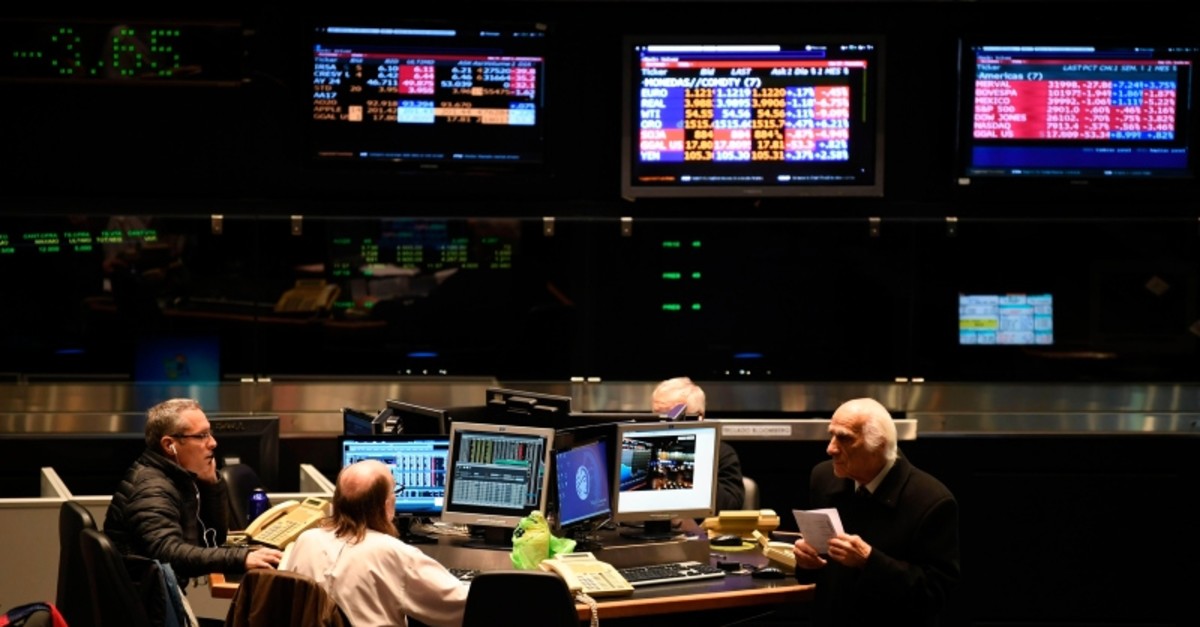 Markets panicked as the peso closed at 57.30 to the dollar, a drop of 18.76 percent from its Friday closing figure, while the Merval index crashed 38 percent by close.

On the New York stock exchange, Argentine bonds lost around 20 percent and shares in companies from the recession-hit South American country hemorrhaged more than 50 percent.

"This is just a taste of what's going to happen" if the Peronist Fernandez, whose running mate is corruption-tainted former president Cristina Kirchner, comes to office, Macri warned.

"This is about the past, there's a ton of people who don't keep their money in this country, who are leaving this country. It's incredible what could happen."

Ever since taking office, Macri has blamed Argentina's economic woes on the polices enacted by three successive Kirchner governments -- Cristina Kirchner's 2007-15 time in office was preceded by a single term for her late husband Nestor.

"We cannot go back to the past because the world sees this as the end of Argentina," said Macri.

"The Kirchnerist alternative has no credibility in the world."

Macri called a meeting with Central Bank president Guido Sandleris before the markets opened on Monday, while putting back his morning cabinet meeting to 3:30 pm (1830 GMT.)

The Central Bank bought $50 million in pesos to try to halt the slide, but to no avail.

On Sunday, center-right Macri was dealt a huge blow in his bid for re-election in October when he polled 15 points less than center-left Peronist candidate Fernandez.

"The president cannot have peace of mind. The markets are giving warning that the government has put itself in a position it cannot respond to," Fernandez told Radio 10 on Monday.

Argentina is currently in a recession and posted 22 percent inflation for the first half of the year -- one of the highest rates in the world.

Backed by the International Monetary Fund, Macri has initiated an austerity plan that is deeply unpopular among ordinary Argentines, who have seen their spending power diminished dramatically.

The peso lost half its value against the dollar last year.

But the Buenos Aires stock exchange shot up eight percent on Friday amid expectation that Macri would do well in Sunday's vote.

Those hopes were quickly quashed as it lost 10 percent when operations opened on Monday, before plunging further during the first two hours of trading.

The worst hit shares lost 46 percent of their value.

Macri now faces a daunting task of trying to overturn a huge deficit in just two and a half months.

"The vote shows a profound dissatisfaction with the economic situation (and) the worry within society that the government is disconnected from reality and wasn't up to tackling the problems," political analyst Carlos Fara told AFP.

Macri managed only 32 percent in the party primaries that effectively acted as a nationwide pre-election opinion poll as all of the South American country's major parties had already chosen their presidential candidates.

"We've had a bad election and that forces us to redouble our efforts from tomorrow," said Macri, whose popularity has plunged since last year's currency crisis and the much-criticized $56 billion IMF bail-out loan he secured.

"It hurts that we haven't had the support we'd hoped for," admitted Macri.

Fernandez scored 47 percent and if he repeats that result in the October 27 general election first round, he would win outright without need for a November 24 run-off.

Argentina's electoral law requires a candidate to gain 45 percent for outright victory, or 40 percent and a lead of at least 10 points over the nearest challenger.

"We're going to begin a new stage. We always fix the problems that others create," said Fernandez to thousands of cheering supporters in Buenos Aires on Sunday night.

Analyst Rosendo Fraga said Macri and Fernandez need to come to a bipartisan "governability agreement," otherwise "it's going to be very difficult to build confidence" in the markets between now and October's vote.