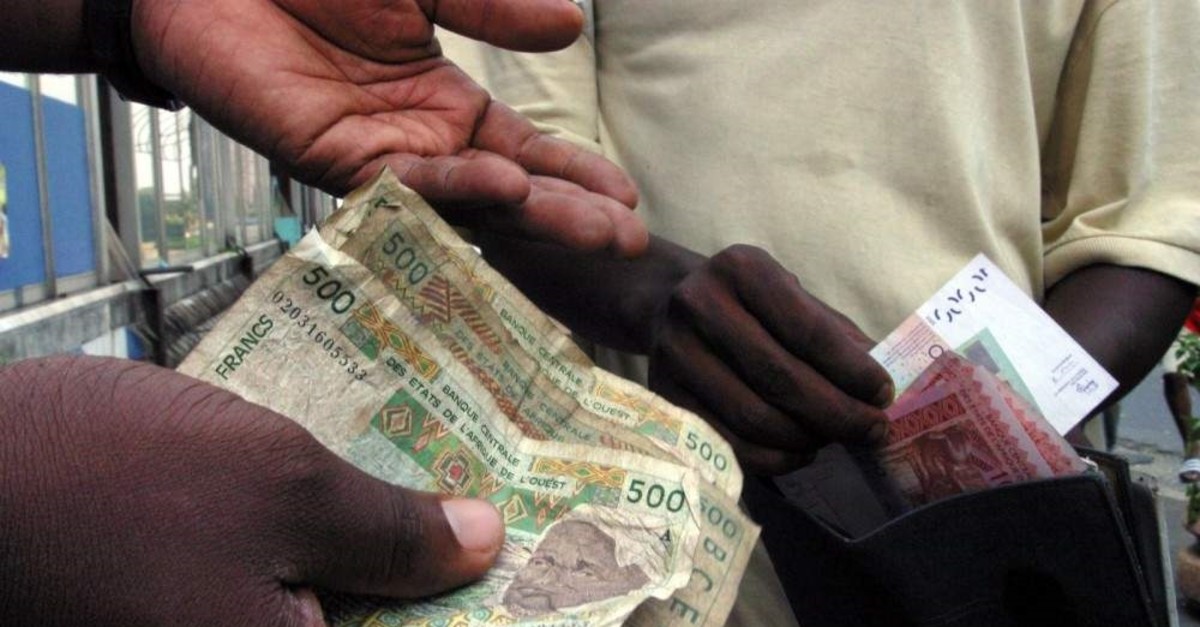 Eight West African countries that gained independence decades ago have continued to vest their foreign exchange reserves with the French central bank and have now decided to move their reserves to Senegal. (REUTERS Photo)
by Anadolu Agency Nov 15, 2019 5:29 pm
A proposal by eight West African nations to withdraw their currency reserves from the French central bank has evoked a spate of reactions.
While it has been largely hailed in the African continent, experts fear the move, having implications on the French economy, is fraught with political ramifications.
The move also comes with the decision to replace the CFA franc, the euro-linked currency used in 14 West and Central African countries, with a new common West African currency, named the eco.
Even though these eight West African countries which include, Benin, Togo, Burkina Faso, Mali, Senegal, Ivory Coast, Niger and Guinea Bissau had gained independence years ago, they continued to vest their foreign exchange reserves with the French central bank. They have now decided to move their reserves to Senegal.
"We all agree on this, unanimously, to end this model," Benin's President Patrice Talon told French media on Thursday.
He claimed that Paris has also agreed to release their reserves, which will now be vested with the Senegal-based Central Bank of West African States.
The CFA, which was specially created in 1945 for the French colonies of Africa, is linked to the euro and its convertibility is guaranteed by France. According to the arrangement, described by analysts as a colonial relic, these African countries, had to deposit half of their foreign currency reserves, in the French central bank.
Uganda-based analyst Fred Muhumuza said the arrangement was linked to colonial ties with France. Muhumuza, who teaches economics at the Makerere University – one of the largest and oldest institutions of higher education – said that depositing currency in developed countries was aimed to insulate it from political instabilities back home.
"They [developing countries] also keep their reserves in the central banks of developed countries, to get good returns," he said. Many countries prefer to keep their reserves with the Federal Reserve System or the central banking system of the U.S., as international trade mostly uses the U.S. dollar as exchange.
"It is also true, that these reserves act as a good resource for developed countries and not for their real owners," Muhumuza said as quoted by Anadolu Agency (AA) on Friday.
Move to hit French economy
He, however, said the move was fraught with political implications, as it will hit the French economy. "Loss of a pool of resources and control of the economies of these countries will have cascading effects on France, which may not take the move lightly. It will be difficult to transfer reserves. There were similar proposals before. They never materialized," said the expert, adding that he was keeping his fingers crossed.
President Talon agreed that the decision may take time, but it has been adopted at the meeting of the Economic Community of West African States (ECOWAS).
In July, the leaders of the region also adopted a proposal to introduce a single currency – the eco, for the entire region by 2020.
In the first phase, countries with their own currencies, Gambia, Ghana, Guinea, Nigeria and Sierra Leone, will launch the eco. In the second phase the eight West African Economic and Monetary Union (UEMOA) member countries that have in common the CFA franc, the Ivory Coast, Senegal, Burkina Faso, Mali, Togo, Niger, Benin and Guinea-Bissau, will be covered by the eco.
The introduction of the eco was initially planned in 2003, but was repeatedly delayed due to various factors. Chadian President Idris Debby said the move will clear injustice heaped on the African countries for too long. "The injustice has gone for too long. It is time to discuss issues with France to clarify many things, to allow us to have our monetary sovereignty. We do not have it today," he told a media briefing on Monday.
The West African Economic and Monetary Union consist of Benin, Burkina Faso, Ivory Coast, Guinea-Bissau, Mali, Niger, Senegal and Togo from West Africa. The Central African Economic and Monetary Union consists of Cameroon, Central African Republic, Chad, Republic of the Congo, Equatorial Guinea and Gabon.
"The success of the monetary union will depend on the dispositions of member states especially the Francophone countries who still rely on France for many things," Bashiru Animashaun, an expert on ECOWAS, told AA.
Last Update: Dec 20, 2019 1:43 am
RELATED TOPICS