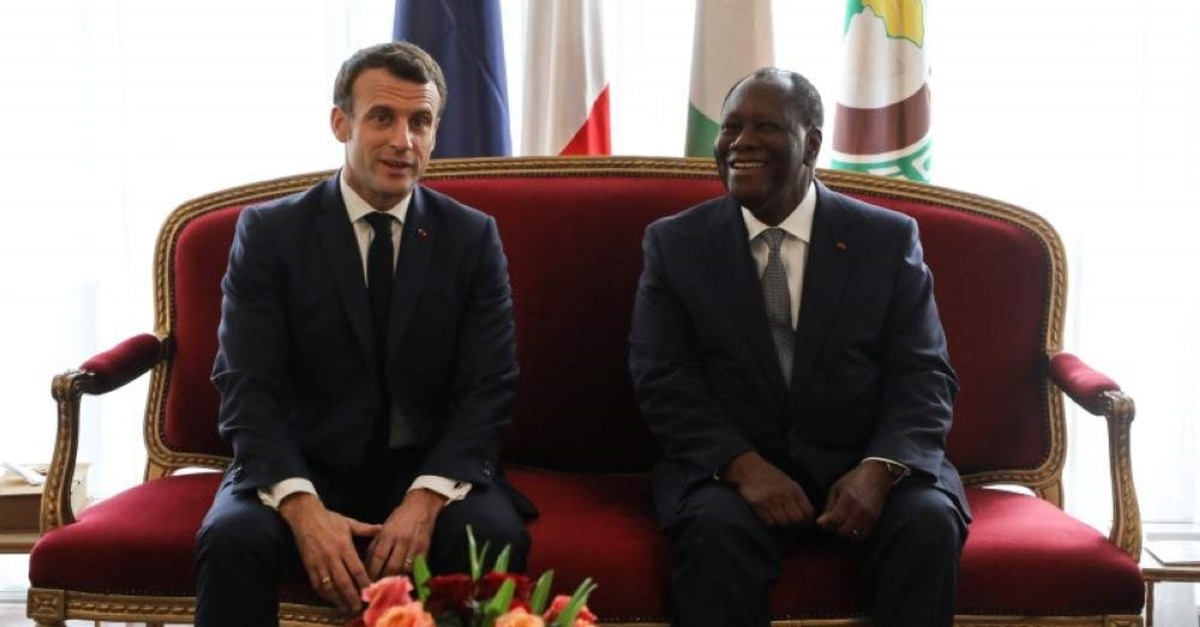 French President Emmanuel Macron meets with his Ivorian counterpart President Alassane Ouattara at the Presidential Palace in Abidjan on Dec. 21, 2019. (AFP)
by Dec 22, 2019 12:03 am
Eight West African countries Saturday agreed to change the name of their common currency to Eco and severed the CFA franc's links to former colonial ruler France.

The CFA franc was initially pegged to the French franc and has been linked to the euro for about two decades.

Benin, Burkina Faso, Guinea-Bissau, Ivory Coast, Mali, Niger, Senegal and Togo currently use the currency. All the countries are former French colonies with the exception of Guinea-Bissau.

The announcement was made Saturday during a visit by French President Emmanuel Macron to Ivory Coast, the world's top cocoa producer and France's former main colony in West Africa.

These included "a change of name" of the currency, he said, adding that the others would be "stopping holding 50% of the reserves in the French Treasury" and the "withdrawal of French governance" in any aspect related to the currency.

The deal took six months to hammer out, a French source said.

The CFA franc's value was moored to the euro after its introduction two decades ago, at a fixed rate of 655.96 CFA francs to one euro.

The Bank of France holds half of the currency's total reserves, but France does not make money on its deposits stewardship, annually paying a ceiling interest rate of 0.75% to member states.

CFA notes and coins are printed and minted at a Bank of France facility in the southern town of Chamalieres.

The CFA franc, created in 1945, was seen by many as a sign of French interference in its former African colonies even after the countries became independent.

The Economic Community of West African States regional bloc, known as ECOWAS, earlier Saturday urged members to push on with efforts to establish a common currency, optimistically slated to launch next year.

The bloc insists it is aiming to have the Eco in place in 2020, but almost none of the 15 countries in the group currently meet criteria to join.

The key demands for entry are to have a deficit of less than 3% of gross domestic product, inflation of 10% or under and debts worth less than 70% of GDP.

Economists say they understand the thinking behind the currency plan but believe it is unrealistic and could even be dangerous for the region's economies which are dominated by one single country, Nigeria, which accounts for two-thirds of the region's economic output.

Eight of them currently use the CFA franc, moored to the single European currency and gathered in an organization called the West African Monetary Union, or WAMU.

But the seven other ECOWAS countries have their own currencies, none of them freely convertible.
RELATED TOPICS