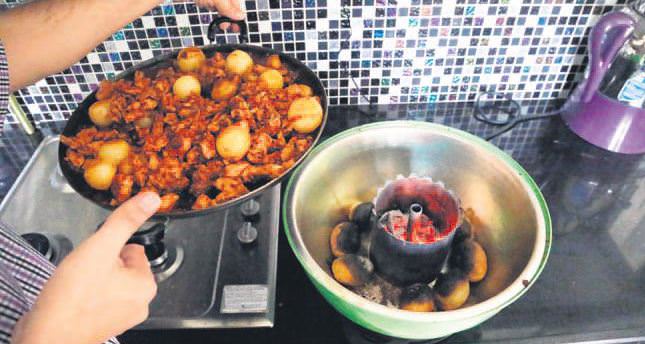 by AA
Sep 01, 2014 12:00 am
An Isparta-based solid fuel boiler producer introduced a barbecue heated with coal that does not emit any smoke. Owner Cengiz Zeybek said that they came up with the innovative idea due to high natural gas consumption that reduced their sales. Previously, the company obtained the patent rights of other products such as boilers that do not need any cleaning or chimneys without releasing fumes. Zeybek complained about the recent decrease in sales with the rise of natural gas. "We have enough experience in producing solid fuel boilers and decided to introduce a new product that can be safely heated with coal," Zeybek said. Following two years of intensive work, the company successfully created a home-use barbecue that does not release any smoke. The underlying reason behind the innovation is not about coal, but heating technology.

The barbecue has a special heating system that burns smoke with high combustion efficiency. The patent office conducted the necessary work and did not see any other similar product. "We are working with an established patent office with 120 engineers. The product was not invented anywhere before. Many other products do not release smoke, but are powered with electricity. We obtained the product's patent from 148 countries," he continued. The product has an easy working system. "Put 300 grams of coal in the reservoir then spread the special ignition gel and fire it up. Put meat on the barbecue after two minutes," Zeyrek said.

It is necessary to burn 1.5 kilograms of coal or wood to cook 1.7 kilograms of meat on standard barbecues. "You need to use pine cones or firewood to fire a barbecue. It is impossible to make them at home. Our product allows you to cook 1.7 kilograms of meat with 300 grams of coal," he said. The new innovation is also easy to clean and can even be put in a dishwasher. The product does not have any carcinogenic effects since meat is not touched by fire. Users can cook meat without using water or oil on barbecue.