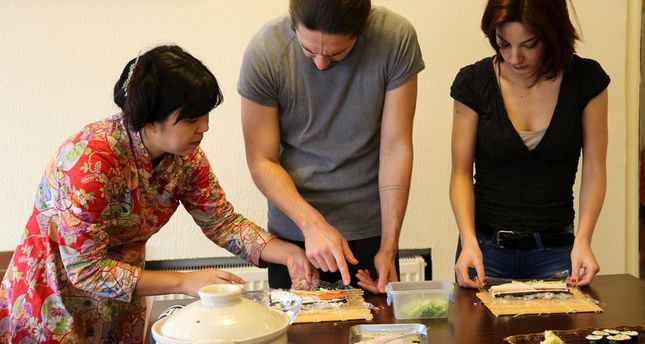 by AA Dec 28, 2014 12:00 am
Japanese businesswoman Rie Sakamoto, who opened a restaurant in Antalya focusing on Japanese and Far East cuisines, serves sushi with Hamsi, anchovies that come mostly from the Black Sea, upon costumer request. Sakamoto who first came to Turkey 10 years ago on a holiday and settled down in Antalya four years ago, put her culinary education into practice in Antalya. The businesswoman serves examples from Japanese and Far East cuisines in her restaurant in Işıklar Avenue.

Sakamoto told an Anadolu Agency (AA) correspondent that her aim is to promote Japanese culture, not making money. She said that she decided to open a restaurant as her friends in Antalya were very curious about the traditional Japanese foods, especially sushi. She added that sushi which is made from raw fish meat is highly in-demand.

She noted that Russian and German citizens living in Antalya come to her restaurant to eat sushi regularly; however, Turkish people hesitate to try the well-known Japanese food as they are not accustomed to eat raw fish meat.

Sakamoto who told that Turkish people sometimes approach her with strange requests stated that, "They want to add or take out some ingredients in the meals. I made sushi with Hamsi upon their wishes." She said that Turkish people love to eat fried Hamsi with bread and she serves the fish with rice instead of bread.

Saying that she also gives sushi workshops for those who want to learn how to make sushi, the Japanese businesswoman continued, "Especially, young people show interest in the workshops. After the workshop, people are able to make sushi at home."

Civil engineer Altuğ Akarpa, who attends the sushi workshops, said that he enjoys the course as he is very interested in Far Eastern Cuisine. Tuğçe Arslan who on the other hand said although she did not like sushi when she first tried it, she became addicted to it once she got used to it. "It takes too much time to prepare sushi. You can only make a single serving in three hours and eat all of them in three minutes," she concluded.