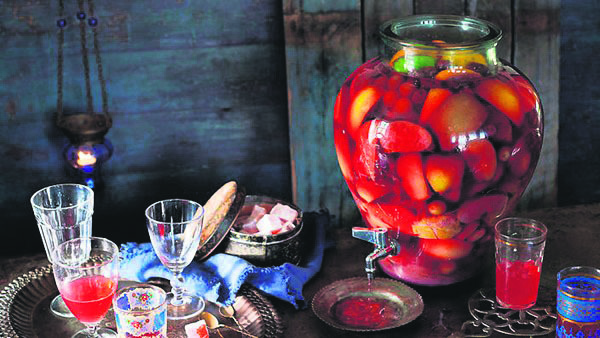 Turkey's regional cooking traditions are unveiled in "Anatolia: Adventures in Turkish Cooking," a masterfully-written book by a Turkish chef and travel journalist based in Australia

Culinary treats of classic Turkish food culture is combined with expert's insight in the recently published "Anatolia: Adventures in Turkish Cooking," a big and beautifully illustrated book written by Sydney-based Turkish chef Somer Sivrioğlu and Australian journalist and food scholar David Dale. Sourced from the grand banquets of the Ottoman Empire to the spicy snacks of Istanbul's street stalls and seafood of the Aegean coast to majestic breakfasts of southeastern Anatolia, the culinary book is an awe-inspiring cultural tour of Turkey with 150 recipes and exclusive photographs. This multidimensional book is a curious quest into the world of Turkey's regional cooking culture. "The idea came up when we were flying east from Istanbul and I was studying a map of our destination - the town of Gaziantep near the Syrian border," said Dale in the book. He asked Sivrioğlu whether he would be interested in doing a book that would challenge old theories about Turkish cooking and would give readers a way to recreate classical dishes at home and also help them understand what they are eating when they visit Turkey. "Our plan was to meet the makers of the dishes that intrigue the Turks," said Dale in his blog article on the Sydney Morning Herald. The two food experts inspire readers while they are talking about how rituals, myths, jokes and folk wisdom has influenced centuries-old Anatolian cooking.

Readers will find some feature spreads on local Turkish chefs and producers, making Anatolia more than an ordinary cookbook. A special chapter explores the history of Turkish food and techniques. A special map describes the unique foods of Turkey's regions. In doing so, readers will know what to eat when they are touring around Turkey. The map suggest baklava, kebabs and bulghur wheat in the southeastern Anatolian region; fruit molasses and pastries (börek) in central Anatolia; seafood in the Aegean and Mediterranean regions and grains and lamp in eastern Anatolia. Divided into different chapters - Breakfast, Lunch, Afternoon Tea, Meze and Dinner - the recipes cover contemporary and traditional Turkish food including minted yogurt balls, stuffed melon with chicken, beef goulash and thin-crust pide bread with spicy lamb topping. The initial chapters provide comprehensive descriptions and historical information on the evolution of food culture across the country. Readers are advised to check the 15 most favorite ingredients and best places to eat and stay during their Turkey visit.

Published by Murdoch Books, Anatolia deserves to be called a travel diary as the book takes readers to the different places of modern Turkey, showing its vivid lifestyle with visually stunning photographs like those showing a cafe serving traditional food, a street market in Istanbul's Kadıköy district and a Turkish woman making "gözleme," a kind of fried pastry with assorted fillings to taste, made popular by Yuruks. Australia-based photographer Bree Hutchins, who journeys around world's hidden kitchens, takes readers to different cities of Turkey from Edirne in the northwest to İzmir in the west and Muğla in the southwest to Şanlıurfa in the southeast. Running a famous restaurant in Balmain, Sivrioğlu was raised in Istanbul and moved to Sydney at the age of 25. Working as commentator on popular culture and food, Dale has written other books such as "Soffritto: A Return to Italy," "The Art of Pasta" and "The Obsessive Traveler." Anatolia is available at major bookstores including Beyoğlu Pandora in Istanbul or can be ordered online.
Last Update: Jun 08, 2015 8:00 pm
RELATED TOPICS