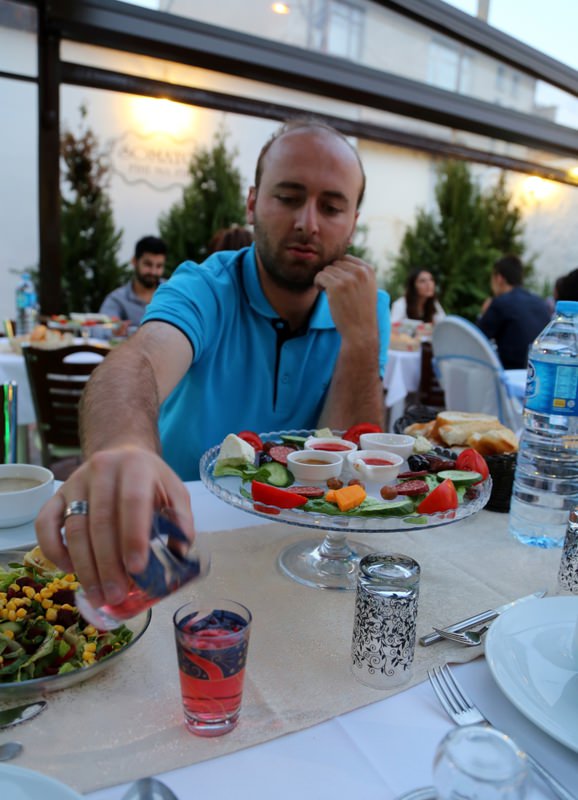 by Anadolu Agency Jul 02, 2015 12:00 am
The Konya-based restaurant, which serves exquisite examples of Seljuk cuisine as well as 13th-century Mawlavi cuisine, is very popular during Ramadan. The restaurant opens its doors to those who want to try new flavors and works hard to continue the Mawlavi tradition by introducing the kitchen tradition of the period to its guests.

The guests of the restaurant break fast with rose sherbet, authentic to Ottoman and Seljuk courts. Following sherbet, the guests are served "tutmaç," "Fihi Ma Fih" and roasted pepper soups, which are mentioned in Mevlana's works "Fihi Ma Fih" and "Masnavi." The soup is followed by main dishes that are cooked without tomato, tomato paste, pepper, potato or olive oil, as these items were not available in the 13th-century. The meal service is finished with three different desserts.

Speaking to an Anadolu Agency (AA) reporter on the 13th-century Mawlavi cuisine, investigative writer Nevin Halıcı said Mawlavi cuisine is one of the three most famous cuisines in the world.

She said Mawlavi cuisine is the most significant founding branch of Sufi cuisine and continued, "Mawlavi cuisine was shaped within Turkish cuisine. Many rules that were set by Mawlavi cuisine helped Turkish cuisine to reach where it is today. The 13th-century Mawlavi cuisine bears traces of the Seljuk era. The dishes are cooked with the ingredients that people used during that period." She explained that olive oil, potato and tomatoes were not used back in the day. "The products that grew in Konya in the 13th century shaped Seljuk cuisine," concluded Halıcı.On the other hand, the manager of the restaurant Ulaş Tekerkaya said they wanted to revive the old cuisine culture of Anatolia and decided to open a restaurant that serves desserts and dishes of the 13th-century.

Tekerkaya said they host both local and international guests in their restaurant and went on, "We are welcoming more people in Ramadan around the time of iftar. Those who want to break fast with examples of Seljuk and Mawlavi cuisines are interested in our restaurant." The restaurant takes reservations days in advance, and all the tables are full after 3:00 p.m. The service begins with rose sherbet, which has a refreshing flavor. The guests are first served "tutmaç," or roasted pepper soups. Following the soup, the service continues with stuffed chic hen with peanuts and apricots, cracked wheat cooked with turmeric, rich sauced beef or lamb's shank thick with vegetables. For dessert, the guests can make a choice between "sac arası," almond halva and stuffed fig. "Our guests usually say that our dishes are very light," Tekerkaya said. As Tekerkaya is interested in spice culture, he prefers to use spices that prevent puffiness. "At the bottom of our menu, it is written that 'none of the dishes in this menu causes puffiness.' Our menu is prepared according to the needs of people suffering from coeliac disease, protein deficiency and high blood pressure as well as vegetarians. These are the dishes that everybody can taste," Tekerkaya concluded.
Last Update: Jul 02, 2015 9:56 pm
RELATED TOPICS