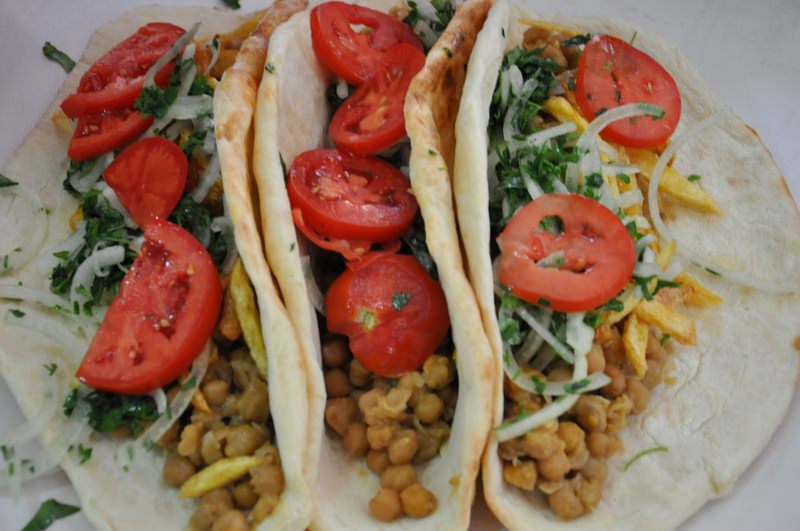 by daily sabah Sep 29, 2015 12:00 am
The chickpea wrap, a traditional taste of the southeastern city of Gaziantep, is becoming the preferred alternative to meat wraps with its distinct flavor and affordable price. More local citizens are buying chickpea wraps in the city, which is known for its baklava and traditional food. To make a chickpea wrap, the chickpeas are soaked overnight. They are then boiled with salt, black pepper, broth or bone added to the water. When the chickpeas are ready, they are spread on a lavash and crushed with the aid of a spoon. Salad and hot spices are added to the wrap. A chickpea wrap usually sells for 3.5 TL ($1.15), a price which attracts a lot of students who are generally on a tight budget.

Long queues are seen until noon in front of restaurants or cafes selling chickpea wraps. The wrap has become popular not only among local citizens, but also foreign tourists and students. Speaking to an Anadolu Agency (AA) reporter, Ahmet Kesen, a chickpea wrap chef, said the wrap is preferred as it is cheap, healthy as well as easy to digest. Kesen said they start preparations a day before selling the food. "First, we soak the chickpeas. Their crust is sorted out and chickpeas are washed. We cook them in large boilers for almost an hour. During the day, we continue to cook them in pressure cookers and offer fresh chickpeas. We cook in this way all day," Kesen said. He said they have customers from all social backgrounds come to try the chickpea wraps. "It costs 3.5 TL. We offer it with or without hot spice, yet locals like hot spices," he added. İsmet Coşkun, a local, said they consume chickpeas as it is a healthy option.

Pointing to the increasing price of meat, Coşkun said, "As the meat is expensive, we cannot offer as many meat wraps as we used to. If the situation continues, then locals will stop consuming meat wraps and eat chickpeas." Another citizen, Osman Yılmaz, also said he has been eating chickpea wraps since his childhood. "I eat chickpea wraps two or three times a week," Yılmaz said. He stressed that the chickpea wrap is among the city's best traditional dishes. Aiming to become a city known for its culinary class, Gaziantep has come to the forefront with its cuisine culture on both local and international platforms.
RELATED TOPICS