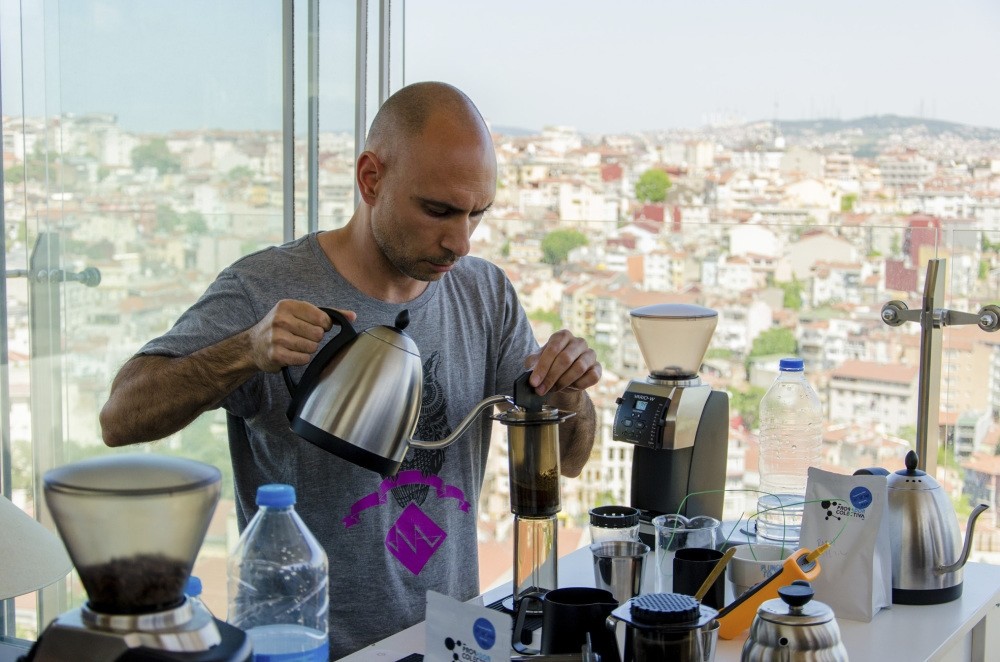 The elegant hotel rooftop overlooking the Bosporus was transformed into a laboratory as the competitors weighed their beans on miniature scales, ground them to the right coarseness and finally extracted a perfect blend of tang and acidity into a cup.
by Alanur Aydemir May 20, 2016 12:00 am

Turkey is undoubtedly a tea-drinking country. The fact that it is the world's fifth-largest producer of the plant is a testament to this. That, however, is not to say coffee does not play a role in Turkish culture; after all, it is tradition for a man to seal the deal of a woman's hand in marriage with a good cup of Turkish coffee - albeit with salt. Turkey is developing a new culture, one of well-brewed coffee incorporating various techniques to extract the perfect cup.

To recognize this new tradition coming from an old-time drink, the Ravouna 1906 coffee bar hosted the second Aeropress competition in Istanbul. The Ravouna is located in a building that belonged to the Ravouna family in 1894, which is one of the two best-preserved Art Nouveau buildings in Beyoğlu. The antique boutique designed by C. P. Kyriakides and A. D. Yenidunia that was built between 1901 and 1906 was a reaction to the architecture of time, as Kyriakides and Yenidunia suggested being new and modern as opposed to reviving ancient techniques adopted during the 19th century. Indeed, it is the ideal location that sets the current scene: Old coffee with the new concept of brewing. This unique method of brewing coffee was invented in 2005 by Alan Adler. It is intended to bring out the best in every bean by extracting the richness of the bean with less bitterness and acidity because of the low temperature and short brewing time without the coffee grounds in your cup. 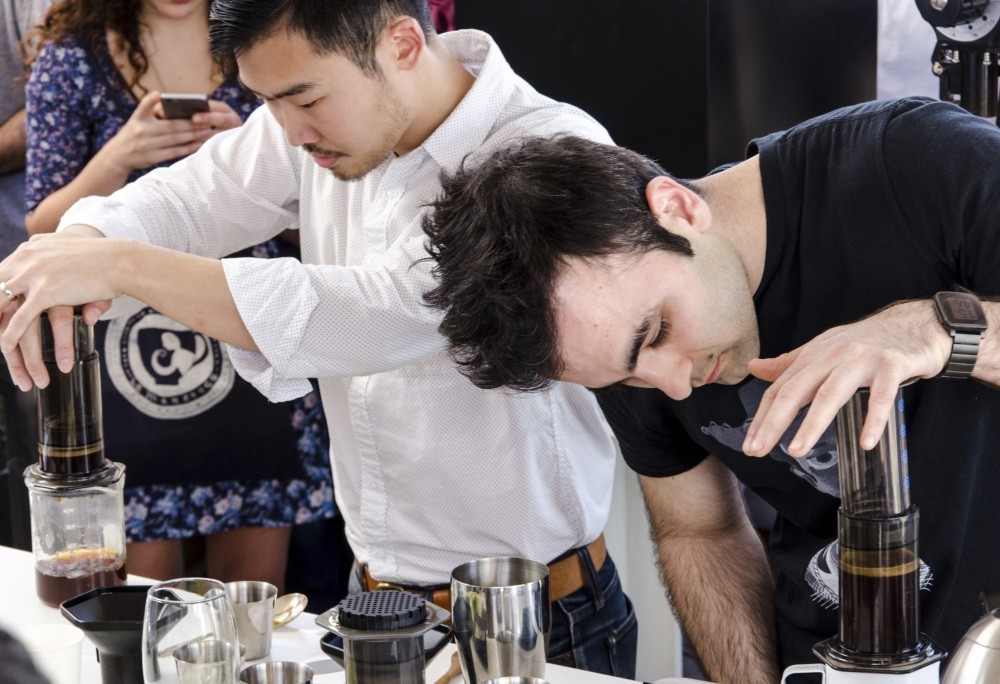 The competition was organized by the owner of Probador Colectiva and founder of Kronotrop, Çağatay Gülabioğlu, and it was as intense as intense as watching a rocket launch as the 27 applicants - including competitors such as Uğur Kara, a barrister at Coffeetopia, and Cem Bozkuş, last year's third-place winner, barrister and owner of Norm - were all battling for the golden ticket to Dublin and the opportunity to represent Turkey in the 2016 World Aeropress championship on June 23 at WigWam in Ireland. The elegant hotel rooftop overlooking the Bosporus was transformed into a laboratory as the competitors weighed their beans on miniature scales, ground the small brown beans to the right coarseness and finally extracted a perfect blend of tang and acidity into a cup.

The rules may sound simple - provide your recipe before the competition, extract 150 milliliters to 200 milliliters of coffee into a cup in eight minutes and use no more than the beans provided by Poblador and water, otherwise be faced with disqualification - were anything but simple. The competition, which consisted of three rounds, certainly had the pressure rising as competitors advanced to the following stages. While most competitors had turned coffee into a passionate career, there were certainly those who were there simply for the love of the cup. Michael Chung, who moved to Istanbul with his wife a year-and-a-half ago, had the crowd roaring when he advanced to the second stage by knocking off his fellow contestants. "I joined simply for the love of coffee and because my friends encouraged me" he said. 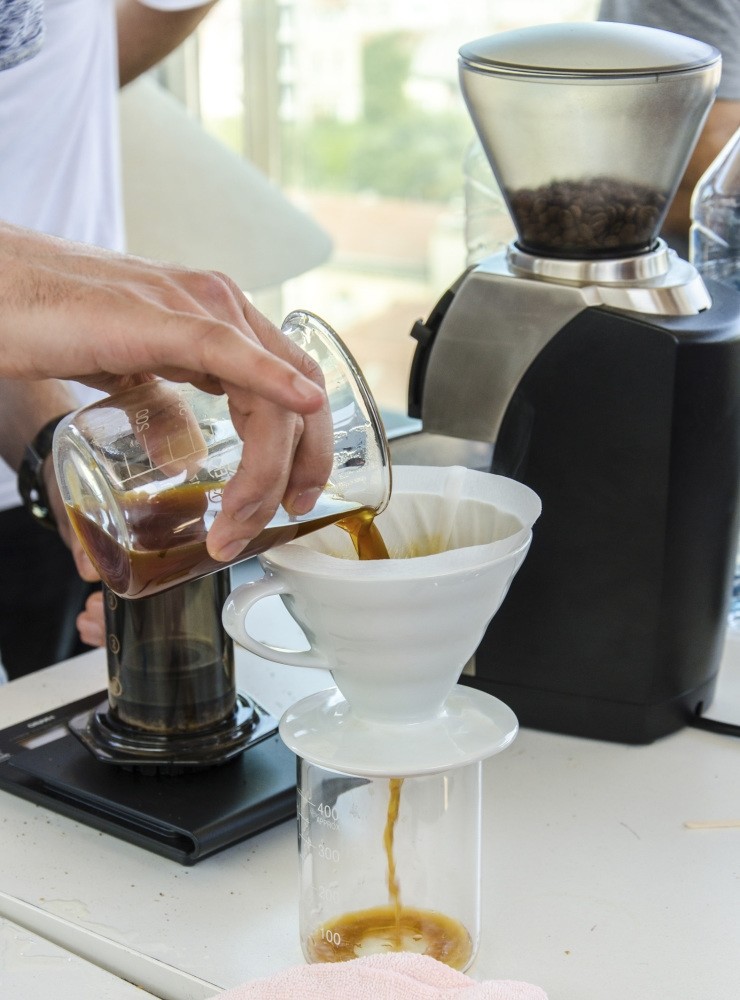 The competition included three judges. The first, Reza Kosar, the 24-year-old manager at Sam Coffee, is Iran's first Q grader - a 20-stage test designed by the Coffee Quality Institute that tests to objectively assess coffee quality, identify, quantify and articulate coffee characteristics, detect coffee defects and communicate coffee characteristics using common industry terminology. The second judge was Sofie Nys, also a Q grader finalized by Probador Colectiva, is a holder of the Antwerp 32 cup. The third judge was Okan Turfanda, a barrister at Ravouna 1906, who was accompanied by the Q grader and owner of Probador Colectiva, Gülabioğlu, to cast the deciding vote in case of a tie.

The finalist, who was the envy of all competitors was Barış İşcan, a certified yoga instructor and coffee enthusiast.
RELATED TOPICS