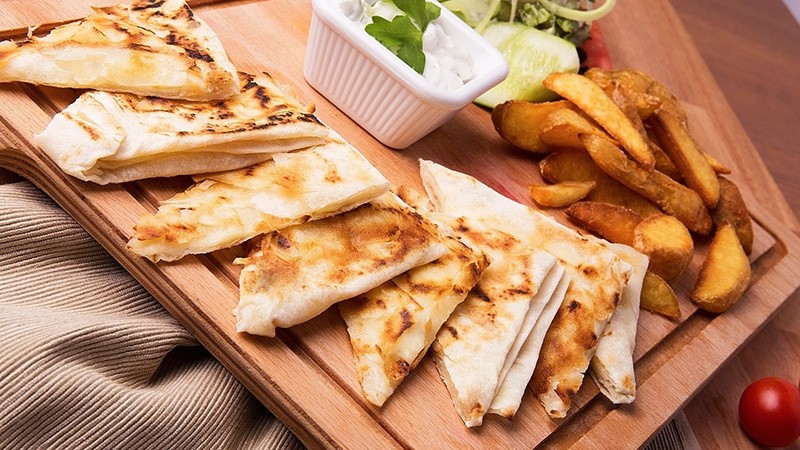 Whether eaten as a savory snack or for breakfast, gözleme (named for the "göz" or eyes [brown spots] that appear on the bread as it fries) gözleme is a mouth-watering food loved by nearly all Turks.

Primarily found in Anatolian towns and villages, gözleme can be found in cafes and restaurants in metropolitan cities where it is served as a delicious appetizer. Most Turks prefer to enjoy gözleme for breakfast while others enjoy it during the day for lunch or as a snack.

Made of hand-rolled dough which is lightly brushed with eggs and butter and filled with various toppings which include minced beef, chopped lamb, fresh or smoked seafood, vegetables such as spinach, zucchini, eggplant, onion and potato, or mushrooms and cheeses, these delicious "fillings" are sprinkled onto the dough before the dough is closed up and put in hot oil to fry.

In Turkey, every region has its own variation of gözleme. When you visit Anatolian towns for example, you will see older women sitting on the ground at a large, wooden "sofra" or short table where they prepare the dough of the gözleme.

A gas-powered sac griddle can be seen near the tableside to cook gözleme. With wooden rolling pin, which is called oklava in Turkish, is used to prepare the dough to fill toppings in it.

They ask you what toppings you want and then they make your gözleme in front of you. Maybe this is one of the reasons that in Anatolian cities, gözleme tastes better than the ones you try in a café or restaurant.