You call it traditional Turkish dumplings, we call it 'mantı' 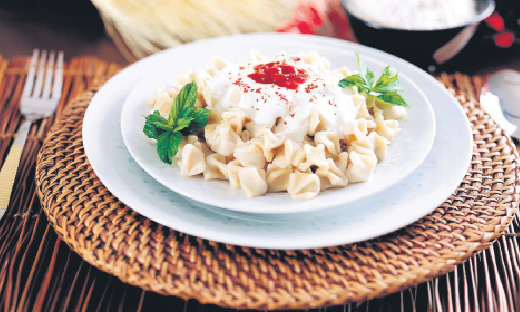 by Sena Alkan Oct 22, 2016 12:00 am
A popular dish in Turkic cuisine from the Uyghurs to the Caucasians, Turkish Mantı is one of the most popular dishes in the Turkic region. Each Turkic country has its own unique way of making mantı while Turkey itself features different forms of this delicious dish which varies from city to city. In Turkish cuisine, mantı is made with thinly rolled dough cut into tiny squares and stuffed with a seasoned mixture of ground lamb or beef which are baked briefly before being boiled in hot water and served with yogurt and a spicy garnish of melted butter and cayenne.

"Mantı" dumplings vary in size by Turkic region, with the most famous Turkish mantı hailing from the Central Anatolian city of Kayseri. In traditional Kayseri cuisine, the size of the dumplings is extremely small, so much so that some believe more than 50 dumplings can fit into a single spoon. Another type of mantı is known as "tepsi mantı" or "tray mantı" which is growing in popularity across the country. This type of mantı is cooked in a giant steel tray in the oven. On the other hand, "kızarmış mantı" or fried mantı is also popular in the country but tastes a little bit tough compared to traditional Turkish mantı.

Among my favorite places to eat mantı is Aşkana Mantı, located on Nispetiye Street in Istanbul's ritzy district of Etiler. This place tops my list and if you are looking for the best mantı in town, Aşkana should be your first stop. This mantı house does not accept credit cards so please remember to bring cash on your visit.

As a mantı connoisseur, my first stop to eat the superb mantı in the capital city of Ankara is Nefise'nin Yeri. Made by the hands of Caucasian women, this mantı is simply mouthwatering. Located in the Çankaya region, Nefise'nin yeri is one of the most visited mantı houses in Ankara.

Hunkcu is the best place to eat mantı in the western city of İzmir. With its wide demographic profile ranging from Armenians to Greeks, İzmir's dishes have their own unique style. The same also goes for mantı. Hunkcu prepares its mantı in the Caucasian traditional way.