Brexit takes a toll on Toblerone, leaving it with more 'gaps' than peaks 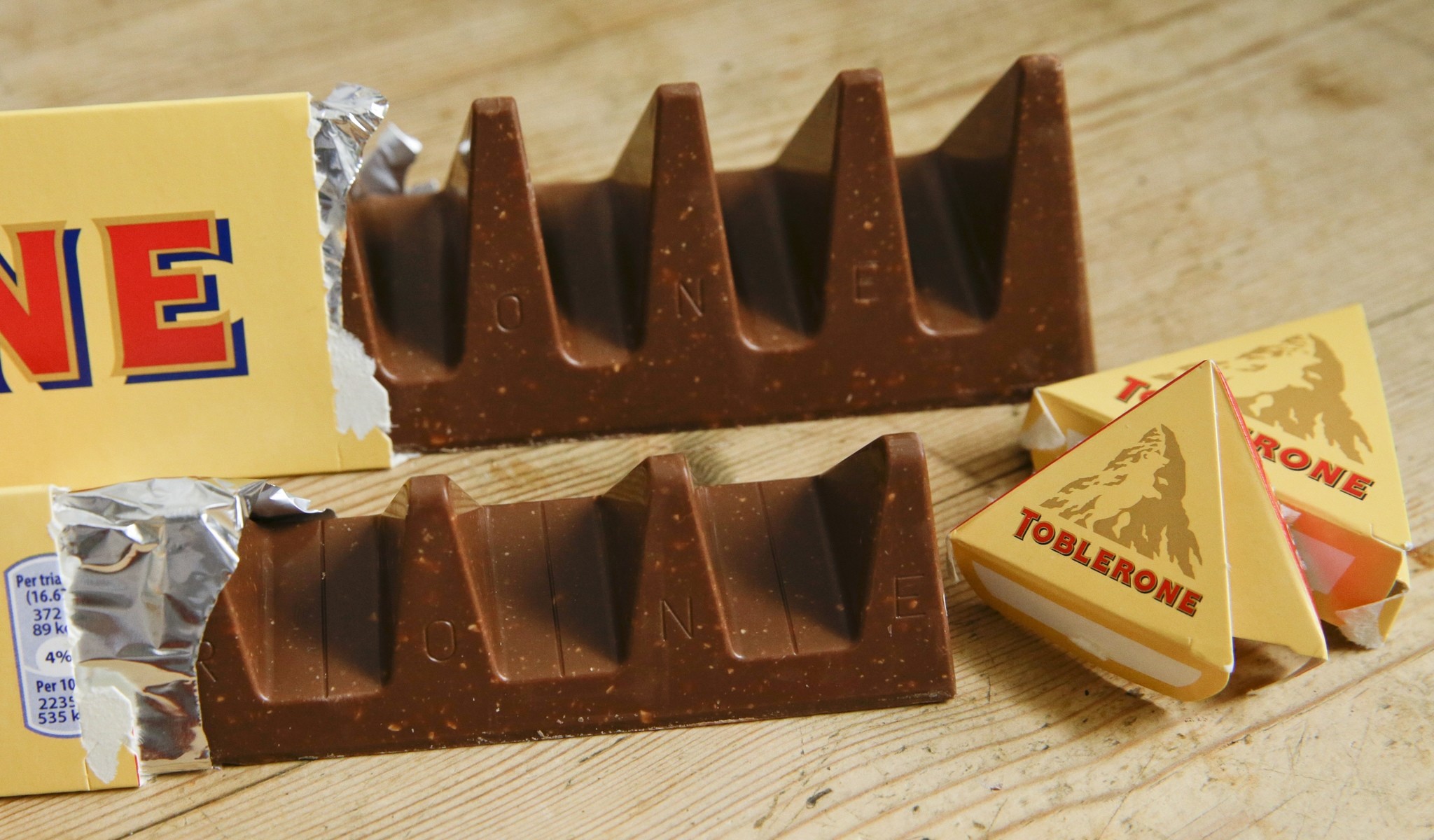 In this photo illustration two bars of the Toblerone Swiss chocolate are shown, at front is the new style 150 gram bar showing the reduction in triangular pieces. (AP Photo)
by Nov 08, 2016 12:00 am

British fans of Toblerone chocolate bars have bared their sweet teeth over a cost-cutting move to space out the distinctive jagged peaks on versions of the Swiss treat sold in the UK.

The scaled-down version was prompted by higher commodity prices and had nothing to do with the British pound's plunge in value since Britons voted in June to exit the European Union, manufacturer Mondelez International said.

All the same, a Tobler-moan broke out on social media in Britain as it was the third case in a month in which UK brands have taken steps - including hefty price rises - to offset higher costs for their products in the wake of the Brexit vote.

"This must be up there with the dumbest corporate decisions of all time," Toblerone customer Michal Tat posted. "You have a somewhat premium chocolate bar which is very well known for its distinctive shape, and to save money you change the shape? Now you have a premium-priced product that looks like a weird knock-off of itself....Shame on you, Mondelez."

"It's not as if people eat Toblerone every day. You could literally double the price and people would still buy it. Fools," posted Nicholas Barker.

Mondelez reduced the weight of a version of Toblerone sold to British discounter Poundland to 150 grams from 170 grams by spacing its triangular chocolate peaks out more widely.

Another altered version, lightened to 360 grams from 400 grams, is sold in stores other than Poundland, a Toblerone spokeswoman said.

While denying that the reductions were related to any consequences of Brexit, Mondelez said on Tuesday that Toblerone bars would continue to be sold elsewhere without changes.

"We always work hard to ensure we offer value for money for our consumers, but like many other companies, unfortunately we are experiencing higher costs for many ingredients," theToblerone spokeswoman said.

"We carry these costs for as long as possible, but to ensure Toblerone remains on shelf, is affordable and retains the iconic shape we all know and love, we have had to reduce the weight of this particular bar (for the UK market)."

Mondelez exports Toblerone to 120 countries from a Swiss plant in Bern. Its main sales channel is duty-free outlets.

Sugar prices have risen about 45 percent this year. Milk prices have also started to rise, boosted by a pick-up in demand and tighter supplies in the EU. Cocoa prices have been weaker this year but remain comparatively high after hitting a more than four-year peak late last year.

Unilever was the first to move with an attempt to impose 10 percent rises on a host of big brands like savoury spread Marmite, Pot Noodle and Magnum ice cream last month, triggering a dispute with supermarket group Tesco .

A bag of Britain's biggest-selling potato chips is set to rise by 10 percent after maker Walkers said this week the sterling slump had pushed up manufacturing costs.