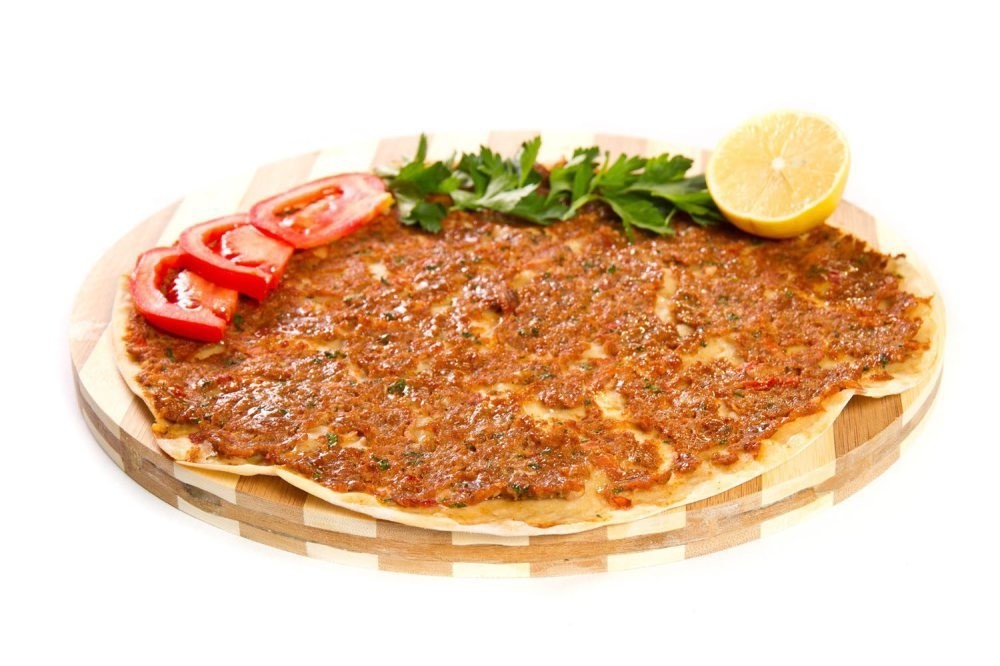 by Sena Alkan Nov 19, 2016 12:00 am
Lahmacun is one of the most popular fast-foods in Turkey. With thin-crispy dough and a delicious combination of minced meat, lamb or beef, mixed with fresh chopped onions, garlic, parsley, peppers and tomatoes, it qualifies as one of the healthier fast-foods around. Also known as "Turkish pizza," lahmacun has a unique combination of fresh ingredients and complimentary spices, including paprika, red pepper flakes and, occasionally, cinnamon. Similar to pizza, the spicy mixture is spread over the thinly rolled dough and baked in natural wood-fired ovens. It is generally served with ayran, a traditional Turkish drink consisting of yogurt, water and a pinch of salt, or "şalgam," a sour-spicy beverage made from turnips. Traditionally, lahmacun is topped with lettuce, sliced tomatoes, onions and a sprinkle of lemon juice, then rolled and eaten like a wrap.

For many, lahmacun immediately brings to mind Turkey's southeastern region, especially the Urfa and Gaziantep provinces where lahmacun originated. Each province has its own style of lahmacun, all of them unique with its own connoisseurs. Lahmacun is also popular in Armenia, Lebanon and Syria. Even though the dish has existed for thousands of years, it has recently started becoming popular over the past few decades. The true origin of lahmacun is a mystery, although most can agree it originated either in Turkey or Armenia. The two countries both claim creation, even though their traditional lahmacun recipes bear no resemblance to each other.

The best place to eat lahmacun in Istanbul is Tatbak, located in Istanbul's Nişantaşı district, where you can order several variations of traditional lahmacun. The most popular recipes at Tatbak are the garlic lahmacun, prepared with a dominant garlic flavor and, for those wanting a more traditional experience, cıtır lahmacun (crispy lahmacun).
RELATED TOPICS