Fresh sea beans with a touch of olive oil 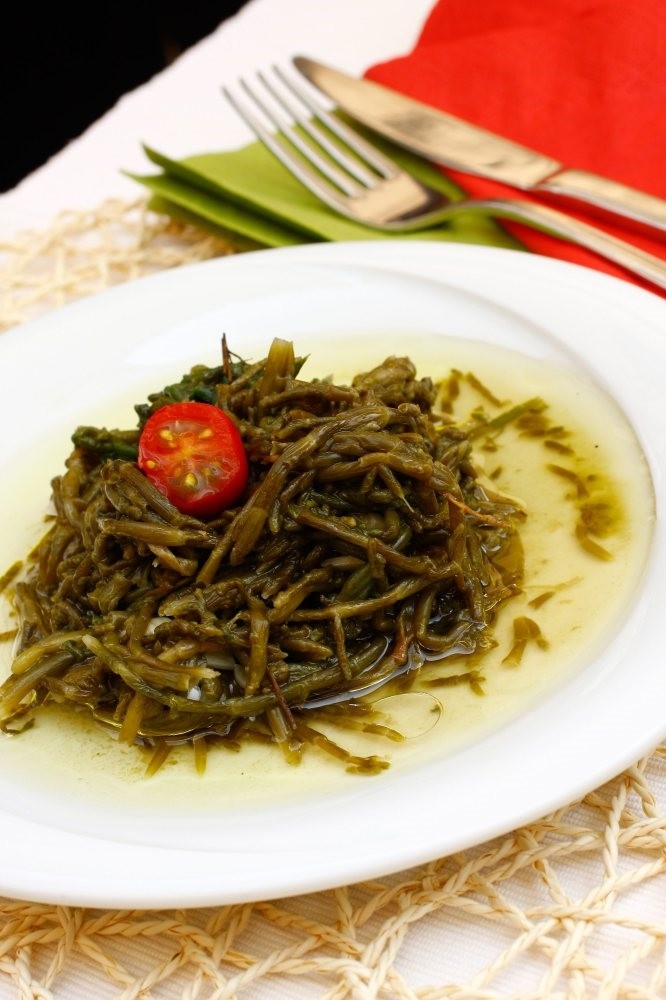 by Daily Sabah Apr 15, 2017 12:00 am
Whether you call them sea beans, Salicornia or saltwort, they are a fantastic dish to have on your table. Not quite hardy enough to be the main course, sea beans are more of an appetizer or a side dish, but are guaranteed to bring an authentic touch to your dinner table.

Since sea beans only grow in salty environments, they are usually found along the seashore during the summer months. As a result, it is no surprise that sea beans are one of the main foods found in Mediterranean or Aegean cuisines. In fact, what makes sea beans so fantastic is that you can find them on virtually every coastline.

Bright green sea beans have 2 to 6 centimeter-long, horn-like branches growing opposite each other up the stems. Along the small branches lie tiny, scale-like leaves that resemble small shields. Sea beans will slowly turn red as the weather gets cooler, the color change occurring once the stems become woody and too salty. So, make sure to serve them during their peak season.

Sea beans are high in protein and are a good source of vitamin A, calcium and iron. They are best when either served raw or lightly blanched. They can be a side dish with your fish which intensifies the aroma as well as the taste.

In Turkish cuisine, sea beans are served as an appetizer with olive oil and yogurt. To make this delicious appetizer for four people you would need two or three bunches of sea beans, three cloves of garlic, a half a tea glass of olive oil and two spoons of pomegranate syrup to give it a slightly sour tang.

Wash the beans thoroughly and clean their roots. Put them in a large cooking pot with the garlic and boil them for about 15 minutes. Boiling is a crucial step for cleaning the hard, woody parts inside the beans. After 15 minutes in the boiling water, drain the sea beans and let them cool. If you are in hurry, you can also put them under cold water, but it is not recommended. Once the beans are cool, the toughest step of this dish begins. The woody parts of the beans must be cleaned by skinning the edible green parts. Once you are done, now comes the easy part: Preparing the sauce. Put the olive oil, pomegranate syrup and some crushed garlic in a small bowl and stir it carefully. Put the sea beans on your service plate and pour the sauce over the dish.
RELATED TOPICS