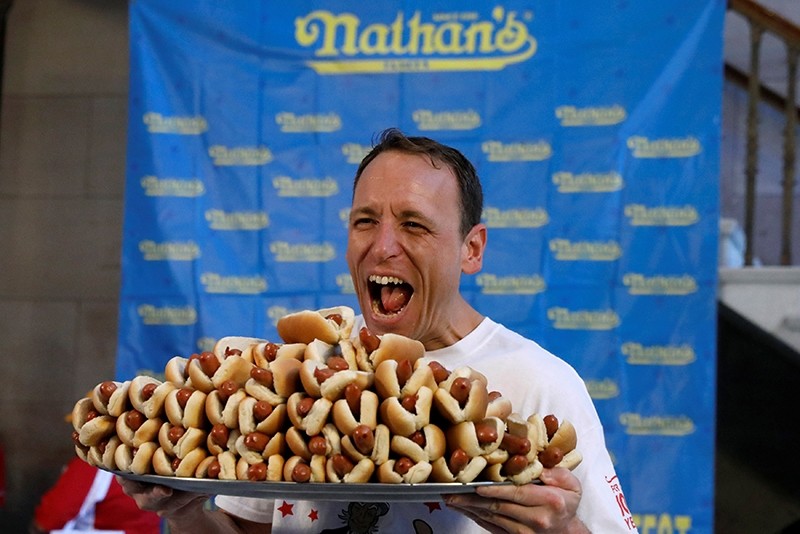 A 33-year-old California man broke his own record Tuesday by downing 72 hot dogs in an eating contest held annually July 4 at a New York amusement park.

Joey Chesnut consumed the 72 hot dogs and buns in 10 minutes to take first prize and break the record of 70 hot dogs in 10 minutes he set one year ago. It was Chesnut's second consecutive win in the hot dog-eating contest at Coney Island and 10th overall.

"I treat competitive eating like a sport, it's not like going to a buffet," Chesnut told sports broadcaster ESPN.

He was awarded the coveted Mustard Belt, which resembles the winners' belts awarded to professional boxers.

Second place in the men's competition went to Carmen Cincotti, who ate 62 hot dogs in 10 minutes.

The contest is sponsored by Nathan's Famous hot dogs and was first held at Coney Island in 1916 on the U.S. Independence Day holiday.

Before the contest participants train their stomach by stretching them to two- to three-times the normal size.

Eating contest have become popular in the U.S. and various forms are held across the country throughout the year. Some have ended tragically. In April, a 20-year-old student from New Jersey choked to death in a pancake-eating contest. On the same day a 42-year-old man from Denver, Colorado, died in a doughnut-eating contest.