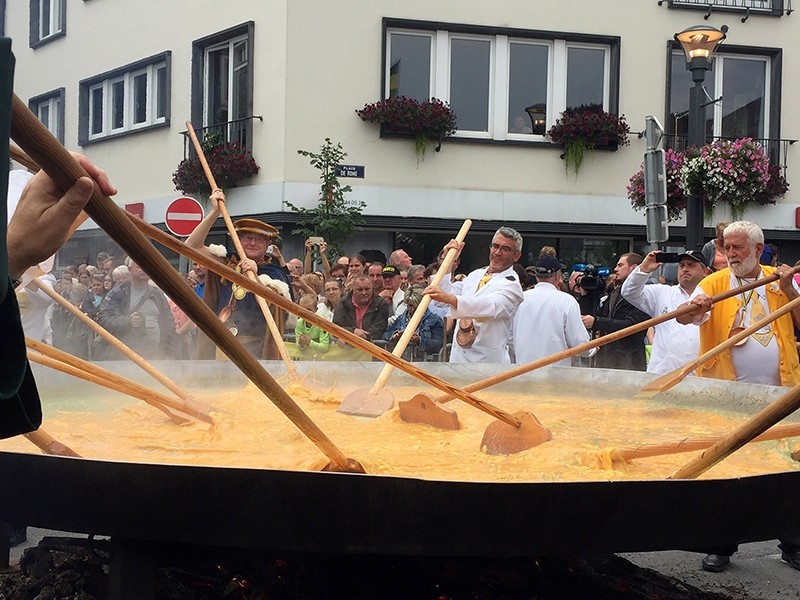 About a thousand people flocked to the small Belgian town of Malmedy on Tuesday to eat a giant omelette made of 6,500 eggs, despite the country being at the center of a scandal involving tainted eggs.

Millions of chicken eggs have been pulled from European supermarket shelves as a result of the scare over the use of the insecticide fipronil, which is forbidden in the food chain and can cause organ damage in humans.

"We were hit full-on by the tainted eggs scare," Rene Bourguignon said as he waited to prepare the omelette.

While at least 1,000 people braved rainy skies to get a bite, the turnout was far below last year's record 7,000.

The local branch of the World Giant Omelette Brotherhood has been organizing the festival in Malmedy for more than 20 years. 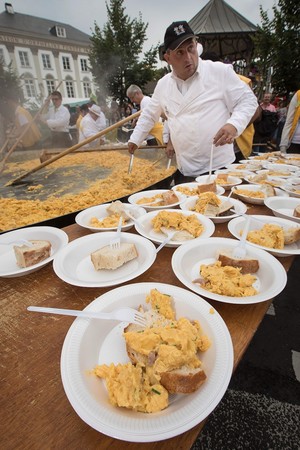 It spent a week preparing for this year's culinary opus, collecting 6,500 eggs from carefully selected places instead of the usual 10,000.

"We have total confidence in our local products, our suppliers are local and they fulfilled every health guarantee we asked of them since the beginning," Bourguignon said.

The number of attendees was a good sign, the Brotherhood's "grand master," Jean-Pierre Gilles said.

"Of course, the public may have had its doubts and we did fear that a little, but seeing the numbers of people we saw today, I think it all went very well," Gilles said.

"Any doubts were swept away by friendship and warmth."

Made simply with eggs, bacon, oil and chives, and cooked over a wood fire, the omelette has been a fixture of the annual festival since the 1990s when Belgium was hit with a similar scandal -- over chicken and eggs contaminated with dioxin, a known carcinogen.

Traces of fipronil found in the contaminated eggs are at very low levels.

"The media said you needed to eat eight eggs a day" for the insecticide to affect your health, local volunteer Gabiche Chleck said.

"Personally, there's no way I could eat all that."