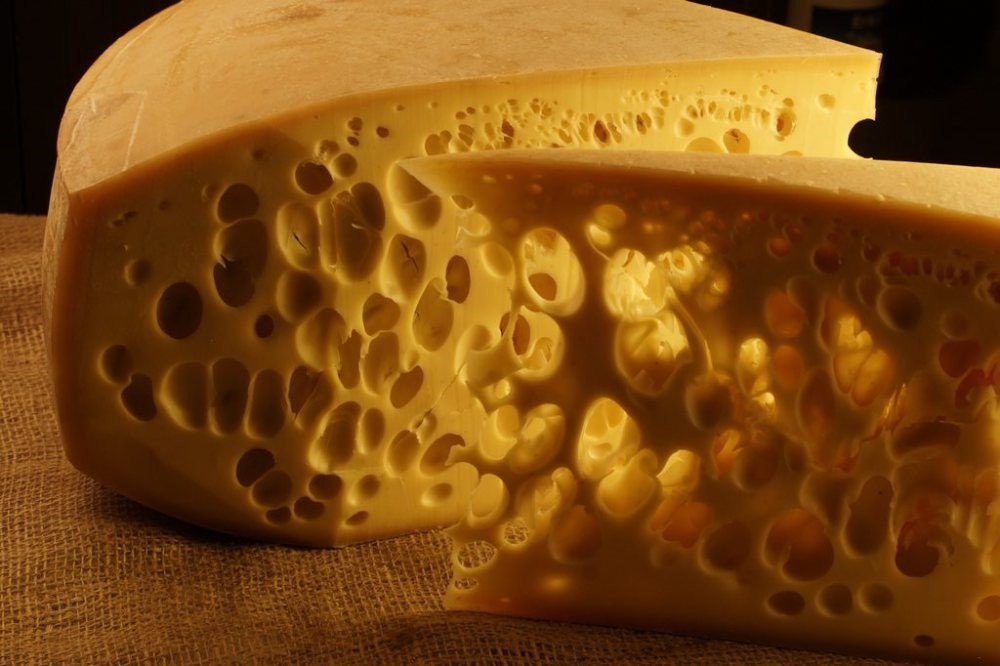 Made of the milk from Zavot cows raised in the village of Boğatepe in Kars, and called ‘the king of cheese,' Kars gruyere leaves a matchless taste in the mouth

On the windswept fertile plains of Kars, a prominent place in Turkey's cheese-making industry, people take their livestock to the highlands to feed on the lush grass and wild herbs at an altitude of 2,400 to 2,840 meters.

This is where the villagers produce their version of gruyere. Named after a Swiss village, proper gruyere is creamy, unpasteurized, semi-soft cheese. The natural, rusty brown rind is hard, dry and pitted with tiny holes. The cheese is darker yellow and the texture is more dense and compact than other cheeses. Slightly grainy, the cheese has a wonderful complexity of flavors -at first fruity, later becoming more earthy and nutty.

Kars gruyere, on the other hand, is made of high-fat cow's milk. It looks like Swiss gruyere cheese, tastes like Swiss emmental cheese and takes 10 months to age. There are holes of one to two centimeters in the cheese, and if the holes are both big and small and irregular, it means the cheese is not of good quality.

Producing this special cheese is result of quite an exhausting process. Villagers in Kars first take the milk from Zavot cows fed in the highlands to dairies. There, the milk is boiled until it gets lumpy. The filtered curds are taken from the vessels and fixed into thin filter packages. The curds are filtered slowly and then put into the molds. Loads are fixed on the molded cheeses and the filtering process goes on for a few days more.

Then, the cheese is put in a cool room to air for two to three days. It is then left in brine to stiffen. After a while, they are placed in a mild room and left again. Lastly, they are taken to cold storage to age.

Put on sale after at least a six-month stay in the storage, this type of gruyere is only ready to consume after this long and tedious long process.

The head of Boğatepe Foundation for Environment and Life and dairy owner, İlhan Koçulu told Anadolu Agency that gruyere has an important place in Turkey.

"Gruyere is known as the king of the world of cheese. Why? For two reasons. First, it dates back to the 13th century. Second, it has a shelf life of four years. The protein and the nutritive value in 100 grams of gruyere are higher than those of in 100 grams of meat. Hence, gruyere has a crown of a king," Koçulu said.

Underlying the importance of the highlands around Boğatepe, Koçulu said, "Our 56,000-decare pasture is at an altitude of about 2,400 to 2,840 meters and it has alpine plant diversity with 680 different plants. The quality of the milk from the cows grazing there affects the cheese. Our cows are Zavots, which is a fertile and disease resistant kind. We produce gruyere by using this animal's milk in May, June, July and August. This cheese gets its color from the plants and flowers that the cows eat. A half an hour after milking, the milk is cooked in copper vessels and the maturing process is completed in a 120-day process. Then comes the second phase."

He said that they set up production at three dairies in the village and one in the city of Kars.

"Our production was about 45 tons two years ago, but the number doubled with the increase in the number of livestock. Currently we have approximately 30 to 35 tons of gruyere per day from the 3,700 Zavot cows in our village. Now, the yearly gruyere production is about 80 to 85 tons. Gruyere became a cheese in great demand," he added.

"We produce gruyere with a meticulous process like a mother raising her baby. Our production will increase in the following years as the number of our livestock goes up. This cheese is a national wealth for Turkey. Now, Anatolian cheese and Kars gruyere are about the take the position they deserve on the world stage and everyone knows that these cheeses are produced in Turkey," he finished.