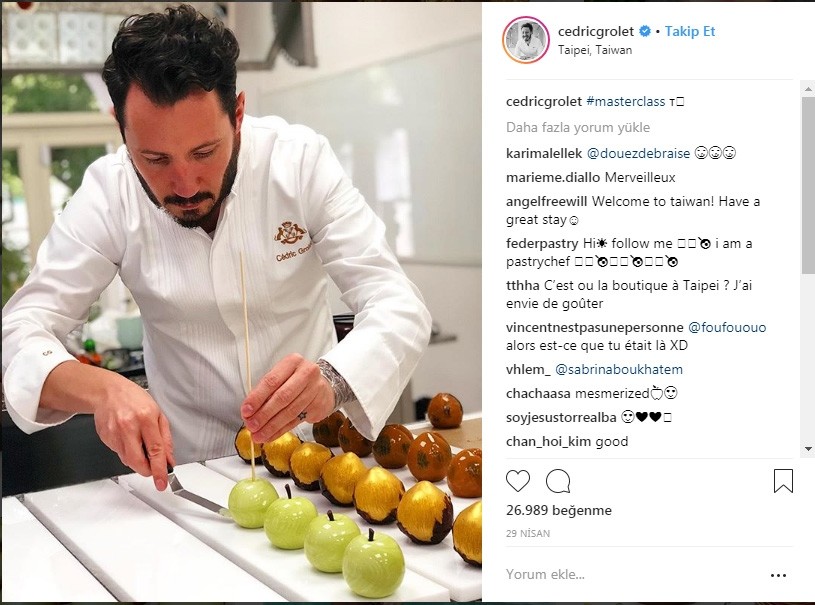 When Cedric Grolet takes out his pastry knife, millions of mouths water.

The young Frenchman, named the top patissier on the planet last month by The World's 50 Best Restaurants list, is an Instagram superstar.

Videos of him slicing through the exquisite fake fruit he creates to reveal their taste bud-teasing interiors get millions of views on social media.

Millions more drool over images of his glossy hyper-realistic pears, apricots, lemons, peaches and even tomatoes, with Vogue - a magazine not known for its championing of high-calorie desserts - saying they "leave you wanting to lick the screen."

"His fans cry, fall into his arms and demand autographs" and selfies, said the usually sober French daily Le Monde.

With high tea at Le Meurice featuring his cakes sometimes booked weeks in advance, Grolet opened a tiny boutique in Paris in March.

Its shelves empty within hours every day.

His Rubik's cube cake, which pivots just like the real thing, has become a cult on the fashionable Parisian dinner circuit, although at 170

euros ($200) for a cake for six, only those with the deep pockets can afford it.

Grolet has even made a blue, white and red version to celebrate France's World Cup win earlier this month.

Like the members of the French football team, he is something of a working-class hero.

Eating with our eyes

The son of a hairdresser and truck driver from a small town near Saint-Etienne in central France, his moment of revelation came when he was only 13.

"A farmer gave me a basket of strawberries for helping him pick his crop, and I made a strawberry

tart with them for my grandfather," who ran a small hotel nearby, he told Agence France-Presse (AFP).

It went down so well that Grolet left school early to apprentice himself to the village baker.

"I would make bread all night so that I would be allowed to make the desserts at 11 in the morning. My reward was to be able to slice the apples and cover the tarts in strawberries."

He later studied fine patisserie and began winning prizes before leaving to make his name in Paris aged 20. There he worked for the French gourmet food and delicatessen chain Fauchon, which eventually sent him to Beijing to help train its staff there.

It was also at Fauchon that he worked alongside Christophe Adam in its research laboratory, developing new recipes.

Like Adam, who has since founded L'Eclair de Genie, a chain in France and Japan, Grolet has been crowned French patissier of the year and hailed by macaroon guru Pierre Herme as "one of the most talented patissiers of his generation."

Grolet followed Adam to the exclusive Le Meurice, which is owned by the Sultan of Brunei. He now works there as pastry chef under celebrity cook Alain Ducasse, who urged him to "work even more on taste."

"Visual beauty attracts the customer, but it is the taste that makes them come back," said Grolet, who as a millennial himself knows that Generation Y eats with its eyes.

The fact that his creations are not overly sweet has also endeared him to the calorie-conscious beautiful people who queue every day outside his mini-boutique, the first of what Grolet hopes will be a handful across the world.

He began perfecting his extraordinarily delicate fruit six years ago, with their highly worked lifelike skins made from chocolate, with a mousse or marmalade interior made from the real fruit.

"The idea was to do away with the biscuit, the eggs, all the things whose taste doesn't really do anything and to concentrate on the taste of the fruit," Grolet told AFP.

It is what he calls "naked patisserie."

His tarts have a similar hyper-natural edge, with fruit as finely cut as flower petals.